“Climate Change”: A Leftist Excuse to Redistribute Wealth and Destroy the West? 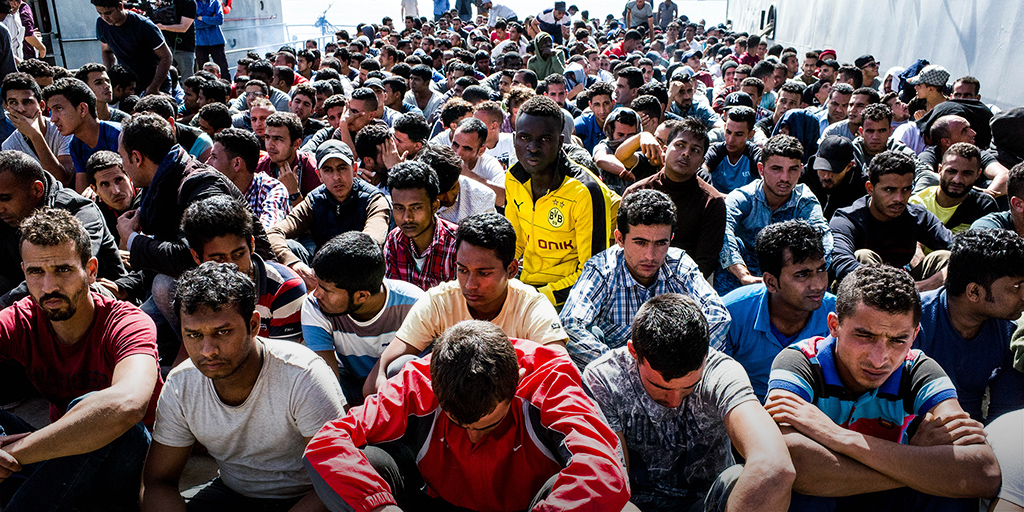 The “Church of Climate Change” demands that Western nations impose restrictions on industrial CO2 emissions, encouraging them to squander billions on unreliable “green” technologies and renewable sources of energy. They continue to ignore the one policy that has significantly increased atmospheric CO2 levels in the last few decades, generating hundreds of millions of metric tons of the stuff annually: mass Third World immigration (see Kolankiewicz and Camarota, 2008).

If the IPCC were objective, they would demand an end to mass immigration, instead of more carbon taxes and emissions trading. Such indifference in the face of the evidence shows that they care more about racially dispossessing whites than they do about “saving the planet.”

So what is the ulterior motive? To further understand what this may be, we must examine the career of Canadian businessman Maurice Strong (1929-2015). Thanks to his tireless “lobbying behind the scenes,” the UN has played a key role in forging a “consensus” on man-made global warming. In a sense, he was the right man at the right time. Besides his ability to manipulate others, Strong was aided by other factors, such as the collapse of Soviet communism in the early 1990s. This helped pave the way for the emergence of a new leftist orthodoxy: environmentalism.

Strong was an ardent believer in the efficacy of state redistributive policies. In 1976, Strong told Maclean’s magazine: “I am a socialist in ideology, a capitalist in methodology.”

Like his socialism, his environmentalism was also pragmatic, rather than ideological. Its purpose was to advance his vision of global governance under the aegis of the UN. In a 1992 essay, he wrote:

It is simply not feasible for sovereignty to be exercised unilaterally by individual nation-states, however powerful. It is a principle which will yield only slowly and reluctantly to the imperatives of global environmental cooperation.

Strong was the most active and influential member of the Brundtland Commission, established by the UN General Assembly in 1983. The Commission’s report, Our Common Future, was published in 1987. Strong helped formulate the report’s concept of “sustainable development.” This was a call for social and economic egalitarianism within a simple Marxist dialectical framework. The antagonism between capitalist and proletarian worker mirrored the antagonism between industrialized and developing nations. The First World was identified as the primary culprit behind Third World underdevelopment. Its need for raw materials forced developing countries to over-exploit and deplete their natural resources, leading to more environmental degradation and underdevelopment. The solution is more money to the developing world from rich Western nations.

Strong’s participation in the Brundtland Commission ensured that man-made global warming and socialist redistribution would be incorporated into the report. These would subsequently form the basis of UN environmental policy. This would become so influential that Western governments would try reversing the effects of the Industrial Revolution in their own countries through restrictions on CO2 emissions and increasing dependence on unreliable biofuels and green technologies.

In 1988, Strong had convinced the United Nations Environment Program (UNEP) and the World Meteorological Organization (WMO) to agree to the formation of an “intergovernmental mechanism” to monitor anthropogenic global warming and suggest policy recommendations for the UN and Western governments. This organization was the IPCC (Intergovernmental Panel on Climate Change).

Through the IPCC and other UN bodies, enormous sums of money were transferred from the West to Third World countries. In 2010, the Green Climate Fund (GCF) was established; its purpose was to further the UN goal of socialist redistribution in the name of sustainable development. Obama pledged $3 billion to the fund in 2014, with the fund receiving a total of a $1 billion by 2017.

However, not all Western politicians subscribed to the false humanitarianism of the UN’s avowedly socialist redistributive aims. Trump promised during his election campaign to withdraw from the Paris agreement. In his withdrawal speech on June 1, 2017, he criticized the GCF as a “scheme to redistribute wealth out of the United States … to developing countries.”

Strong once posed the rhetorical question: “Isn’t the only hope for the planet that the industrialized civilizations collapse? Isn’t it our responsibility to bring this about?” His advocacy of socialist redistribution reflected an open hostility to Western industrial society, which had (in his view) impoverished and underdeveloped Third World societies. “If we don’t change,” he said, “our species will not survive … Frankly, we may get to the point where the only way of saving the world will be for industrial civilization to collapse.”

Why else have so many globalists backed the outsourcing of the West’s manufacturing base to the developing world? In the Brundtland Report, Western governments were advised to pursue less energy- and capital-intensive productive activities to promote sustainable development. The result, of course, would be the managed de-industrialization of the Western nations, with the aim of placing them on an equal footing with the developing world. If social inequality and environmental degradation were the result of industrialization, then de-industrialization would return the West to the way it was before the Industrial Revolution. This, of course, was the clandestine purpose of Maurice Strong and the IPCC.

Strong’s wish to dismantle industrial civilization was profoundly anti-Western. As of 2019, China is responsible for over a quarter of all global CO2 emissions, making it the world’s biggest polluter, yet the burden of reducing CO2 is entirely shouldered by the West. This burden includes payment of carbon taxes, implementation of cap and trade policies, and development of green technologies and renewable sources of energy, all entirely white, Western endeavors.

Not only is the environmental movement anti-capitalist, but as Václav Klaus (2008) explains, it is profoundly misanthropic and life-denying:

If we take the reasoning of the environmentalists seriously, we find that theirs is an anti-human ideology. It sees the fundamental cause of the world’s problems in the very expansion of homo sapiens. Humans have surpassed the original scope of nature through the development of their intellect and their ability to reshape nature and make use of it. Not coincidentally, many environmentalists refuse to place human beings at the center of their attention and thinking.

Research and development is necessarily energy- and capital-intensive; if fossil fuel consumption is drastically reduced by limiting CO2 emissions and encouraging dependence on unreliable biofuels and green technologies, how would man ever progress, scientifically and technologically, as a species? Environmental ideology demands the end of progress in the name of ecological sustainability. If practiced on a large scale, it will lead to the abolition of Western civilization. Environmentalists regard humans as subordinate to nature, investing the natural world with greater moral worth. If taken to its logical conclusion, mass extinction of the human species would be the best possible outcome for the planet.

At its core, environmentalism is a nihilist belief-system that rejects humanity in favor of nature. It is dangerous because it threatens the Faustian character of Western civilization, suppressing all deviation from leftist orthodoxy. By limiting the sphere of discourse through political correctness, environmentalists create an atmosphere of intimidation where they can indulge their hatred of Western civilization under the guise of “saving the planet.”

What environmentalists fail to understand is that man belongs to nature. His impact on the environment is no different from the impact of other endogenous processes. In nature, these are overcome through adaptation and divergence, not optimal or steady-state equilibrium. This is why environmentalist aims are naively utopian. If vast geological timescales reveal wide divergence in global temperatures, sea levels, atmospheric CO2 etc. then believing that one can turn the “climate knob” back to some ideal temperature through “sustainable development” is laughable.

Man-made global warming is a non-issue. Not only has it never been scientifically proven, but its purpose is to manipulate the masses, using alarmist rhetoric, into abandoning Western industrial society by fanning mass hysteria to fever pitch. Once this was done, getting the electorate on board with curtailing Western scientific and technological development would be a cakewalk. As an ideology, environmentalism is just black-and-white moralizing within a simple Marxist dialectical framework. The truth is that leftists have no interest in the environment; if they did they would be neo-Malthusian advocates of zero population growth in places like Africa and the Middle East.