Chilliwack, BC, Forced To Become “City With Most Rainbow Crosswalks in the World” 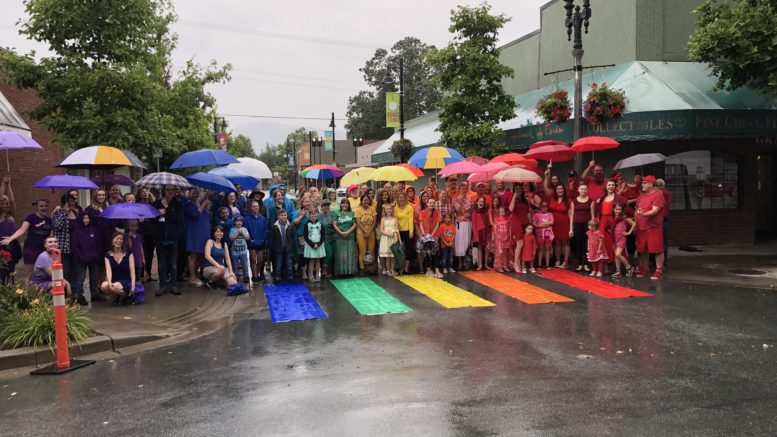 As I was driving in my hometown of Chilliwack, BC, I looked up to see our Canadian flag flying proudly in the wind. To my dismay, only half of our flag was there, tattered and torn asunder by high winds that had whipped though our community a couple of days earlier. I thought what an apt metaphor for Chilliwack and Canada! What an innovative symbol for our Canadian disunity! There is no point in replacing the flag with a new one because it accurately symbolizes the ripped fabric of our Canadian society manifested in the sad state of affairs in Chilliwack and in other communities across the nation.

What is happening in our Canadian towns and cities?

Back In 1984, Chilliwack, formerly known as ‘Rainbow Country’, promoted the area between Chilliwack and Boston Bar to tourists in advance of Expo ’86. Today it is living up to its slogan as never before. Now may be a good time to revive the ‘Rainbow Country’ slogan to promote tourism again to the area to see all the rainbow crosswalks!

You know the winds of change are blowing when a Chilliwack Progress headline announces, “Chilliwack becoming city of rainbows”. How is that even possible when our City Council voted in September to deny a proposal for the installation of a rainbow crosswalk in downtown Chilliwack? Did you think that residents and particularly children were protected from the LGBTQ agenda? Think again!

Apparently since the City Councillors voted ‘no’ on the LGBTQ proposal, the activists have been more determined than ever to make a statement by turning one of the most conservative cities in the Fraser Valley, a region east of the Vancouver Lower Mainland, into one of the cities with the most LGTBQ rainbow crosswalks.

Amber Price, the organizer behind this rainbow crosswalk idea, is leading the charge with an application to the “Guinness World Records” to create a new category, “Most Rainbow Crosswalks in a City”. Their intention is to flood Chilliwack with rainbow crosswalks to show their power and push their LGBTQ agenda. This group, who professes to be tolerant and compassionate, demonstrates by their actions anything but those values! They espouse diversity but this latest rainbow crosswalk campaign clearly shows a lack of open-mindedness about ideas that question turning Chilliwack into a propaganda tool for the LGBTQ hustlers.

This appeal to be a world record holder of the “Most rainbow crosswalks in a city” is a call to action for LGBTQ activists and rainbow crosswalk supporters to paint Chilliwack in rainbows wherever they can get away with it legally. As reported in the article, Price stated, “From our count thus far we have 11 crosswalks on the ground, with at least another five approved at schools throughout our district”. The article explained, “Some of the rainbows are painted on private residential property, four are on First Nations land, and one can be found at the Chilliwack School District office”.

In addition, rainbow murals are proudly displayed at local businesses and a rainbow bench and a crosswalk have been painted at an elementary school.

Price contends, “…we may have surpassed major urban centers with the sheer volume of crosswalks that we have seen installed in Chilliwack”.

Do we want Chilliwack to be known as a city with the most rainbow crosswalks? The LGBTQ activists want to co-opt one of the most conservative cities in BC to at least tolerate, if not accept, their ideology while they transform Chilliwack from its conservative roots into a ‘progressive’ community, which aligns with a cultural Marxist agenda that destroys the family.
In addition, a goal of the ‘family-friendly’ Gay Pride parades is to erode conservative values of faith, family, and freedom while normalizing the LGBTQ lifestyle.

A rainbow crosswalk is a political symbol that is not inclusive of the general public and represents a minority group who are intolerant and often hateful toward those who do not agree with their worldview. Rainbows painted on crosswalks, benches and murals as well as rainbow flags help to further their agenda.

The Pride flag creator, Gilbert Baker, profoundly declared its meaning, “That’s what flags are for. Flags are about proclaiming power… that visibility is key to our success and to our justice.” Rainbow crosswalks and flags represent militant activists who push their agenda with the rainbow symbol.

The left-biased Huffington Post reported, “Chilliwack, B.C. Becomes Unlikely Hub For Rainbow Crosswalks,” which is a dog-whistle broadcasted far and wide across our nation to the radical LGBTQ activists and their allies to inundate Chilliwack with financial and ‘moral’ support for their rainbow crosswalk agenda. If you think your city is immune from “becoming a city of rainbow crosswalks’ – you’d be wrong!

It is happening everywhere in Canada; their resources and willingness to act knows no bounds. In fact, this may be a clarion call to other cities to compete with Chilliwack for the dubious distinction of “Most Rainbow Crosswalks in a City”.

Is it prophetic that Chilliwack was once known as “Rainbow Country”? Are its long-time residents just progressives in disguise? More than likely they are the people who respect God’s covenant through the rainbow in Genesis 9:12-16. However, those beliefs are long forgotten by all the new socialist residents streaming into God’s country from parts west of Chilliwack.

It may be too late to prevent the LGBTQ from remaking Chilliwack into their vision of a welcoming and inclusive city with rainbow crosswalks and flags, which is symptomatic of the malaise we are experiencing as the LGBTQ and their allies steamroll residents with their agenda to transform Chilliwack into a new and improved version of itself! Do we have the energy and the will to stand up and speak our truths to preserve our faith, families and freedoms or are we mired in apathy?

I fear Canadians are all too complacent and apathetic as they slowly descend into the dependency stage of the commonly known “Tytler Cycle” of civilization. The stages of the rise and fall of civilizations are often ascribed to Scottish judge and University of Edinburgh historian Alexander Tytler (1747-1813). According to a quote attributed to Tytler, he states,

The average age of the world’s greatest civilizations from the beginning of history has been about 200 years. During those 200 years, these nations always progressed through the following sequence: From bondage to spiritual faith; From spiritual faith to great courage; From courage to liberty; From liberty to abundance; From abundance to selfishness; From selfishness to complacency; From complacency to apathy; From apathy to dependence; From dependence back into bondage.

With an aggressive campaign to make Chilliwack the city with the most rainbow crosswalks, I don’t have much optimism for understanding any time soon between the LQBTQ and Chilliwack conservative residents. However, perhaps the newly formed Mayor’s Task Force on “Inclusivity, Diversity and Accessibility” (IDA) offers a ray of hope of reconciliation and resolution among the diverse groups in Chilliwack.

It is way past the time for action. If not now, when will it be the right time? Take action! Comment online to newspaper articles; write a ‘letter to the editor’; organize strategic plans with other like-minded individuals; work with political parties that support your views (e.g., provincial conservative party, Wexit, etc.); write articles for conservative media; speak with your MLAs and City Councillors. Volunteer your time and donate money to preserve our conservative values and to stop the LGBTQ agenda that is slowly overtaking our communities. You can be sure they will never, ever, give up their agenda and we cannot afford to give in to the petty tyrants!

In the meantime, if the City Council ever decides to fly a rainbow flag in “Rainbow Country”, you can be assured that if the flag becomes tattered and torn, it will be replaced immediately to uphold the symbol of LGBTQ hegemony over Chilliwack residents and to affirm their mantra, “Diversity is our Strength!”