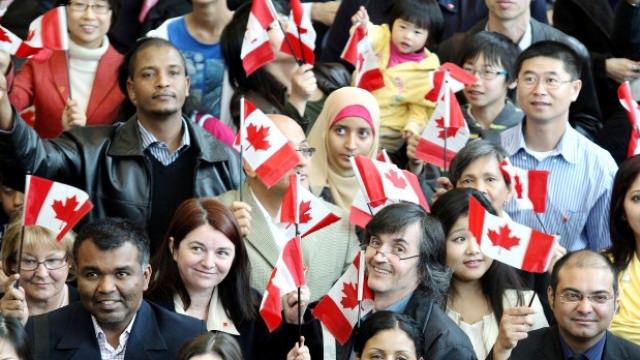 Editor’s Note: This is part of a lecture the author gave at UBC, October 9, invited by a group of students fed up with the brainwashing at Canadian universities.

Promoters of mass immigration, same ones celebrating increasing ethnic diversity across the West, claim the phrase “the Great Replacement” is part of a “white genocide conspiracy theory”. They also want to persuade security authorities that this phrase should be banned or made illegal because it “motivates alt-right killers the world over”.

The globalist-Marxist controlled internet is full of articles celebrating the replacement of whites. In the case of the United States, we regularly read that “the white share of the U.S. population has been dropping, from a little under 90% in 1950 to 60% in 2018”. And that it will “likely drop below 50% in another 25 years.”

White nationalists want America to be white again. But this will never happen. America is on its way to becoming predominantly nonwhite.

Stats Canada, which is supposed to be about statistical trends without ideological agendas, regularly inserts celebratory phrases about the impending replacement of white Canadians. After making projections about how mass immigration from non-European countries is leading to a dramatic reduction in the proportion of “Caucasians in race”, StatsCan happily informs us that

immigrants and their descendants, in addition to contributing to the social and economic development of the country, play a significant role in shaping and enriching the ethnic, cultural and linguistic composition of the Canadian population.

Second, it is clear that StatsCan happily uses the terms “Caucasian in race” and “non-whites in colour” when the subject is the replacement of whites, and the growing “enrichment” of Canada brought by “non-whites in colour” while condemning the use of these terms when it comes to making any positive claims about whites or any negative claims about non-whites. StatsCan, for example, prohibits any claim about how Canada was founded by “Caucasians in colour” on the grounds that different European ethnic groups cannot be identified as “white”.

In any case, to those who say The Great Replacement is a “white conspiracy theory”, check the following key replacement projections Stats Canada announced in its 2016 Census:

This is not all. We have powerful scientific research by the foremost demographer of our time demonstrating the impending replacement of whites by foreign immigrants. Members of the media and the lazy academics in charge of our universities are unaware that a highly regarded demographer, Professor David Coleman of Oxford University, was the first one to offer a scientifically based projection of the Great Replacement. Coleman is British by ethnicity, from England, a nation which produced the first formal census, the Doomsday Book of 1086, and which now has a reputation for the best studies in the field of demography.

Coleman is the author of 90+ papers and 8 books. He said in 2010 that white British would make up less than half the population in “little more” than 50 years. This decline will be caused by record-breaking levels of immigration and the migration of thousands of British nationals abroad over the coming decades. In what is now a classic paper cited close to 600 times, “Immigration and Ethnic Change in Low‐Fertility Countries: A Third Demographic Transition” (2006), he wrote:

that the ancestry of national populations in Europe and the US is being radically and permanently altered by high levels of immigration…in combination with persistent sub-replacement fertility and accelerated levels of emigration of the domestic population.

In another 2010 article, “Projections of the Ethnic Minority Populations of the United Kingdom 2006–2056”, he concluded that

The Great Replacement is real. It is the most radical and permanent alteration in the history of Western Civilization. It the greatest crime against humanity orchestrated by globalist elites who hate whites and want to see them marginalized and demonized without a cultural identity, without homelands, and without dignity.