The Great Replacement In 30 Seconds 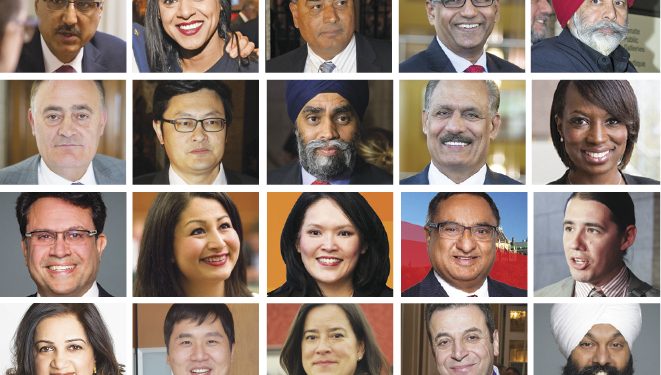 [Editor’s Note: Sometime after this article was written, Elections Canada — for some reason or another — replaced the video which this article described, with a different video using the same link.]

In a 30 second commercial that has been filling TV screens for a week now, Elections Canada encourages Canadians to register and vote on October 21st because, in their words, “It’s Our Vote“. But if you look at the faces of the half dozen people featured in this ad, you might get the impression that it is not “our” vote—the vote of “old stock” Canadians—but “their” vote, the vote of the million migrants who pass through our gates or walk across our borders each and every year courtesy of an immigration and refugee policy constructed in defiance of public opinion. As far as I can determine, at least four of the actors in this cute story are “people of colour” (POP), and three of them New Canadians, including the one or two year old product of a biracial marriage.

Even the less discerning of us will appreciate that Elections Canada’s sales pitch is rife with stark symbolism. If it needed a title, it could be called be “Moving Day”, as it features someone whom I would dub “Mr. Token”, a young white male with golden locks cheerfully helping POP carry furniture into their new abode. Significantly, several frames depict the New Canadians among them at a Citizenship ceremony, with their right hand up and poised to swear allegiance. Particularly poignant is the image of the baby boy in his father’s arms clutching a small maple leaf flag.

All in all, it is one big happy and harmonious display of Canada-in-the-making. Aside from their racial composition, one cannot fail to notice that all of the people in this ad are young. It doesn’t take a genius to see what demographic this commercial is directed at, and which political parties or politicians they are most likely to vote for. Let me give you a hint. It isn’t Maxime Bernier or the Peoples Party of Canada. Of course, I wouldn’t dream of questioning the neutrality of a taxpayer funded instrument of information and integrity like Elections Canada. I am sure that Elections Canada is above reproach, like the CBC.

Diversity cultists would no doubt claim that the racial makeup of these actors merely represents the reality of Canada today. Not quite. Visible minorities make up roughly half of Metro Vancouver and Toronto—not two-thirds, as this ad would suggest. Moreover, in no way does this ad reflect the racial profile of the nation at large, where visible minorities make up 22% of the population. It may come as a shock to the social engineers in Ottawa, Toronto and Vancouver, but the universe extends far beyond the urban boundaries of these bastions of enlightenment, tolerance and diversity. As a matter of fact, I would suggest that a good third of Canadians are grounded in reality, something that most progressive big city dwellers can barely relate to. If these morally superior beings were interested in seeing what reality looks like, the protocol is clear. Turn off the CBC. Pack your bags. Get in your car. And take a trip to small town hinterland communities where ordinary people tend to dwell. But be prepared to be triggered by common sense.

It must be understood that in commissioning commercials like this, it was never the intention of the immigration lobby and its executive arm in parliament to depict Canada as it actually is, but rather, to condition viewers to accept the Canada that they hope will unfold. The message is, “This is a done deal. This is what our cities and towns will soon look like, whether you like it or not. Resistance is futile.” In other words, these kind of TV ads are not descriptive but prescriptive. And we have had a ton of them in recent years, haven’t we?

Those who care to reflect upon the rapid demographic change that this Elections Canada message illustrates will soon realize that it is not precisely about “Moving Day”, but rather, Moving “in” Day. But if someone is moving “in”, then the question becomes, “Who is moving out?” From coast to coast, the answer is clear: Old stock Canadians, both young and old. That is why formerly “sleepy” towns and quiet havens from Camrose to Charlottetown are experiencing a population boom.

The irony is, many of these white flight (or white plight? ) urban refugees are fleeing from the consequences of policies imposed by the open borders parties they voted for. Maybe we could call it “The Californian liberal effect.”. Displacement looks good on them, doesn’t it? Do you think that eventually these people will connect the dots between urban decay, unaffordable housing, and traffic congestion on the one hand and the policy of mass immigration on the other? Can we fix stupid?