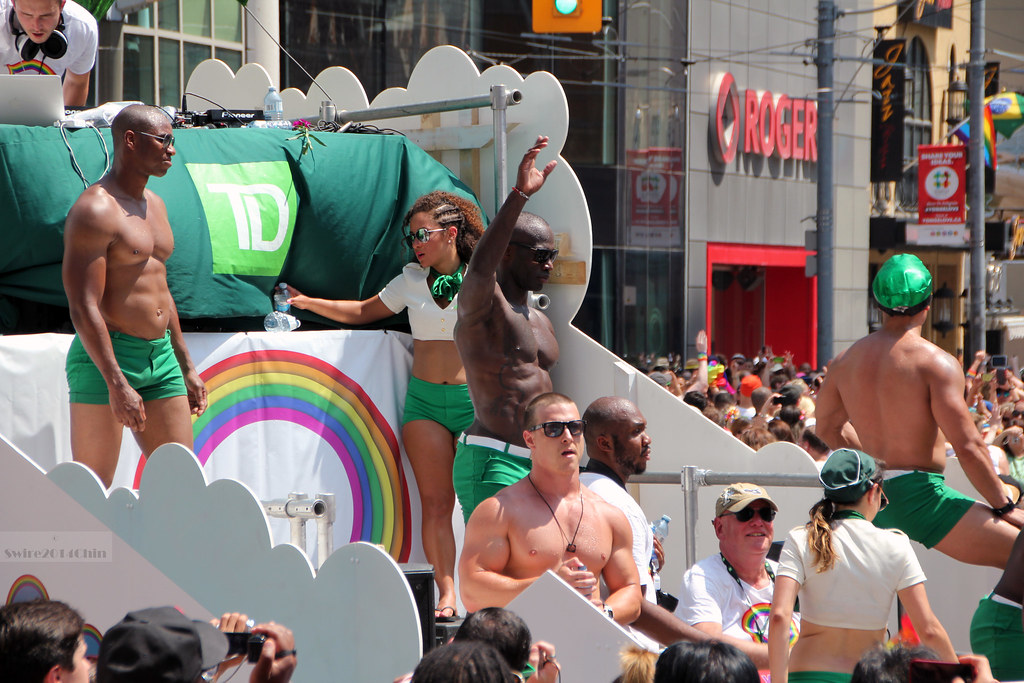 It has been my observation that the last couple of years have seen a major increase in the amount of multiracial propaganda that is being forced on viewers. It seems that the old conservative notion in the previous century that television was bad for us wasn’t far off the mark. However, a small number of companies here in Canada were ahead of the game in promoting the destruction of the Euro-Canadian ethnic identity. One of these companies is the Toronto Dominion Bank, commonly known for their green company colour and their business name “TD”.

This article is not meant to dive into my beliefs on central banking and fiat currency – I’m sure I share the same beliefs as most of you in that area. Instead, I am here to focus mainly on the media imagery that TD has associated itself with over the past several years. As one of the biggest and most influential corporations in Canada, the image they project of their customers and the fellow Canadians they interact with is important to note, regardless of whether or not one is a customer or investor of theirs, because major banks and other large corporations have the ability to influence a new reality.

I have never been an overly active TV watcher – mainly I tune in for baseball and hockey. I first noticed the bias in Toronto Dominion Bank’s commercials about ten years ago, when TD began this advert campaign featuring these two withering old white men on a sidewalk bench. The two old white men would at the beginning of the commercial discuss the way things were done in the old days, inevitably seeing in the second half of the commercial how supposedly wrong the ‘old ways’ were. The characters who would show the audience how good the ‘new ways’ are were usually Asians.

Most of these adverts are not uploaded to the Internet, and they are not even on TD’s YouTube channel, as far as I could see. However, the most obnoxious of the series that I could remember is available for us to see again:

But the reader might be wondering at this point: why would a major Canadian bank make this kind of play of racial division, putting Asian Canadians in the smart set and making Euro-Canadians the butt of the commercial? Don’t they know that Euro-Canadians are still the majority of the population?

Undoubtedly, TD knows this fact. But as a major corporation, they invest in things like demographic projections, in order for them to tailor their company for the business of tomorrow. The company that is tailored for only today is tomorrow’s old hat. TD clearly has been making a play for the business of the “New Canadians”: the active 24/7, the Asian-affiliated, the hyper-urbanite. We thus might expect in the next decade for TD to close its branches in small-town, old-stock Canada and leave those markets to be filled by community credit unions.

Who Are The Real Fraudsters?

Although TD’s ‘two old white men’ commercial series has been a memorable annoyance for me, it is not the reason why I was prompted to write this article. It has been a more recent advert that has gotten me irritated enough that I felt it was time to call TD out. Some caviar?

So in this commercial, we see a sleazy white couple dining out at some Caribbean or Mediterranean restaurant al fresca. It is then implied that these two were using stolen credit card information to pay for their luxurious meal, making victims out of the smart and attractive East Asian woman (and her South Asian husband).

The demographic choice for the characters in this commercial is even more insulting than the ‘two old white men’ series. Thousands of Euro-Canada’s seniors have had their money stolen them – through email phishing, telephone scams, and even by the caregivers in senior manors. The majority of these scams come from Asia or Nigeria. An accurate version of this commercial might feature a EuroCanadian senior talking on the phone, his wife cooking in the background, with the other half of the screen featuring a Nigerian or Bangladeshi in a telephone scam operation centre. But could you imagine the outcries of “racism” if TD actually portrayed fact instead of fiction?

According to census data, less than 5% of Canadian citizens (we are not adding to that number all the fake refugees now living here) count as “Black”. If one were to assume that Afro-Canadian financial demographics are microcosmic of their Afro-American counterparts, one would conclude that Afro-Canadians would be a irrelevant customer base and a statistically insignificant source of revenue for the Toronto Dominion Bank.

But apparently instead, TD (or whoever TD outsources their advert production to) thinks that the company not only needs to portray blacks on a level way out of proportion to their real value, but that the company also needs to get in on the promotion of black males as sexually dominant over non-black females!

Now, TD does release a number of commercials that also featuring solely Euro-Canadian couples and families. But it appears that also their media managers are going to work to enjoy the fetishation of multiracial couples, and especially black male sexual dominance.

RAP = Canadian Culture, According to TD

Have you heard of Kardinal Offishall, before today? Neither have I. But we’ve heard of him now – thanks to TD:

He was apparently a performer at some event sponsored by TD called the Union Block Party.

This advert does not feature any TD products or financial advice – it is merely Kardinal talking about how he expresses his values through his so-called music. He does insinuate at how urban black youth turn to violence because they lack proper outlets. He is right about that, but there are more productive things he could be promoting to these kids besides the hip-hop culture, steeped as it is in association with tacky luxury accessories (a.k.a. “bling-bling”), drug use, prostitution, and general crime.

TD certainly could find a better music ambassador who could target a wealthier audience with better morals – Alberta’s own Paul Brandt comes to mind.

But we return again to the earlier projection in this article: that TD is bearish on old, white, rural Canada, and all that it entails. It thus is seeking to promote its business in the “New Canada”, even if that means throwing out all the old morals and sensibilities of “Old Canada”. Then again, money managers are not typically known for their sense of conscience or morality.

Who Is Toronto Dominion Bank?

A quick look at the TD corporate leadership webpage reveals much to us, when we see who the CEO, CFO, and CRO are:

As for TD’s board members? These characters are shadier; no biographies are listed on their website. At least one of these directors (Irene Miller) is a former Rothschild employee. The chairman of the board of directors is a man by the name of Brian M. Levitt. I don’t think I need to explain in great detail what Mr Levitt is… other than that it rhymes with “stew”.

Summani is the author of ‘Minister of Civilisation & The Second Enlightenment’.