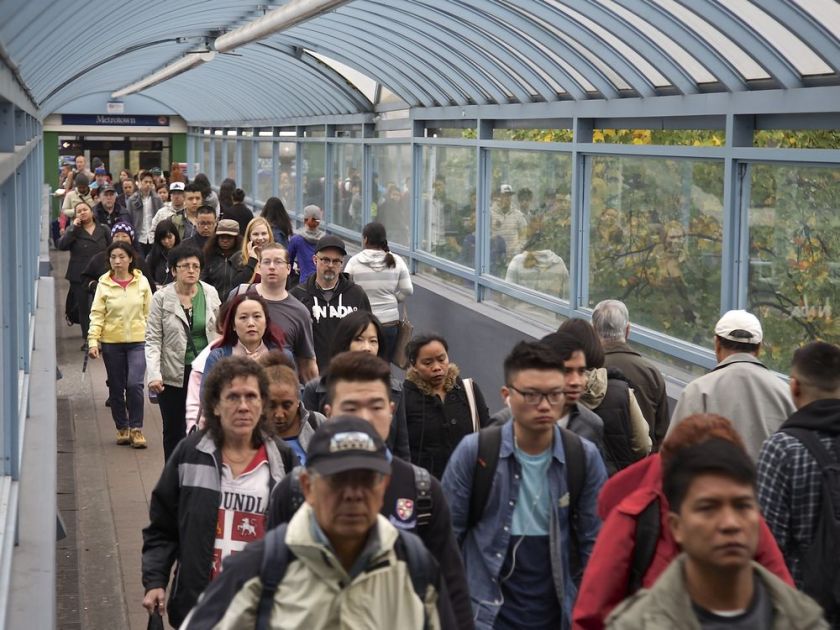 In Canada’s tolerant and inclusive society you are not allowed to publish scholarly arguments criticizing the mandated notion that diversity “enriches us all”. I thought that a slight light of free discussion would be allowed when the Vancouver Sun and the Province published an Op-Ed two days ago, September 6, with the title “Ethnic diversity harms a country’s social trust, economic well-being, argues professor”.

But only a day passed before the article was deleted from both newspaper’s website and replaced with apology. Vancouver Sun editor-in-chief Harold Munro said that this article did not meet the paper’s journalistic standards because it went against the Sun’s “commitment to promote and celebrate diversity, tolerance and inclusion” in Canada.

This suppressed article, written by Mark Hecht, an instructor at Mount Royal University, referenced five major research papers in support of its argument. The article was saved and archived, so we can determine for ourselves its quality without blindly accepting the lies of the establishment. The basic claim Hecht makes is that:

Many western nations assumed that increasing ethnic and cultural diversity through immigration would be beneficial. The dogma of diversity, tolerance and inclusion assumed that all members of the society wanted to be included as equal citizens. Yet, instead of diversity being a blessing, many found that they’ve ended up with a lot of arrogant people living in their countries with no intention of letting go of their previous cultures, animosities, preferences, and pretensions.

The retraction by Munro had nothing to do with lack of  “journalistic standards” by Hecht. This cowardly suppression of free speech came after a hysterical backlash initiated by ethnic hustlers, by multiple reporters from Postmedia (which owns both the Sun and Province), and by pseudo-scholars from Mark Hecht’s university.

Not a single one of these individuals provided a scholarly argument against Hecht’s article. Instead they all announced — with willful intent to deceive Canadians — that the article did not cite any sources except an article from Gatestone Institute. The following scholarly studies were linked or mentioned in Hecht’s article:

This is a lot considering that this is a short article intended for a popular newspaper. How could so many journalists claim (without any sense of shame, professionalism, and morals) that this article was a “bizarre opinion piece” “without journalistic merits”?

The Deceivers Suppressing Debate About Diversity

The greatest condemnations came from ethnic hustlers like Kulpreet Singh, who demanded journalists across Canada to “make a public commitment to never publishing racist propaganda”. Criticism of mass immigration should never be allowed in Canada. Meanwhile this guy is obsessed with promoting the ethnic interests of Sikhs.

Avnish Nanda, another ethnic hustler who wasted no time exploiting the win by Euro-Canadian Bianca Andreescu to rationalize the opening of Canada’s borders to endless throngs of foreign immigrants from Asia, also demanded that journalists and academics should only be allowed to voice views that support the complete diversification of Canada and the Western world. Nanda, originally from India, the most racist country in the world, bragged that he has the moral background to demand

a greater responsibility on media outlets and journalists in this particular climate to address these issues, to not give voice to this kind of jingoistic, xenophobic views particularly when they’re published online.

Stephanie Ip “started weeping” when she read Hecht’s findings about how diversity erodes social trust. Her only argument seems to be that her weeping was sufficient evidence that the article was “racist” and factually wrong.

But while we may understand that these individuals are pursuing their ethnic interests, giving inadvertent credence to Hecht’s argument about lack of social trust, we should be outraged by the purely accusatory, anti-intellectual condemnations from multiple reporters from Postmedia (which owns both the Sun and Province) as well as professors from Mark Hecht’s university. This university’s dean of the faculty of science, Jonathan Withey, came up with the really contradictory statement that since Mount Royal is “a place for debate, for freedom of expression and for the respectful exchange of ideas,” but Hecht’s ideas are not “the position of Mount Royal University as a whole,” since this university is “committed to diversity,” it follows that he will not defend Hecht’s right to be respected in the expression of his research-based ideas!
A similarly bizarre logic was evident in journalist Cassidy Olivier’s statement that since “the Vancouver Sun/Province newsroom is one of inclusion & diversity of opinion”, and since Hecht’s article says that diversity decreases social trust, it follows that his diverse opinion should not be tolerated. But the top prize for deceptiveness, lying, and hatefulness goes to Evan Balgord, the executive director of the Canadian Anti-Hate Network. Without caring to offer a single falsifying fact, this charlatan, who is known for his Gestapo-like tactics in the suppression of dissident views, said that Hecht’s article consisted of nothing but “neo-Nazi talking points…factually incorrect … this is just basically white supremacist screed.”

There you have it, ladies and gentlemen. This is the state of debate in Canada over the “tolerant and inclusive” ideology of diversity. Yet there is now overwhelming evidence showing that diversity decreases social trust and cohesiveness. The most extensive survey on the effects of diversity on trust and civic participation is Robert Putnam’s 2007 “E Pluribus Unum: Diversity and Community in the 21st Century”. Based on detailed interviews of nearly 30,000 people across America, this study showed that the greater the diversity in a community, the less people trusted each other, the less they gave to charity and worked on projects to improve the community, and the less they voted. In those communities supposedly enriched by diversity, neighbors trusted one another about half as much as they did in those communities that remained majority White.

After Putnam’s study, many other empirically oriented studies were published. (Keep in mind that the academics doing these studies need to be very careful with how they word their findings, and avoid concluding that diversity is not working, otherwise they risk losing their research funding and jobs. Keep in mind, too, that the diversification of white-created nations is still a relatively new experiment; Europe only intensified mass immigration after 2000-2001, therefore, these studies are looking at diversification in the early stages of community breakdown and rising ethnic hostilities).

There are many additional studies showing that greater diversity increases mistrust and reduces social cohesion. It should not be surprising that some studies challenge Putnam’s hypothesis. Yet, as I argued in “Diversity Is Destroying the Cohesion and Social Capital of Western Nations,” none of these studies have demonstrated that diversity increases social cohesion. At most, they have produced some evidence that ethnic diversity “does not, with any certainty, erode social capital.” This is a rather lame conclusion considering the endless paeans to multiculturalism and the masses of resources dedicated to diversification.

Don’t be afraid to speak out! The diversity establishment is intellectually and empirically hollow. Their only strength is that they constitute a conformist establishment. But the evidence is on our side. We are on the side of reason, scholarship, truthfulness, decency, and loyalty to the nation of Canada.