Jagmeet Singh Wants You To Know That You “Belong” 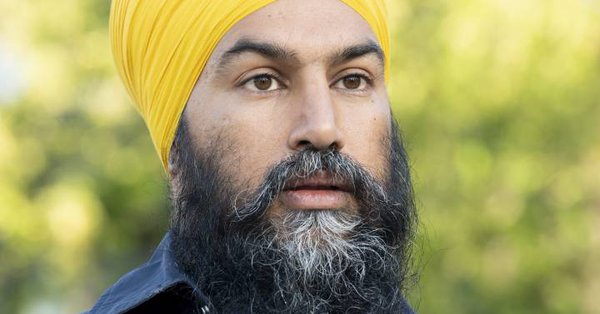 As you have undoubtedly noticed, Jagmeet Singh milked the infamous Trudeau “brown face” photo for all that it was worth. In various news clips, Singh was able to recount his “moving” story about how he was mocked for his religion when growing up, and how he was afraid that the Prime Minister’s clowning would “hurt” visible minority children. His takeaway message to those children was that they are “loved” and “valued”, adding that (drum rolls)

I want folks to know that they belong.

Is this the same guy who said that attaching a blank sheet of paper on a door with a message that stated that “It’s OK to be white” was a hateful expression of intolerance? Was Mr. Singh saying that it is not OK to be white? If so, then I guess I should cover my face with the same “racist” make-up Justin wore when he was Aladdin. But then if I did that I would be a racist, wouldn’t I? But wait a minute, I am a racist already because I’m white, so what am I supposed to do? Oh, I know. I’ll commit suicide, just as the people of Sweden and Western Europe are collectively doing right now.

Perhaps Mr. Singh should amend his comment to say that “I want non-white folks to know that they belong”. Or “I want white folks who challenge immigration policy and the imposition of Official Multiculturalism to know that they don’t belong in a national TV debate.” Or in Canada, for that matter.

I wonder if Mr. Singh would ever be “moved” to tell white “folks” in Vancouver that they belong? Especially the ones who have been priced out of the housing and rental markets by massive immigration and laundered Chinese money. If he did, he would most likely offer up the standard bromide. “The Great Replacement is just a conspiracy theory, and your claim that you no longer recognize the city you grew up in is an optical illusion, an hallucination. Don’t believe your own eyes.”

Being the compassionate individual that he is, Singh would no doubt characterize the stubborn insistence that Vancouver has been rapidly transformed into a basically Asian city as the manifestation of a mental disorder, and that those disaffected and marginalized people who have succumbed to it should be treated, not punished. Like any good trauma counsellor, Singh would soothe their worries with the assurance that “You aren’t being replaced because you aren’t going anywhere.” Another standard bromide, or shall we say, sedative. But hey, if that doesn’t succeed in pulling the wool over their eyes then there is always the fall-back position. “Celebrate the differences”. In other words, celebrate your displacement.

I look forward to the day when Mr. Singh—or Mr. Trudeau and Ms. May for that matter—defines “hateful”. When he (or they) call Mr. Bernier’s views on immigration “hateful”, I assume that they mean “full of hate”. But nothing is said about what should be most relevant, the factual CONTENT of Mr. Bernier’s “hateful” statements. We know that assertions can be “fact-checked”, but I for one am not aware of any meter that measures intangibles like the emotion which Singh, Trudeau and May call “hate”. All I know is that they regard any criticism of the all-party hyper immigration agenda as “hateful”. And they are quick to conflate “anti-immigration” with “anti-immigrant”. Hating a policy is equivalent to hating those who benefit from it, right? Jesus hated sin so ipso facto, Jesus hated sinners. I am sure that if a CBC journalist was covering the Crucifixion, she would make that leap. “Jesus was a hater who should have been denied a platform to spread his hateful and divisive rhetoric. This is Adrienne Arsenault reporting from Jerusalem.”

Now I must confess that I am “hateful”.

For example I hate canned tuna fish—for two reasons. One is that I hate the taste and other is that I suspect that it is tainted with mercury. Oh, and did I mention that a tuna-fish salesman ran away with my wife?

Consequently, whenever I am asked about the safety of eating canned tuna fish, my allegations concerning its mercury content are delivered with passion and rage. I am quite obviously a “hater”. So given this information, if I was the leader of a Canadian political party, would Mr. Singh and Ms. May say that I should not be given a platform for my “hateful” views about canned tuna fish? I almost think they would. Why? Because as we have been recently reminded, it is all about “feelings”. Hurtful remarks. Hurtful displays. People being hurt by words. Hurtful words hurting people’s self-esteem, causing them to hurt themselves, in many cases. Instead of examining my claim that canned tuna fish is tainted with mercury, they would focus on my emotional state. Besides, there is no telling how many young tuna fish consumers of colour might be damaged by my remarks. Absurd? Not in Canada! Not in 2019!

Which makes me ask, instead of holding a national TV debate, instead of selecting a political party or party leader to run the country, why not just abolish parliamentary democracy and invite Dr. Phil to lead the nation?

He would be called The Facilitator, and the House of Commons would be the venue for televised group therapy sessions. Instead of having a Finance Minister present the budget in the House, a circle of NDP, Liberal and Green Party politicians would sit down and talk about how they “feel” about the numbers—and each other. Dr. Phil’s job would be to probe into their family histories and uncover the underlying psychological reasons for their visceral dislike of fiscal responsibility. He would tell them that they must let go of their anger. While it would be a frank, no-holds-barred exchange, particular care and attention would go to ensuring that trans people of colour or disabled immigrant female viewers would not lose their self-esteem in the process.

In other words, Dr. Phil would walk the tight rope that Jagmeet Singh claims to walk with the skill of a circus performer. In the opening paragraph of his letter of September 17, 2019 to the Commissioner of the Leaders’ Debate , David Johnston, Singh asserts that Mr. Bernier should not be given a platform to “promote an ideology of hate that spreads prejudice and disinformation“. But in his concluding paragraph, that he maintains that “Canadians deserve to hear an open political debate between different points of view.”

Obviously Mr. Singh has a severe case of cognitive dissonance, which among politicians, is an occupational hazard. Mr. Singh is blatantly capable of holding two conflicting ideas in his colorfully swathed noggin at the same time. Pity that Dr. Phil is not on hand to sort it out for him. I would recommend treatment by a mental health professional, but I rather think that science has not yet found a treatment or a pill for Mr. Singh’s “ideology of hate”. Perhaps it is genetic. Perhaps Leftists are just born to hate Western Civilization and the fact that Canada was built by two founding peoples of European origin guided by Christian beliefs. Perhaps they hate to admit that no governing party ever had a mandate to fundamentally change the ethnic profile of the nation or jack immigration levels up to the stratosphere. Who knows? If only I could see into people’s minds and hearts like Singh, Trudeau and Elizabeth May can.

I am inclined to argue that Mr. Singh be excluded from the national leaders debate for the same reason that he gave for excluding Bernier in the penultimate sentence of his letter to David Johnson. That is, other leaders should not have to waste precious time “defending values that are already at the core of what Canadians believe”. Agreed. I don’t think Maxime Bernier should have to spend his time defending free speech.