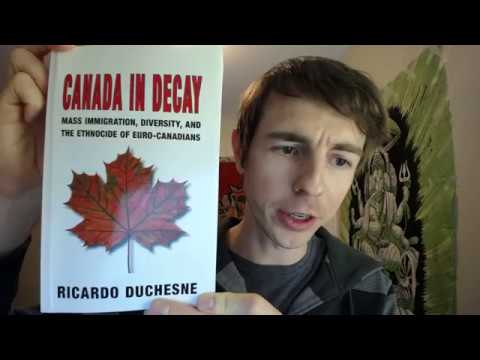 My book, Canada in Decay: Mass Immigration, Diversity, and the Ethnocide of Euro-Canadians (2017), continues to be a best seller at Amazon.ca. It is not consistently ranked #1 in various subjects, as I observed last year in “Canada in Decay: One Year Later“, but still selling very well.

The media and the corrupt academic establishment continues to ignore the book. I have emailed about a dozen academics who are “experts” on Canadian multiculturalism inviting them to CEC to comment on my book, or simply asking for their opinion. They have ignored my emails. This blind refusal to consider alternative ways of thinking should not surprise us. As Lindsay Shepherd shows in the video below, universities are a “bureaucratic scam” of overpaid “equity and diversity officers,” dedicated to ripping off white students in the same breath as they attack them as racist while celebrating foreign students.

It is disgusting what these overpaid academic traitors are doing to millions of white students!

I have invited not only “experts” but numerous journalists to find ways to question or refute the following key claims in Canada in Decay, without a single volunteer:

Let me repeat here what I said in closing a year ago: since Canada in Decay is the only fully developed argument against an establishment determined to marginalize Euro-Canadians, I urge you to purchase this book as a metapolitical act. (You may also want to buy the new edition). The longer the book stays as a best seller, the more it will be purchased, the more its ideas will spread, and the stronger we will become. We must totally undermine the deceitful ideological foundations of immigrant multiculturalism.

Once you read the book, I also encourage you to write a short review at Amazon.ca, if you agree with the arguments. This is very important. It is a key way to counter the anti-White establishment and its efforts to ignore and malign this book. Academics and fake journalists are furious this book is a best seller, let’s keep them angry for a long time!