All Aboard With Transgender Ideology 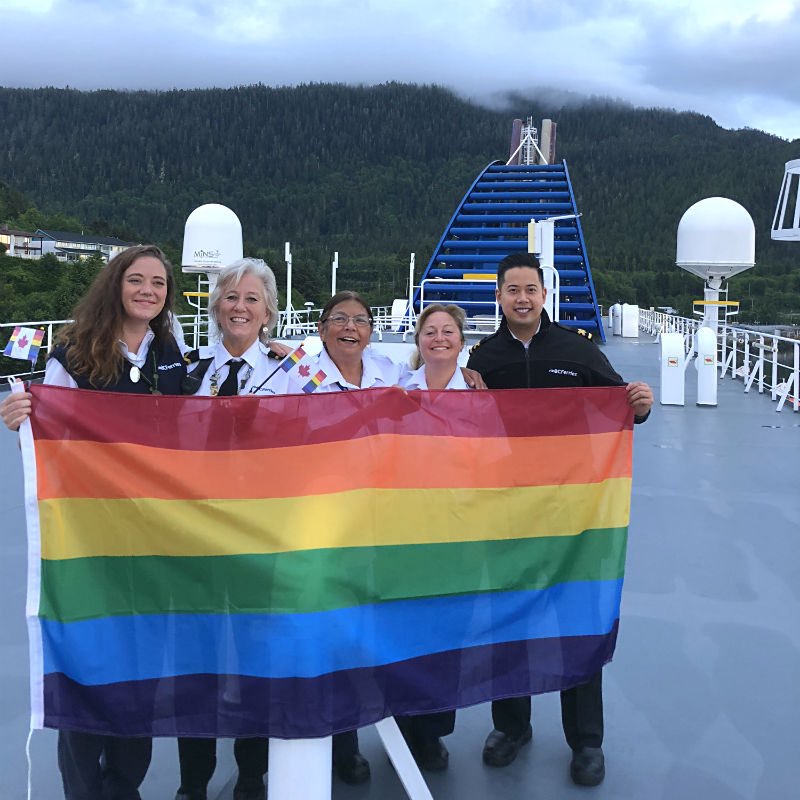 Last Thursday night I attended a local meeting of a growing grass roots made-in-Vancouver Island group of some 200 social conservatives. The meeting was intense, informative and geared for action. The discussion moved from the broader picture—the demolition of our Christian heritage and culture and the war on free speech—to the immediate threat posed by the aggressively imperialistic transgender lobby, insatiable in its appetite for more public spaces to occupy.

The conclusion is inescapable. Children are being sexualized with few ‘safe’ spaces to find refuge. One powerful lobby group has claimed the public space. Their message: “ Move over or go home —and shut up. The media and the state is on our side and the BC Human Rights Tribunal stands behind us.”

Hmm. This sounds pretty alarmist. Are things really that bad? Are the barbarians really at the gates, or inside them? The answer came soon.

When I took the returning ferry home, I noticed that the ship was flying the rainbow Pride flag, 17 days after Pride Day! This is on a taxpayer subsidised ship! Which made me think that it would be appropriate if the BC Ferries Corp was renamed the” BC Fairies Corp”. Should that change transpire, I may one day feel compelled to do something I would never have dreamed of doing. I may have to run to catch a fairy. But I will be damned if I’m ever made to ride one! I’d rather swim.

If the BC Ferries Corp was indeed to become the BC Fairies Corp maybe the CEO should be replaced in favour of a Rear Admiral, eg. Svend Robinson. After all, every vessel in the fleet can unload at either end, although docking can be problematic at times. Since most ships are referred to as “she”, as in “there she blows”, it is certain that this sexist practice will be soon come to an end when our progressive provincial NDP-Green government realizes that the fate of the nation depends on its immediate termination. Every ship must eventually be referred to using a non-binary pronoun, or maybe a traditional pronoun with a gay male connotation, as in “there he blows”.

Perhaps BC Fairies vessels could be gender fluid. They could leave one terminal as a ‘she’, and arrive at the destination terminal as a ‘he’, depending on the fluctuating mood of the non-binary captain who was hired to meet the new quota targets. “The Queen of New Westminster” could leave the Tsawassen terminal at 11 am and be received 90 minutes later in Swartz Bay as “The King of New Westminster”. Alternatively, the vessel could simply be called the “Drag Queen of New Westminster”, a venue for reading Queer Folk Tales to children with or without parental approval or supervision. Tsawassen-to-Swartz Bay and back could then become a world class trans-portation route.

If the vessel should collide with another, take on water and begin to sink, the “women and children first” protocol would have to be changed to a “gender dysphoric children and gender fluid mothers first” rule. Biological male passengers eager to claim a seat on a lifeboat would not need to offer proof that they are actually women—they need only declare that they presently ‘identify’ as a woman. Any ship officer or crew who would challenge such an assertion would be subject to immediate dismissal and a BC Human Rights complaint adjudicated by political hacks. To hammer that point home, vessels would be re-christened to honour the contributions of trans activists who have contributed so much to our progressive and tolerant society, especially in the area of free speech. How does “MTV Morgane Oger” sound? It would be designated as the Mother Ship of the fleet, but It wouldn’t need a wide berth owing to the fact that it can’t give birth. Seriously, as one speaker at the meeting said, “Things are moving so fast that if we don’t soon get off our butts, organize and ACT now, it will be game over….for one thing, we need the ability to call upon a quick response group to counteract Antifa and LGBT bully groups who show up to shout us down…..of those in our congregations who feel as strongly as we do, many feel too intimidated to stand up to them……as a result, our children are being abducted by this evil cult, made ever more powerful by the ardent support it receives from local council, the provincial government, and the local media….” (words to that effect).

The issue here is not just about free speech, but the flagrant transgression of the formerly respected boundary between ideology and state. The former is the privilege of the elected custodians of the state, and the latter is, or should be, a neutral instrument employed impartially for the benefit of all taxpayers regardless of their political orientation. In an authentically democratic nation, civil servants, public sector employees and the institutions they work in should be politically neutral. In Canada, neither the RCMP, nor a City Hall, nor a public school, nor a public library, nor a publicly subsidized ferry—to cite a few examples—should dare to display a political message that promotes a given ideology no matter how many citizens there may be who might ascribe to it. That’s basic Canadian Civics 101.

But in the emerging soft totalitarian society, the Party that controls the state, feels little compunction in using public resources to propagate a partisan line and comandeering state property for use as a platform for that same purpose. In this case, they frame their shameless display of rainbow flags and posters as an acknowledgement and celebration of the ‘diversity’ that exists in our society. But they celebrate cultural or sexual ‘diversity’ to the utter neglect of the ideological diversity that is as much a reality in the community as anything else. The Left is keen on the diversity of people, but not on the diversity of ideas. They are all for “inclusion”, but their inclusion is not inclusive of ideas and views they detest.

They assume that all taxpayers are on the same page. They pretend that Christians and social conservatives do not exist, or if they do, are too marginal and too out of sync with the times to warrant consideration. In their eyes, conservative thought or expression is an atavism that needs to be suppressed, silenced and ignored, until its aged proponents pass into the dustbin of history. The implication is clear. Bigots pay taxes, but they do not deserve representation—or an audience for that matter. Consequently, our entreaties and LTEs are ignored.

Soon, it seems, the rainbow flag will be a permanent feature of every flag pole every day of every week in the calendar. The most worrisome part of this story is, as a few speakers pointed out, the active dissidents are over 60, and the pastors are too timid and ostrich-like to lead them or rally younger parishioners to the cause. They believe that the issue is too “divisive”. They want their pews and chairs to be filled with happy campers full of joy, peace and love for all. The want to be nice people, not angry or righteous warriors. They assume that nice people will be left alone to preach the gospel and live unscathed by tightening curbs on free speech and the widening definition of punishable “hate speech”. They choose to ignore the fact that if the bullies continue to have their way, ten years hence their churches may be on life support. Or worse. It will be a bitter lesson.

The window is rapidly closing and having feasted on blood, the sharks are circling ever closer. We need the younger generation to step up and pick up the torch. We all need to stand up and say “no more”.

When we as a culture are forced to play along with something that we know is not true— and more than that, something which is often simply ridiculous, it degrades and demoralizes us all.

The totalitarian instincts of the transgender crowd are rooted in the fact that many of them know that they cannot actually persuade much of the public of their premises, and so instead the public must be forced to accept them or pay the price. That is a very dangerous road, and one that is in our power to avoid…This transgender mass delusion will end when enough refuse to play along.

The hard truth is that a lot of us must be prepared to lose our comforts, our assets, our livelihoods and our freedom. We must be prepared to go to jail for our beliefs. When one considers that the deprivations and terrors that Christians and dissidents in Africa and the Middle East have suffered for their faith, it is obvious that most of us have had it too good for too long. Our faith and convictions have atrophied and weakened in the matrix of affluence. We have not been tested and hardened by adversity. We worry about our pensions and the opinion of our peers, and we covet more and more things, as if their acquisition will fill the spiritual void that renders our lives meaningless. We are a pathetic lot, unworthy of the legacy that our grandparents or great grandparents and forebears left us. These were the much reviled pioneers and homesteaders who worked their guts out and laid down the foundation of this country. They didn’t have much, but they had faith, fidelity, endurance, patience and patriotism. And that was more than enough. Much more that money can buy. Much more than we have.