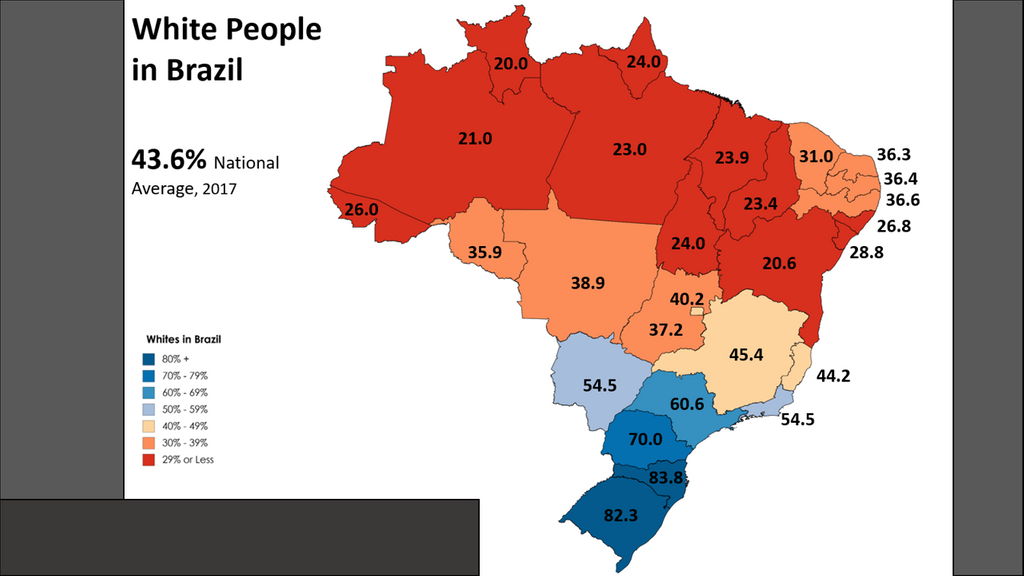 According to Chinese State media journalist, Ding Gang, Brazilians are lazy slackers incapable of  modernizing their country properly, whereas Chinese people are more intelligent, frugal, family oriented, and plainly superior than other races. “It may sound racist,” writes Gang, “to differentiate development based on culture. But after living in Brazil for a while, you will find out the answer.”

Brazilians are not willing to be as diligent and hard working as the Chinese. Neither do they value savings for the next generation, like the Chinese do. Yet they demand the same welfare and benefits as those in developed countries…Chinese people have huge potential for pursuing family and personal happiness…In terms of political culture, Chinese civilization may not enjoy the longest history of all ancient civilizations, but it has survived vicissitudes for thousands of years and still prospers—the epitome of Chinese people’s vitality and creation—as well as a reflection of the political culture in Chinese civilization.

Breitbart cites other articles by Chinese state media claiming that the downfall of the Soviet Union was due to its lack of a traditional culture as good as China’s, which successfully merged communism with its own magnificent Confucian ethics. The Chinese State media also says that Chinese are superior to the drug addicted, criminally oriented, and lazier Americans. No other people have the same capacity for hard work as the Chinese.

What drives the Chinese to work so hard? It is not only the pursuit of better pay, domestic economy but also their mentality and the workplace culture…Confucianism is still relevant. Even in Asia, Chinese are regarded more hardworking than people of other countries.

It is hard to question Chinese superiority compared to the enfeebled white males who love diversity. But leaving aside this emerging reality, let’s compare China to those regions of Brazil in which whites remain a healthy majority. The Brazilian states with the highest percentages of whites are the three located in the South of the country: Santa Catarina (84% White), Rio Grande do Sul (82.3%), Paraná (70%), and São Paulo (60,6%).

Is it a coincidence that the whitest states of Brazil exhibit the highest economic well-being? These states have the highest per capita incomes, the lowest illiteracy, the highest life expectancy, the lowest homicide rates and the lowest levels of corruption. The cities of these states enjoy a reputation of being “clean, safe and organized”.

If we add to the whitest states those regions in the Southeast with the highest absolute numbers of whites, namely, São Paulo, Minas Gerais, and Rio de Janeiro, we are basically talking about the heart of Brazil’s development, prosperity, and modernization.

Because they have been the best areas in Brazil, non-white migrants have been flooding in search of the jobs, welfare, and modern living gracefully offered by the founding white population. I inferred this without any evidence. My first search brought a study supporting this inference. According to The Encyclopedia of Global Human Migration:

Internal migration flows were heaviest in movements from the northeastern to the southeastern states. The usual explanation for this movement references poverty and the lack of job opportunities in the northeast combined with the concentration of industries in the southeast, mainly in the state of São Paulo.

How does China compared to Brazil’s whiter areas? The Gross Domestic Product per capita in China was recorded at 7329.09 US dollars in 2017. The GDP per capita of Brazil was estimated to be 11200.00 USD. The Southeast states of Brazil have higher per capita incomes. While we cannot underestimate China’s growing economic power and modernization, a proper comparison between these two nations in terms of their overall economic well being, not just GDP, shows a Brazil with a higher HDI ranking. The whitest regions of Brazil decisively outperform China. The homicide rate by race and by state clearly show that Brazilian whites are as peaceful as the Swiss.

Using the logic and arguments of China’s State media, we have to conclude that the White people of Brazil are superior to the inferior Han people of China. By the same token, however, we must recognize that White nations undergoing racial diversification will be increasingly divided into under-developing race mixed areas and still developing White areas. Claims by the Chinese about their superiority vis-à-vis Western nations undergoing diversification will inevitably sound truer and truer if we don’t stop our traitorous globalist elites.