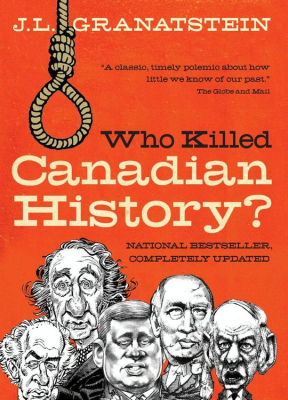 Jack Granatstein’s short book, Who Killed Canadian History?, was an immediate hit when it came out in 1998. This encouraged the author to release a “revised and expanded edition” in 2007. Everyone thought it was a daring challenge to the academic establishment criticizing the way multiculturalists had broken up Canada’s historical narrative into separate compartments according to ethnic, gender, and class identities. Conservative reviewers experienced warm, fuzzy feelings, as they read Granatstein’s call for a “uniting” national story about the liberalizing character of a nation committed to the equal rights of all humans and open to immigrants from every region of the world.

Granatstein takes great pains in this “impassioned cri de coeur” explaining to multiculturalists and feminists that he is not anti-immigrant, but “a child of immigrants” who believes “the glory of this nation is that its people, including even its Native people, came from somewhere else”. Leftists were unimpressed by his efforts to whitewash Canada’s racism and sexism, but the conservative establishment welcomed him with open arms and sinecures. This was an “essential book” about bringing Canadians together by teaching them their common heritage and experiences. In the words of Granatstein, history is the “collective memory of humanity”, and Canada’s history is the collective memory of past Canadians and new Canadians, Somalis, Haitians, Muslims, and Chinese. It is important to teach immigrants that Canada is their common history “because it helps [them] know themselves […] tells them who they were and who they are.” “It provides newcomers with some understanding of the society to which they have chosen to live”.

This simple-minded book is suffused with similar bromides, which are effective, nevertheless, in puffing up the righteous chests of conservatives desperately seeking acceptance while questioning Canada’s multicultic state. So caught up is Granatstein with fatuous phrases about “our history, our belief that we have done great things together in the past”, he can’t see how absurd it is to identify the “glory” of Canada with the observation that everyone “came from somewhere else” – which can be said about every nation in the world.

The central question of this book is “what is uniquely Canadian?” “What is Canadian identity?” The answer he offers shows what happens when one takes pretentiously lofty thoughts such as, “we are a nation of immigrants committed to equal rights”, as mottoes for the understanding of Canada’s history. The way to nurture this common identity, says Granatstein, is to make all immigrants, all cultures, and all religions, feel as much a part of Canada’s history as the British and Quebecois. We can then feel that it is “our history”, “Protestants or Muslims, ethnics or Anglos”. Since Canada is inherently committed to equality under the law against racial discrimination, Muslims are no less important to the making of Confederation than Protestants. We can make them feel attached to the history of the Loyalists by teaching this history as “our” common history.

This argument was hailed “a literary hand grenade”. It tells you how silly the Canadian mind has become. Immigrants are not interested in the history of the white pioneers and settlers (not immigrants) who founded this nation. It is not their history. They don’t identify with the commitment of the “Fathers of Confederation” to the collective well being of Canada as an ethno-state in which the English and the French saw themselves as two distinct national races coexisting within a federation. Granatstein’s effort to view Canada as an aggregation of immigrants in possession of liberal rights that supposedly belong to all human beings, and, therefore, to continuous caravans of newcomers, is part of a cultural Marxist narrative that the founding peoples would have not recognized as their common experience.

Canadian history was killed by ideologues determined to push a false narrative about a common history lacking historical veracity against a true history of the Euro-Canadians who founded this nation. Euro-Canadians will pay attention to Canada’s history only when they see themselves in the narratives as nation-builders, pioneers and settlers, willingly acknowledging the role of minorities, but without the contrived fabrication that it was a nation commonly created by Nigerians, Tamils, and Moroccans.