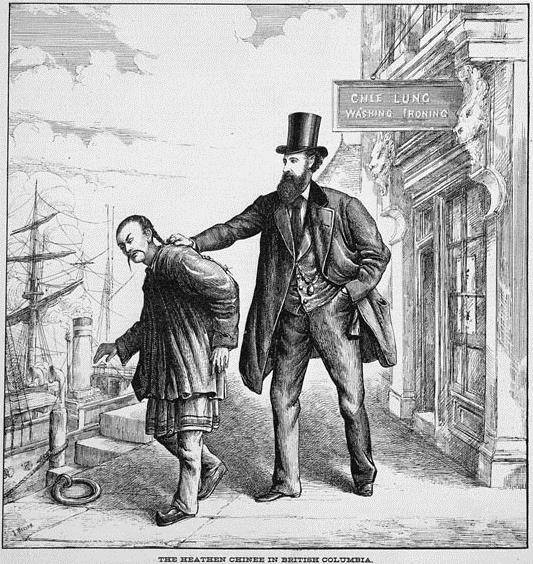 For many years, our immigration industry has used the Labour Day Riot in Vancouver in 1907 to shame the White population in Vancouver for its ancestors’ attacks on Chinatown and Japantown.

If anyone were to ask the immigration industry where they were getting their information, 99% would have to admit they were parroting what they had been told. So let’s look at what really happened by asking one important question: Was there a connection between the unexpected arrival of about 11,500 Japanese, East Indians and Chinese in 1907 and the Vancouver Labour Day riot of that year?

There is clear evidence that there was. Before the riot, British Columbia had undoubtedly complained to Ottawa about the numbers of new arrivals in 1907. But Ottawa did not listen until after the riot. It sent its Deputy Minister of Labour, Mackenzie King, to Vancouver to conduct a Royal Commission to determine how much compensation should eventually be paid to (1) the Japanese and (2) the Chinese whose property had been damaged. While King was doing his work, Ottawa asked him to conduct another Royal Commission which would investigate why around 11,500 Japanese, Chinese and East Indians had arrived in the first ten months of 1907.

The population of Vancouver area was about 60,000 at the time and a sudden inflow of 11,500, (In Mackenzie King’s words) had “naturally caused great alarm”. About half of Vancouver’s population paraded through Vancouver streets before the riot––an indication in 1907 of significant Vancouver support for an end to cheap illegal importation of Chinese and Japanese labour.

Note that the term “Chinese Head Tax” is incorrect. The term should be “Chinese Labourer Head Tax”. Chinese businessmen and their families, Chinese students and consuls were exempt from the Head Taxes. The first significant tax was $50 in 1886. Next was the $100 tax in 1901 and the $500 tax in 1904. Prior to 1904, Chinese business contractors had imported most of the Chinese labourers from China, but individual Chinese also became involved from 1904 on. When the $500 Head Tax was imposed, Chinese contractors began to find that there was no longer much profit in importing these labourers.The result was that in the 3-year period immediately following the imposition of the $500 Head Tax, very few Chinese labourers came to Canada.

With the drop in Chinese labourers, a Japanese immigration company, the Canadian Nippon Supply Company, saw a business opportunity. The problem was that its opportunity would undermine the measures that Ottawa had put into place to deter cheap Japanese labour. Without telling Ottawa, this company arranged with the CPR to import between 500 and 2000 Japanese labourers to work in the CPR’s western Division which at that time employed around 5000 workers.

Rumours about these deals had circulated in 1907, but were confirmed only during Mackenzie King’s Royal Commission investigation after the riot. There is no question that the rumours and worker frustration were major reasons for the high turn-out in the parade.

In response to the frustration which had started in the late 1800’s, the British Columbia legislature had passed a large number of laws to curb Asian cheap labour, but almost all were disallowed by Ottawa whose MP’s were isolated from the issue and found it hard to understand what British Columbians were complaining about. Mackenzie King stated clearly that the major factor in the conflict between locals and Asians was the economic advantage Asians had in the labour market.

Labourers’ wages in Canada were considerably higher than those in Japan, China or India. For example, at cheap-labour wages in Canada, Japanese labourers received 10 times the wage they were paid in their home country; Chinese labourers, 20 times; East Indians, around 50 times.

Most Asians came to Canada as “sojourner” males, in contrast to the many married local labourers. “Sojourners” were the equivalent of Temporary Foreign Workers. Most wanted to make as much money as possible quickly. They also lived very frugally, and sent money home. Most did not intend to stay. In the 1901 Royal Commission Report on immigration, many B.C. residents testified that they had been displaced from work and knew of many other locals who had been forced to leave. Others complained that many potential married settlers had been discouraged from coming to B.C. because of the low-wage labour.

King’s inquiry demonstrated the chaos in Canada’s immigration system in 1907 and how labour disputes in far-off Hawaii could affect Canada. In 1907, there were between 50,000 and 60,000 Japanese agricultural workers in Hawaii. Facing a cut in wages in Hawaii and replacement workers being transported from Portugal, thousands of Japanese labourers were encouraged by shipping companies and others to leave Hawaii for supposedly greener pastures in Canada and the U.S.

Mackenzie King concluded that if thousands more were to do the same thing, the potential for extremely serious conflict with the resident population in Canada was great. This was because there was clearly not enough employment for those who had arrived.

One of the major results of King’s investigation was that Ottawa enacted continuous passage legislation, which required any Japanese who wanted to come to Canada to get permission from the Japanese government to come directly from Japan. Even before this law was approved, it was illegal for Japanese who had been permitted to travel to Hawaii, to next travel from Hawaii or from any other place which Japan had allowed them to go to, without the permission of the Japanese government.

It is not clear exactly how many of the 8125 Japanese who arrived in Canada in 1907 had come from Hawaii, but Mackenzie King estimated that number to be 6398. The remaining 1650 Japanese had traveled from Japan. Of the 1650 Japanese workers, 900 were being imported by the Canadian Nippon Supply Company (a Japanese labour contractor) and another 750 were returning to Canada or coming as immigrants approved by the Japanese consul.

The illegal emigration from Hawaii, the scheming of the Canadian Nippon Supply Company, and the 1907 riot which resulted from the scheming, were major international embarrassments to the governments of both Canada and Japan. To compensate for the corrupt and under-handed actions of its citizens, Japan quickly agreed to Canada’s continuous passage law which required that people coming from Japan had to sail directly from Japan to Canada, not from some intermediary port like Hawaii. Japan conceded that Canada had ample justification for making this law.

The obvious damning thing that can be said about the current interpretations of the 1907 Vancouver Riot is that they are wrong. In spite of this, they have long been used to elicit guilt from Canadians and subsequently to perpetuate unjustified high immigration levels today.

One positive thing that can be said about the federal government of 1907 is that it did try to correct its mistakes.

In contrast, recent federal governments have done nothing.

So we have a question:

Who are the “enlightened” in the debate over the 1907 immigration chaos and the Vancouver Riot issue: the White workers and Mackenzie King or the Deceivers of today who want to inflict White Guilt to justify Replacement of Whites by Chinese Immigrants?