Memo To Jordan Peterson: I’m Proud Of My Forbears’ Achievements — And So I Should Be! 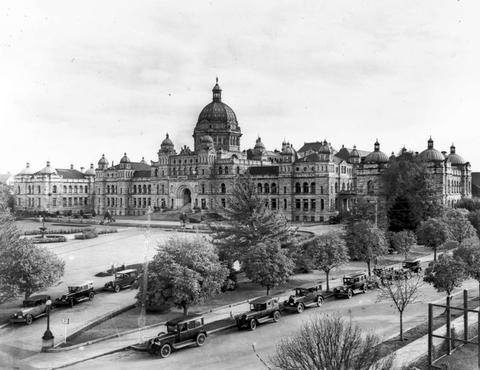 Jordan Peterson, on numerous occasions, has told us that we cannot rightly feel pride in something that we had no part in accomplishing. One cannot be “proud”, therefore, of Western Civilization. Anymore that one can be proud of his blue eyes or his right handedness. We inherited it, but we did not create it. So what are White identitarians on about? What are they “proud” of? The whole notion of “White pride” or “Western pride” or ethno-European pride is absurd. Or so says Jordan Peterson.

I was thinking about Peterson’s contention recently. My thoughts were triggered when I gazed at a framed photograph that has been hanging in my main floor hallway for many years now. It is a photograph of my great grandmother standing on the front stairs of the house her husband, “Kelly” Johnson, had just completed in the then young city of Victoria, B.C. The year was 1886.

I first came upon it in 1975, and was instantly electrified. I had heard of this house, but I didn’t imagine that it had been photographed. Understandably, I was seized by an urgent need to go to Victoria and look for it, with little expectation that it was still standing. Nine decades had passed after all, and a good part of Victoria had fallen victim to “progress”. It was my great fortune that the address had been inscribed by pencil on the backside of the photo.

However, when I arrived in Victoria and walked through the district, I found that that address was non-existent. I could have given up the search, but something made me persist. I went to Victoria City Hall, not far away, to inquire. To my astonishment and glee, they told me that the street name had changed, but the house number was on record.

Shaking with anticipation, photo graph in hand, and an updated street name engraved on my mind, I walked about the neighbourhood, found the street and suddenly there it was — wedged between two apartment buildings. I strode up the stairs, the stairs where my great grandmother once stood, knocked on the door, and a curious young married couple opened it up cautiously and partially. They seemed to have been in their early thirties, and both of them had blond hair and blue eyes.

I wasted no time. I held out the photo and said, “This was my great grandmother standing here 89 years ago.” I continued, “They were Icelandic immigrants, and this location, in the Fernwood district, was the heart of an Icelandic enclave which boasted its own Icelandic newspaper, theatre, and shops. The community was large enough and important enough in the city’s history that there is an Icelandic Chair at UVic today.”

They were stunned. And so was I when they told me that they were Icelandic Canadians from Gimli and Winnipeg, which was, for my great grandparent parents, a stepping stone to Victoria.

Then came the big question. “My great grandfather was a carpenter, which was an esteemed craft in Iceland for its want of trees. It was very important not to waste wood in a deforested land of sheep pastures. So he was trained as a craftsman. And since he built this house, I am desperate to see his work. Could I have a look?” They pushed the door wide open and enthusiastically gave me the grand tour.

I was not disappointed. Kelly’s work was a masterpiece. And the fact that it remained intact was a well-deserved tribute. The house changed hands several times in its long history, and none of its owners succumbed to the temptation of replacing it with a larger structure, or selling out to developers. The only thing that was missing was the copollo at the top of the roof.

I still cannot find the words to convey the emotions that overcame me during that tour. I can only sum it up with one word. Pride. I felt pride in my great grandfather’s accomplishments, and the culture which nurtured his skills and fuelled his urge to seek out new horizons. The Viking desire to explore the world and make a mark obviously ran in his blood. Viking desire? Certainly. But it was also became the trademark of European civilization.

I owe so much to him. Not only my existence, but for my passion for writing. He came to Canada with only one book. The Bible his father, a Lutheran minister, gave him to offer strength and solace during his brave journey to an unfamiliar world. It was written in Old Norse, a language exclusive to Icelanders, and still spoken in fragmented sentences or phrases by some of their descendants in Manitoba, the Pacific Northwest and Minnesota, or so I am given to understand.

According to my grandmother’s testimony, once Kelly finished the house, he gathered his small family around the table to say one thing. “From now on, English is the language of this household.” He then looked directly at my grandmother, then a 7 year old child, and stated with even greater emphasis, “To succeed in this country, you must not only speak and write English, but speak and write it better than the people who were born here.” My grandmother took that to heart. And so did my mother, who to her dying day, carried a dictionary everywhere she went. No vacation was complete without it. She even took it with her while on the bus, or sitting in a waiting room. When she was hospitalized, an English dictionary was the only book she wanted to read. She was always engrossed and delighted by what she found. When we were in her company, we had to be mindful of the way we spoke. She was quick to correct our mistakes, and would interrupt us in mid-sentence to do so. At times my poor, beleaguered father, armed with only 6 years of education, thought he had married a school teacher. Mom’s linguistic perfectionism was instilled in my brother to such a degree that he developed a remarkable facility for speaking other languages with such fluency that his pronunciation was flawless, or so said the Germans, Norwegians, Italians and Punjabis he conversed with.

That my friends is the direction that my great grandfather pointed us toward. A direction informed by a desire to explore new territory, take unfamiliar pathways, acquire more knowledge, learn more languages and master them. My grandfather’s achievements made his grandchildren’s and great grandchildren’s achievements possible, just as my grandfather’s achievements were made possible by his parents and the Viking explorers and settlers who came before them. Their sagas, their literature and the Christianity they eventually embraced were what made the what they were. Reading, writing and storytelling remains central to Icelandic identity to this day. Throw a rock in the sky and it can’t help but land on a poet or a writer or a polemicist. If I can take pride in his achievements, I can take pride in theirs too. I can treasure Nordic traditions and Icelandic culture. I can treasure Western Civilization.

Jordan Peterson could not be further wrong. We can and must be proud of the achievements of those who came before us. We must cherish their legacy, and unabashedly sing its praises from the roof tops.