Why Are So Many White Feminists Converting To Islam? 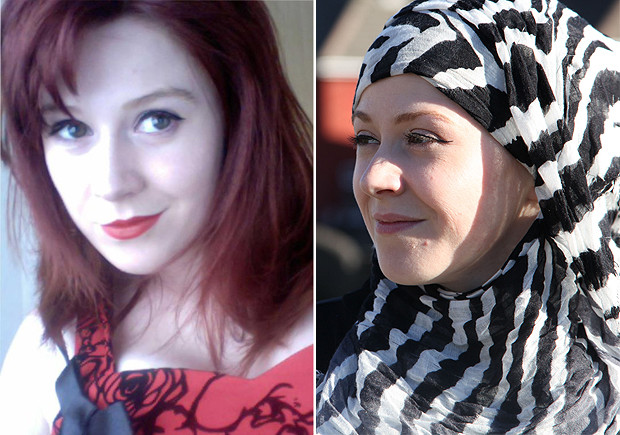 No one knows why Louise converted to Islam. No one knows why 27% of converts to Islam in North America are white, or why three in four of these white converts are female. It seems logically inconsistent. Many of us, accustomed as we are to the liberties that our pluralistic society confers, find this phenomena difficult to comprehend. Baffling in fact. Why would Louise embrace a backward faith that regards her species as unclean and her gender subordinate? In the absence of definitive answers, we can only speculate.

Perhaps her nocturnal tours of the neighbourhood were less a mission to relieve her bowels than a spiritual odyssey that ultimately led to Allah. Perhaps under the light of a full moon she looked down upon her turd and saw the work of a Divine Creator. Perhaps her stealthy defecation on Mr. Davis’s front lawn engendered a sense of shame and disgust which made her question her permissive upbringing. Perhaps it was the very rigidity of Islam with its strict dos and don’ts that most attracted her.

Perhaps there is a more fundamental reason to account for her shocking conversion. A reason that while compelling, is too politically incendiary for any but the most suicidal among us to mention, never mind consider. Perhaps Louise found Islam enticing because she understood what feminists don’t. She realized that she is a pack animal, and that packs are hierarchical. There is a chain of command. There is the pack leader, and his followers. That understanding is built into her nature. She is hardwired to lead — or submit. And her psychological comfort is dependent on a clear understanding of where she stands on the pecking order, and what her role is in the group. For a pack animal, nothing is more stressful than uncertainty about his or her place in the hierarchy.

It was Louise’s misfortune to have been born and raised in an environment where pathological concepts like democracy and gender equality were thought to be desirable and viable. She was raised to believe that dinner table handouts were her entitlement, and that her over indulgent superiors were to be regarded as “partners”. She was even given cultural signals to the effect that she and her kind should assume leadership positions.

While she embraced these messages on a conscious level, she didn’t on a subconscious level, for they conflicted with her nature. Until her conversion, Louise was a very conflicted individual, and the inner turmoil was killing her. Islam offered her a way out. That is the raw truth of the matter.

When patriarchal Christianity succumbed to progressive secularism, when clerics with lisps and pink shirts took to the pulpit to preach the PC news rather than the Good News, the field was left wide open to Islam. Dogs and people, pack animals both, crave clarity and moral absolutes. They need a clear demarcation of good and evil, right and wrong, dos and don’ts. Plus a sense of purpose. If you don’t give a dog a job, he’ll find one. Or the devil will find it for him.

This unhappy conclusion is a bitter pill for progressives to swallow. It is hard to admit that for Louise, becoming a Muslim was a rational choice made to deal with existential problems that white female retrievers face in Western society.

In a nutshell, conversion to Islam was Louise’s way of coping with the stresses of modernity.