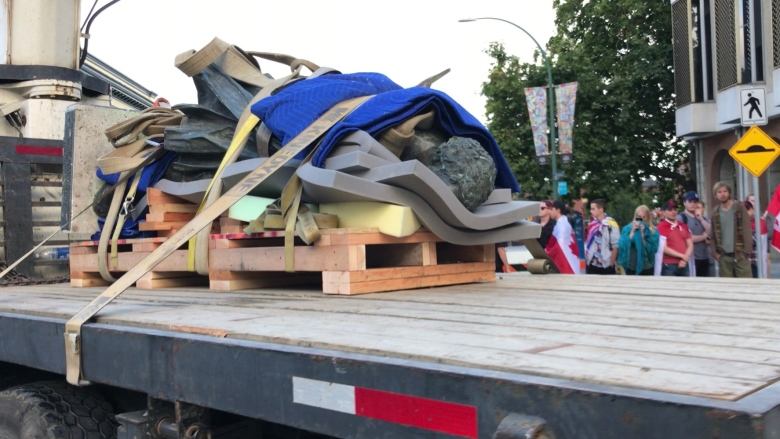 The radical politics of statue removal, which initially targeted various Confederate monuments, has migrated northward. It started this past January when the Mi’kmaq First Nation demanded the removal of a statue of Edward Cornwallis in Halifax (the city that he founded in 1749) on the grounds that Cornwallis, as governor of Nova Scotia, put a bounty on Mi’kmaq persons as punishment for a violent raid on a sawmill. Anyone who killed or imprisoned a Mi’kmaq received a cash reward for the deed.

The City of Victoria, the capital of British Columbia, has upped the ante with a far more radical measure. The councilors in a 7-1 vote recently ordered the removal of a bronze statue of Sir John A. Macdonald from its place at City Hall where it had been standing since 1982. Mayor Lisa Helps chose to avoid public discussion, consulting only with the Songhees and Esquimalt First Nations, who plan to conduct a “blessing, cleansing, and healing” ceremony on this site. The statue is to be put in storage while the municipal government, in the Orwellian words of Helps, attempts to “recontextualize” Macdonald’s place in history.

So, what is Macdonald’s place in Canadian history? Macdonald was not only the first Prime Minister of Canada but also the principal Father of Confederation, the founding of Canada that occurred in 1867. During his time in office (1867-1873, 1878-1891), Macdonald saved the country from American annexation by building the national railway that connected East with West. He also worked hard to mitigate historic suspicions that pitted English Canadians against French Canadians. Macdonald not only kept a diverse nation together but also created the conditions for economic prosperity and political stability that Canada enjoyed well into the 20th century. (He was also the MP for Victoria from 1878 to 1882.) In American terms, the removal of his statue is analogous to pulling down a statue of George Washington.

What is the reason for this radical measure? The plaque that has replaced Macdonald’s statue says it all. It refers to him as a “a leader of violence against Indigenous peoples,” because he initiated the residential school system for aboriginal children. From 1876 to 1996, the federal government, with the assistance of Christian churches, ran boarding schools that promoted “assimilation,” namely teaching the language and culture of English and French civilization to these kids, who in many cases were taken from their parents. The impact of this process was considerable: by the 1940s, 8,000 aboriginal children (or half of the aboriginal student population) attended these institutions.

The Report of the Truth and Reconciliation Commission in 2015 concluded that this long experiment had been a disaster for these children, who were subjected to cruelty, deprivation, and violence (sometimes ending in death). The report also recommended that true “reconciliation” between the Canadian nation and the “First Nations” could happen only if Canadians go through a process of “indigenization,” principally more education that exposes the horrors of this school system as well as the overall suffering that these peoples have experienced throughout Canadian history.

It is unfair to suggest that Macdonald was devoid of sympathy for the aboriginal peoples. In May 1880, he urged his fellow parliamentarians in the House of Commons to

remember that they (the Indians) are the original owners of the soil, of which they have been dispossessed by the covetousness or ambition of our ancestors … the Indians have been the great sufferers by the discovery of America and the transfer to it of a large white population.

However, the way in which Macdonald rationalized the legitimacy of the residential school system understandably grates on modern ears. Three years later, Macdonald justified the purpose of these schools in Parliament by insisting that Indian children are “savages” that “should be withdrawn as much as possible from the parental influence, and the only way to do that would be to put them in central training industrial schools where they will acquire the habits and modes of thought of white men.”

As a classical liberal, I believe it is absolutely indefensible to allow the state to remove people, especially children, from their hearth and home except in cases of violence or abuse. Even though most Canadian leaders thought that this enforced pedagogy was the only way to help nomadic peoples adapt to a rapidly industrializing nation, it is never justified to establish the precedent of permitting Leviathan this degree of power over vulnerable populations.

Yet the most controversial charge that the Commission has leveled at Macdonald and his successors is that they committed “cultural genocide” by actively disallowing aboriginal children in these schools from learning about their own language, history, and culture. The implications of this accusation are massive. If genocide is truly at the heart of the Canadian identity, then the whole country may have to be placed in storage. Put differently, if Canada is truly on the same moral plateau as Hitler’s Germany or Pol Pot’s Cambodia, then we need to rebuild our entire nation from the ground up.

I doubt that many of my fellow Canadians have thought about what this project entails. Simply put, we will be required to go along with a state-sanctioned politics of purification. Our citizens (especially our children) are to be taught that the taint of historic injustice is so great that nothing pertaining to the Anglo-French experience in Canadian history is worthy of preservation. That is a terribly wrong lesson to teach, in light of Canada’s historic achievements as a politically moderate and stable nation. Macdonald himself deserves tremendous credit for this success. In a speech that he gave in 1865 (two years before Confederation), Macdonald insisted on creating a nation that would protect the “rights of minorities,” including those who disagree with majority opinion. This would be “the great test of constitutional freedom.”

Does a politics of purity, which reduces a nation to its historic injustices, allow for the civilized dissent that Macdonald championed? As Hegel explains in The Phenomenology of Spirit (1807), this sort of politics is suited to a ‘beautiful soul’ who believes in his own moral superiority while he mercilessly judges others for their reprobate actions. Therefore, there is no reason to allow dissenting views, which are impure anyway. Yet this person is immediately vulnerable to the charge of hypocrisy, or scrutiny of his own “impure” motives and behavior.

What Hegel calls an “inner moral conceit” at work here aptly describes the radical Left today, which reduces western civilization to a story of oppression, violence, and injustice. This politics of purity is bound to boomerang on its architects who must account for impurities on the Left. In Ottawa, the capital of Canada, there is a collection of statues known as the “Famous Five,” referring to five Canadian feminists (Nellie McClung, Emily Murphy, Louise McKinney, Henrietta Muir Edwards and Irene Parlby) who successfully fought for women to be classified as “persons” under the law so that they could enjoy the same rights as men. Yet these same feminists vigorously defended eugenics for non-white races (including aboriginal Canadians) who were deemed “unfit” for childrearing. Is it time to remove their statues as well?

Nor does aboriginal history neatly cooperate with leftist revisionism. As the historian Leland Donald documents in his study Aboriginal Slavery on the Northwest Coast of North America (1997), the practice of slavery was pivotal to the economy and social structure of these hunter-gatherer societies. Readers can also consult the journal of John R. Jewitt, an English armorer who was captured by the Nootka tribe in 1803 while part of an expedition exploring Vancouver Island. For two years, Jewitt was the personal slave of Chief Maquinna, and had a firsthand opportunity to see how fundamental the institution of slavery was to the Nootka. The aboriginal enslavement of European persons was not an isolated practice either. Thanks in part to the spread of Christianity, the slave trade eventually ended.

My purpose is not to score points in a game of tit for tat. Rather, I am issuing a warning to anyone who wants to play with the fire of purity-politics. If we cannot trust the state with the care of vulnerable children, why should we trust it with the power to rewrite or erase our history?

Originally published at Law and Liberty.