Canada In Decay: One Year Later 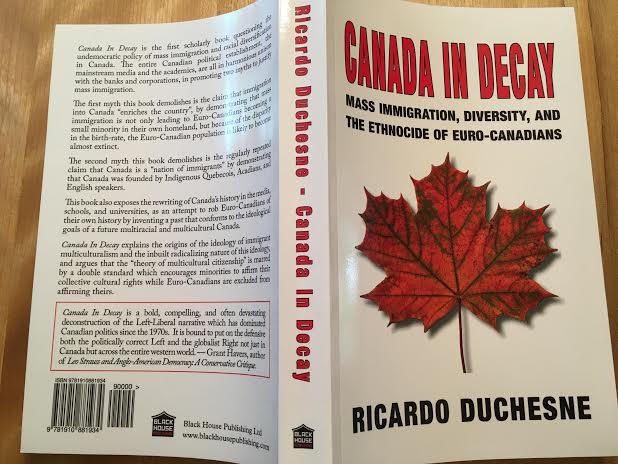 August 22 marks one year since the release of Canada in Decay: Mass Immigration, and the Ethnocide of Euro-Canadians. I thought this book would have an impact in the long run as the first scholarly effort to explain the nature and origins of multiculturalism from a truly critical perspective, without kowtowing to the banks, politicians, and conformist academics. I expected malicious attacks from the establishment for daring to expose the incessant lies that sustain immigrant multiculturalism and for speaking in favor of a Canada that retains a healthy White majority. What I did not anticipate was a consistent number 1 ranking at Amazon.ca in various subjects the moment the book was released last August.

I am somewhat surprised the establishment decided to ignore the book rather than attack it. I was interviewed four times about it, two times by CBC radio, one time by a university student paper, and by Walrus magazine. They all decided against publishing/broadcasting the interviews. Perhaps I sounded too reasonable, persuasive, and fair-minded, in defending the rights of Euro-Canadians to engage in identity politics. They could not fit me into their simple minded boxes. They could not paint me as an irrational xenophobe, a person who did not know Canada’s immigration history, or a person with fascistic tendencies.

They could not counter my claims that

But the reason I am writing about Canada in Decay is that I want to encourage patriotic Canadians to purchase it. This book is a serious scholarly study, not a political pamphlet. A few readers have complained about this. They wanted a shorter, no more than a 100 page statement. They are wrong. I can’t stress enough how crucial it is for our side to have a fully developed criticism of immigrant multiculturalism steeped in historical analysis, political theory, sociology and philosophical reflection. The academic books promoting multiculturalism number in the thousands located in shelves across all Canadian universities. Many of these books are crappy, written by conformists with a poor education. But they are massively influential in being the only sources students are compelled to read. Whether we like it or not, full length books and journal articles have afforded leftists with a smug satisfaction that their ideas are legitimately based on “peer review research” whereas our ideas are simple outbursts from deplorables.

The left controls the production of knowledge, all the universities, the printing presses, magazines, newspapers, political parties, corporate media, think tanks — everything. They feel assured mocking our ideas when no one in academia promotes them. Our side has a lot of mass support, some of which is starting to be heard, with quite a few blogs. But if we are going to mount a sustained opposition, reverse decades of multicultural propaganda, and all the damage done to Canada, we need high level intellectual products. No social movement has ever gained political power without an intellectual foundation, without fully developed arguments against the establishment.

Therefore, since Canada in Decay is the only fully developed argument against an establishment determined to marginalize Euro-Canadians, I urge you to purchase this book as a metapolitical act. The longer the book stays as a best seller, the more it will be purchased, the more its ideas will spread, and the stronger we will become. We must totally undermine the deceitful ideological foundations of immigrant multiculturalism.

Once you read the book, I also encourage you to write a short review at Amazon.ca, if you agree with the arguments. This is very important. It is a key way to counter the anti-White establishment and its efforts to ignore and malign this book. Academics and fake journalists are furious this book is a best seller, let’s keep them angry for a long time!