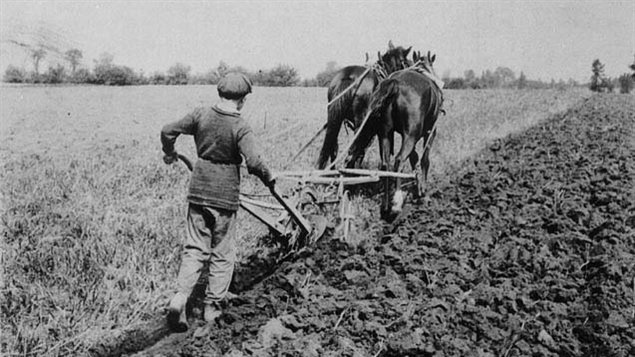 Daniel Panneton, a “Historian & Outreach Officer at Multicultural History Society of Ontario,” calls extremist my view that Canada was created by pioneers and settler farmers. He says it is “racist” and a “myth” to say that Canada was created by Euro-Canadians. The only historically accurate view of Canada’s past is that it was a “culture of white supremacy, a culture that is continually replicated and reshaped by our political and cultural institutions.”

The notion that “Anglo-Celtic” settlers endured hardships in Canada working in their farms is a “myth”. Euro-Canadians were lazy colonizers who simply “usurp Indigenous lands rights” as their property, calling themselves “civilized” and designating the “Other” as “uncivilized”.

He claims that students in our schools and universities are still being taught the myth that Euro-Canadians were hard-working “frontiersmen” when in fact they were nothing but white supremacists who erased the indispensable role of Indigenous peoples in the making of Canada. Canadians did not endure any “sacrifices” and it is not true that they had large families.

Panneton offers no evidence to back any of these blanket statements. He surmises instead that his reading of The Wretched of the Earth, a 1961 book written by a Caribbean black (which I and every undergrad has been required to read across the West since published) is enough documentary evidence to question the “myth” that Canada had any substantive Anglo identity based on actual hard work. This book taught Panneton that the European colonization of Africa and the way they “essentialized” all peoples in Africa as “Negro” and “backward” applies to the way Euro-Canadians essentialized Amerindians as similarly “uncivilized”.

He condemns my best selling book Canada in Decay for allegedly arguing “that multiculturalism is a covert plot to wipe out the white race by the globalist left.” It is obvious Penneton did not read this book, and I would be surprised if he has carefully read and fairly evaluated any book that portrays Euro-Canadians as hard workers who created the very comforts Penneton enjoys without being grateful to his ancestors.

I repeat, not a single source, book or article, is referenced by Penneton the “historian” of the “Multicultural History Society of Ontario”. This is what passes for “historian” nowadays. When graduate students are celebrating diversity and condemning “white supremacy” they are not required to cite sources and employ facts. It is a self-evident truth instilled upon children the moment they enter primary school that “diversity is our greatest strength” and that “white supremacists” control Canada. Penneton imagines himself a true “hardy” Canadian challenging the dominant “white supremacist” establishment while expressing these self-evident truths.

Having completed an MA in History, Penneton is currently doing “Museum Studies” at the University of Toronto. I wonder if he knows that museums were invented by Europeans. With origins dating back to Hellenistic Greece, museums really took off during the 1600s when Europeans went about displaying all sorts of natural objects, plants, animals, artifacts, brought back from their amazing voyages of discovery. During the post-WWII years, museums were built in city after city across the West as amazing storehouses of natural and human history, and as centers of education.

Who would have known that as Western nations are being forced to populate themselves with millions of diverse immigrants, museums are becoming places dedicated to the celebration of the far lesser achievements of non-Europeans, officially committed to diversity in the West, coupled with exhibitions of Europe’s achievements as if they were the “achievements of humanity“, and the transformation of all museums into ideological weapons to encourage Europeans to view their nations as the “common home” of humanity?