Corrupt Sikhs Have Justine Trudeau In Their Pocket 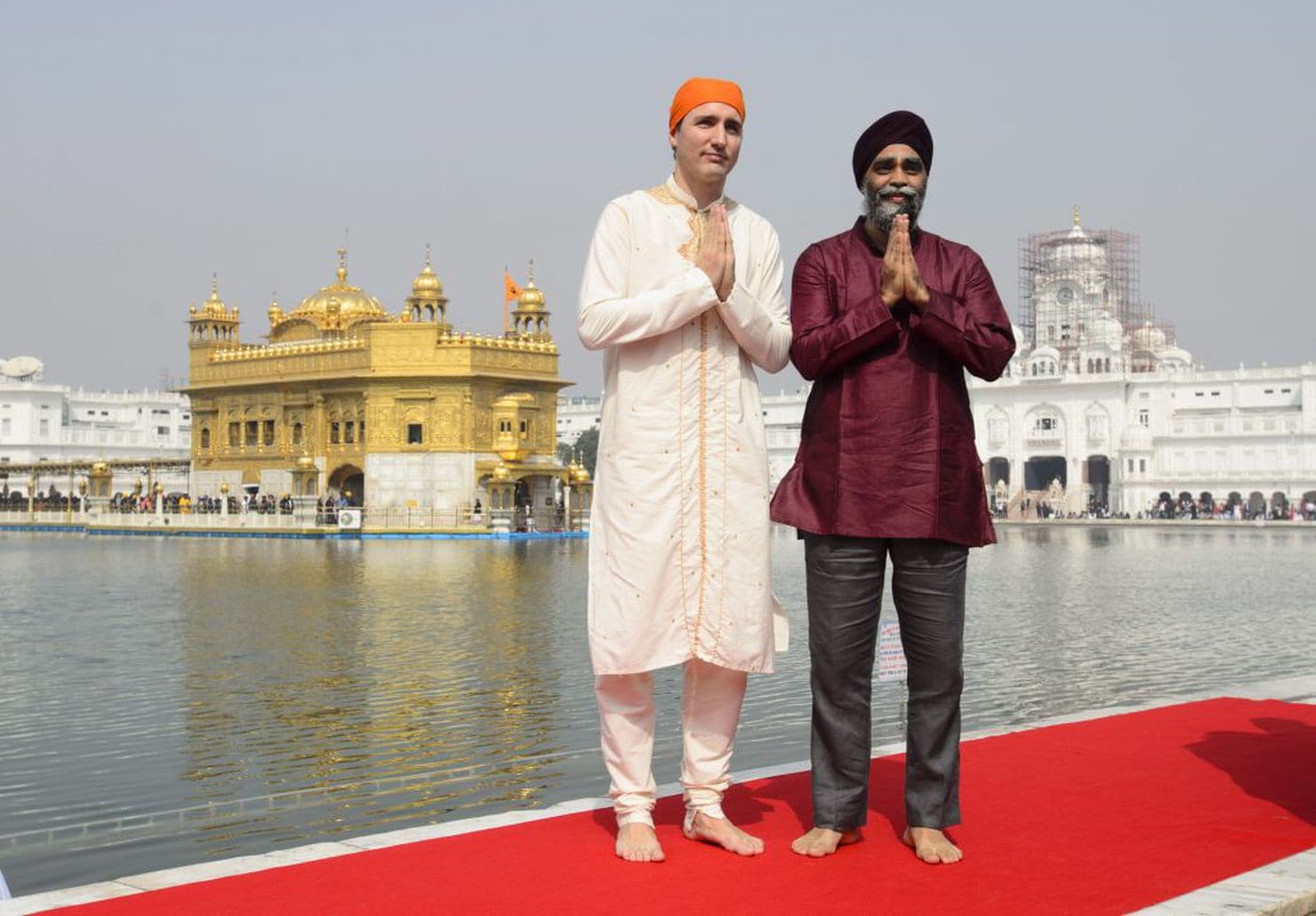 There is one very simple answer for why Trudeau’s visit to India was a disaster: Corrupt Sikhs have him in their pocket.

In other words, corrupt, crude Sikhs in Canada think they can have their way with him and with Canada. To them, Justine will not stand up to defend Canada from their clawing and grasping for power. In fact, they know he will continue to degrade himself and Canada.

Here is the evidence of Trudeau’s treachery:

(1) He has denied proper Cabinet representation to Canada’s majority population. According to news reports in 2016, Trudeau arrogantly boasted to a group of students in a Washington State incident that he had more Sikhs in his Cabinet than the PM of India did. (Canada had four; India had two) Let’s elaborate: Sikhs represent about 1% of the population of Canada, yet Trudeau has given them 13% of the positions in his Cabinet — including that of House Leader! Let’s be blunt: To have made such appointments demonstrates Trudeau’s contempt for Canada’s majority population. Most humans would show some shame for making such appointments. But Trudeau has a severe shortage of shame.

(2) Trudeau’s desire to get Sikh votes has blinded him to history and to the Canadian victims of crude Sikh violence. He seems completely unaware that crude Sikhs assassinated India’s PM Indira Gandhi and that in doing so, they probably permanently alienated a significant part of India’s population. Here are some more details for him and those who support him: In 1985, Crude Sikhs loaded a bomb on an Air India flight in Vancouver and succeeded in murdering 320+ passengers aboard that plane which exploded over Ireland. That incident is not a small detail in Canadian history. In fact, until the Muslim Brotherhood carries out its plan to destroy Canada, it will probably stand as the largest mass murder in Canada’s history! Honest Sikhs in Canada must cringe every time Trudeau gets down on his knees for the crude Sikhs.

Honest Sikhs also know that crude Sikhs boast behind Trudeau’s back that they have control of Trudeau and even laugh at Trudeau for being such a fool. The evidence of that is clear: Crude Sikhs demanded and quickly received an apology from Trudeau for the Komagata Maru incident of 1914. The much bigger question that honest Sikhs and the families of the 320+ people murdered in the Sikh Air India bombing have is this: Why did Trudeau not demand an apology from the crude Sikhs in Canada? Specifically, why did he not demand that crude Sikhs in Canada “out” the Sikhs who planned and committed the Air India mass murder? Many crude Sikhs know who the murderers are. In fact, some of the Sikhs in Trudeau’s government undoubtedly know who is responsible for the bombing, yet the murderers remain unidentified and unpunished to this day — 33 years later!

(3) Trudeau sees nothing wrong with bending to the wishes of crude Sikhs whose primary reason for being in Canadian politics is to increase their numbers in Canada and to exert Sikh influence over Canadian government — even if that influence is far from positive. To make this point clear, let’s point out that recently Sikhs in B.C.’s Metro Vancouver boasted that a Sikh parade had drawn 400,000 Sikhs to attend. Let’s repeat that number: 400,000! Why did Canada allow so many of them to enter? For Trudeau, the presence of Sikhs is a matter of votes. But for Canada’s majority population, how is the importing of Sikhs supposed to contribute to their well-being?

Furthermore, let’s note Trudeau’s appointment of Sikh MP, Randeep Sarai, to the House of Commons Standing Committee on Immigration. Sarai is one of four ethnics on that committee of 10 voting MP’s. Why do Visible Minorities, who comprise 40% of that committee and are entrusted with making important immigration recommendations to Parliament, comprise such a large percentage of that committee when their percentage of Canada’s population is only 20%?? In appointing Sarai to that committee, Trudeau demonstrated that he does not understand the purpose of immigration. In a few words, let’s make a very important point: immigration has existed to contribute to the well-being of Canada.

Let’s repeat: Increasing the number of Sikhs or other ethics in Canada does not contribute to the well-being of Canada. Sarai has obviously interpreted his appointment as a signal that Sarai has the right to continue the crude behaviour that Sikhs have become notorious for and which other immigrant groups such as the Muslim Brotherhood want to imitate. If Canadians are looking for an example of crude behaviour, Sarai gave it to them recently: he invited Jaspal Atwal to an official dinner during Trudeau’s visit to India. Let ‘s recall some history: Atwal was convicted of attempting to murder an Indian Cabinet Minister while that Indian Cabinet Minister was visiting Vancouver Island. Let’s be graphic: Atwal put two bullets into the Indian Cabinet Minister. Sarai clearly knew what Atwal had done, but he also believed that because Trudeau supported Sikhs so shamelessly, that he could get away with delivering such an insult to India as inviting Atwal to a Trudeau dinner in India.

(4) The insults don’t end there. MP Sarai, who should probably be addressed as the MP for India’s Punjab province instead of the MP for a B.C. riding, has been using his position to commit more treachery on Canada. He has been lending his weight to Chinese-Canadian MP Jenny Kwan’s demand that Canada remove any medical restrictions that might deny medically-challenged immigrants(Sikhs included) entry to Canada. All Canadians know that Trudeau created a border crisis in 2017 by making his extraordinarily stupid announcement that Canada would take all refugees that wanted to come here. The new recommendation from Sarai and others on the House of Commons Standing Committee has the potential of creating an even bigger crisis: allowing huge numbers of sick immigrants into Canada, adding even more of a burden to Canada’s Health Care system. If the nightmare of Third World immigrants flooding Canada to benefit from Canada’s social safety net is not clear now, when will it be? Both Sarai and NDP Kwan in particular should be informed about NDP founder J.S. Woodsworth. In the NDP and in Canadian political circles. Woodsworth is regarded as a Saint. He very sensibly opposed allowing sick immigrants into Canada in 1909 on the grounds that doing so would overburden Canada’s charities. In 1909, those charities, not government, had the role of helping Canada’s sick. Woodsworth, was right then and he is right now. Sarai and Kwan are wrong. Their advocacy for unhealthy immigrants is foolish and treacherous.

(5) Finally, Canadians will probably not be pleased to hear that in 2016 at an event in Montreal, Trudeau seemed to relish being re-named Justin “Singh” Trudeau. If behaviour such as relishing Sikh flattery and assuming virtual Sikh identity (as again illustrated recently in Trudeau’s choice of clothing for his trip to India) does not make it evident that Trudeau is in the pocket of crude Sikhs and that he will betray Canada whenever asked by such Sikhs, what will?