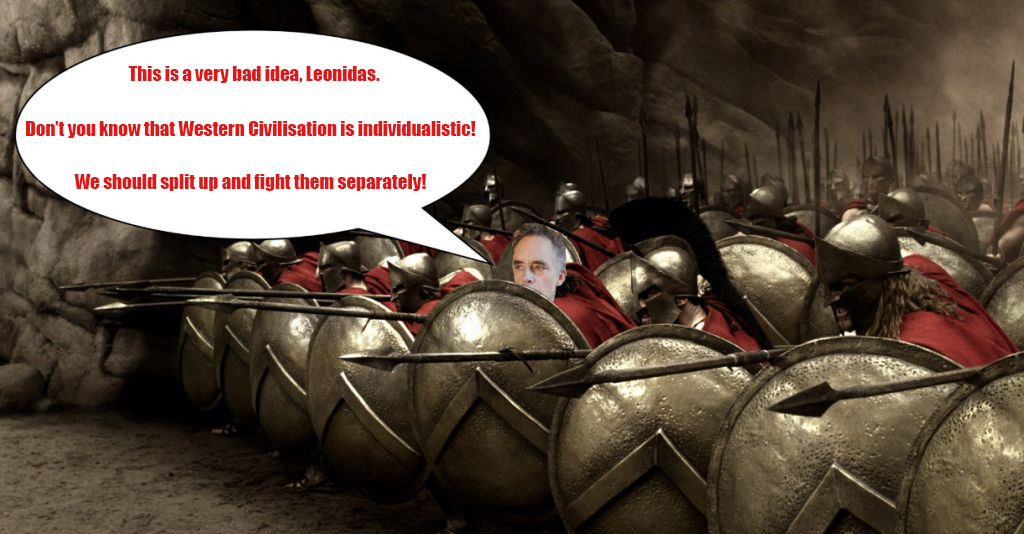 Jordan Peterson’s rejection of identity politics makes no sense in the face of an establishment from left to right committed to the diversification of all Western nations through relentless immigration, which is fast reducing Whites to a minority, and is premised on the prohibition of White identity, while encouraging the inherently collectivist identities of non-Whites.

Peterson often says he is a “classical liberal” or a “libertarian” in response to charges that he is an Alt-Righter because he dismisses the claim that there is “White privilege.” He insists both leftists and Alt-Righters are into identity politics, the prioritization of group differences over individual choice and character. He values the Western ideal that the rights of an individual should not be determined by membership in a racial or a sexual group.

Peterson is a mainstream conservative inside an academic sea where only leftists are welcomed to navigate. He appears to be Alt-Right because he condemns the way our universities have been taken over by academics who sacrifice the peculiarities of individual identities with their relentless overtures to minority racial groups, Muslims, and LGBT people.

Under the conditions of mass immigration and multicultural identities, individualist politics is fatal to White individuals

This attack on postmodernist identity politics is all good. The problem is that a politics of individualism in our current age of mass immigration and multicultural identities is fatal to White individuals. Europeans were uniquely responsible for a politics of individual rights, and this libertarian way of thinking worked as long as European nations were not open to millions of immigrants coming from inherently collectivist cultures. Europeans were classically liberal only under the taken-for-granted assumption that their nations were actually created and inhabited by a people with a strong ethnic identity, strong traditional customs, and ancestries. No nation was ever created by abstract individuals without ethno-national identities and a strong sense of who belongs and who does not, friends and enemies.

Western nations were unique in successfully combining individual rights with a strong ethnic identity, as was evident in their immigration restrictions before the 1960s. Minority rights for historical minorities is consistent with ethnic liberal nationalism. What is not consistent with liberal rights is the mandate that all Western nations must grant citizenship rights to millions of alien immigrants.

The libertarianism Peterson is defending is hardly “classical” and really a cultural Marxist version concocted by the same leftist academics he despises. John Locke (1632-1704) took for granted the fact that the “liberties” he valued were meant for “British” individuals rather than for hundreds of thousands of immigrants coming from vastly different collective cultures.

The difference Peterson draws between males and females inescapably separates individuals into distinctly identifiable sexual groups. He is saying that individuals are more than abstract beings with “classical” rights since they are also members of sexual groups. While he is not calling for special rights for any one group, he is identifying and judging individuals in terms of their membership in clearly demarcated biological groups. And he believes that this membership plays an important role in the career paths and outcomes of particular men and women. The Alt-Right accepts this view. This is not a dangerously controversial view outside academia and some media outlets.

It is not that one side is into identity politics and another is not. Insomuch as leftists say that males and females are really equal, they are saying that males and females are just individuals. The difference is that for the left the playing field in the West still favours males, and for this reason leftists insist that we must play identity politics. While leftists are always finding new victims, in principle their identity politics is meant to be temporary. They want a future individualistic world in which social conditions allow for the development of the full potentialities of all individuals regardless of race and sex.

Leftists believe that male-female identities are far more fluid than “biological determinists” would have it. They say there are many other identities besides heterosexuality, and that individuals should have a right to decide which differences they prefer to be identified with, rather than being boxed into a male-female “binary.” They emphasize the ways in which individuals can “socially construct” their identity. The male-female binary is itself a social construct, an imprisoning construct imposed by males. While postmodernists sometimes say that these multiple sexual differences have a bio-psychological basis, “I was born gay,” they like to stress individual choice, and the possibility of changing one’s identity in the course of one’s life, or living out multiple identities. They want political changes that will give all individuals room for full expression of their individual identities.

The same logic applies to the way postmodernists use racial categories. They don’t believe in races. They believe that in our current society minorities are “racialized” by dominant Whites, and that overcoming this racial hierarchy necessitates race identity politics. Their aim is to transcend altogether any form of racial identity for the sake of a society in which everyone is judged as an individual.

The same goes for classical Marxists. They speak of class identities in light of their understanding that capitalism with its individual rights is a system that groups individuals into unequal classes. To create a society of real individual merit, they insist, we need to get rid of class structures. Marx abhorred the grouping of individuals into classes. The history of classes was a history of exploitation. He wanted a society that would live up to the principles of the liberal Enlightenment. He wanted “the genuine and free development of individuals.”

On the other hand, the identity politics implicit in Peterson’s distinction between the sexes is naturally-based and is thus meant to be permanent. He is locked inside a battle for individualism he cannot possibly win. It does not matter how many times Peterson says he is not into identity politics, against preferential treatment for any one group, human beings are naturally and historically divided into sexual and ethno-national groups. These natural inclinations are gaining traction and will intensify as feminists and diversity trainees carry on their war against males and Whites. You can’t fight a system that emboldens multiple identities by asking males and Whites to behave as individuals. This is unilateral disarmament.

The claim that the left and the Alt-Right play the “same identity politics” but from opposite ends is extremely misleading. Alt- Righters recognize there is a spectrum, a certain “fluidity” between races and sexes. But they disagree with postmodernists in believing that this fluidity does not invalidate clearly demarcated identities. The postmodernist focuses on multiple differences without a proper sense of which differences amount to substantive distinctions. The Alt-Right focuses on primordial and millennial differences, and accepts the political dynamics that follow from these differences. The Alt-Right does not deny the crucial role of constructing-socializing natural identities and improving national cultures. Traditional conservatives have always emphasized socialization, except that they work on bringing out the full potential of what nature has given us rather than socializing nature out of existence.

Emphasizing a pure individualist politics is excusable only temporarily for reasons of expediency, but not in the long term at the cost of violating obvious truths.