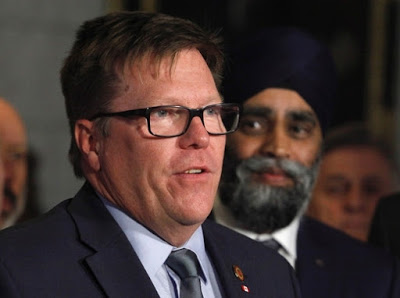 Committee season in Ottawa is beginning to wind down for the Christmas holidays, but November is also the deadline for the Standing Committee on Canadian Heritage to report its recommendations back to parliament. You may recall that controversial Motion-103 “condemning Islamophobia” which mandated this Committee to study racism and “Islamophobia” in Canada under the heading of “Systemic Racism and Religious Discrimination.”

Those who know this Committee as a traditional snooze-fest won’t be disappointed. Despite (or because of) the notoriety of M-103 (Islamophobia) you won’t be surprised to hear that Committee meetings were a competition among Committee members to commiserate with Mohammedan “victims” and apologists, with a very light sprinkling of “opposition” from the Conservatives in the form of nit-picking over the definition of “Islamophobia.”

Also known as the Backbencher Committee, this Standing Committee is a parking space for try-hard MPs where their limited skill-set of “talking to people” can be showcased. Thinking they could ride this committee to Attention on the heels of M-103 they are experiencing the habitual disappointment that comes with a below-average IQ; the victory of passing the Motion has ended and now it’s time to clean up the mess. Now, not only are they stuck on a Liberal dominated Heritage Canada committee but one chaired by chief Liberal narcissist Hedy Fry, both of which are characterized by the words “irrelevant and annoying.” No wonder most committee members skip it altogether and send their colleagues from even higher up in the parliamentary nosebleed section in their stead.

Recently on this site, Rémi Tremblay lamented the possibility of a Quebec commission to study “systemic racism.” Well, Mr. Tremblay need wonder no longer how such a commission would present itself. A typical Committee meeting involves listening to witnesses such as the Ontario Human Rights Commission (OHRC). “We are still in business today, and still uncovering forms of discrimination that have been hidden from public scrutiny for too long.” Said OHRC Head Salesman Renu Mandhane, letting us know what she really thinks raci$m and di$crimination are all about. The concept of “evidence” takes on a new meaning when Ms. Mandhane relates the story of a friend-of-a-friend in the first person.

It usually goes like this: After check-in at the airport, I go to the security area. My carry-on will pass through the security belt, and I will pass through the scanner, both without a hitch. Even so, almost every time, I’ll be told: “You’ve been randomly selected for additional screenings.” It’s only a few extra seconds or minutes, but I’ve started to feel like replying back, “It’s not random when it’s every single time.”

I know exactly how she feels. Every time I drop toast on the floor it lands butter-side down. Every single time. “It’s not random when it’s every single time.” But wait, first she said it was “usually,” then “almost every time.” Soon it will be “sometimes,” and if asked to verify with actual evidence, no doubt it will turn into “rarely” or “never,” but least she hasn’t come to believe her own lies as fully as Ayesha Chaudhry, another witness,

… teachers, doctors, cashiers, strangers driving by in cars — told me … that I wasn’t actually Canadian, that I should go back home, and that I was a terrorist.

This woman is claiming that her teachers and doctors (plural) called her a terrorist and told her that she should go back home. She wants us to believe that several of her Canadian teachers looked at her and said “you are a terrorist, go back home!” and that more than one of her doctors, presumably during a medical examination, told her she was a terrorist and told her to “go back home.” Unfortunately this is a Committee where lying carries no penalty whatsoever; note that she carefully avoided saying that an actual crime actually occurred which might then be investigated by the police who would soon find out that none of these events ever occurred. Neither she nor any other witnesses were testifying under oath. Perhaps she was told by her doctors to go back home — because she was wasting their time with her victimitis.

After countless hours spent condemning the Great Satan, it is time for a change of topic — the Greater Satan known as the Alt-Right. Self-promoter and narcissist Michel Juneau-Katsuya was happy to go on record:

Distinguished members of the committee, my introduction will be mainly in French for the sake of functioning a little bit faster. As you can see, I have a sexy French accent.

That’s right, his second sentence in front of a Parliamentary Committee is “I have a sexy French accent.” This type of narcissism should come as no surprise in an age where the only qualification to become Prime Minister is to look cute. Mr. Juneau-Katsuya’s other qualification (beyond his “sexy accent”) include his time with the Canadian Security Intelligence Service, although there is no evidence that he progressed beyond Trainee Analyst before his mutually-agreed upon departure. He is now the owner and employee of The Northgate Group, a “consulting company.” He makes his main point right away:

Continuing with his Backwards-World themed testimony Mr. Juneau-Katsuya goes on to blame the Alt-Right for “an erosion of Canadians’ values and spirit,” and concludes by inadvertently asking the right question:

Do we need more statistics or another killing before we take action?

The kind of “action” Mr. Juneau-Katsuya believes should be taken against patriotic Canadians he leaves unsaid, however.

Moving on, the Alternative Reality Award must surely go to Liberal MP Anju Dhillon (Dorval—Lachine—LaSalle) who completely misunderstands the concept of policing, and believes the Police are doing more harm than good when they investigate and prevent crime:

Unfortunately, it’s the reality, we’re walking down the street and we can be stopped because we’re displaying suspicious behaviour. This can also raise people’s level of insecurity.

Tell me about it; how soon before you won’t be able to walk down the street wearing a suicide vest and waving a hunting knife? But this is what our Country has come to — sandwiches eating people.

The Standing Committee on Canadian Heritage has concluded its meetings on “Systemic Racism and Religious Discrimination” and is expected to present its report to parliament by the end of November.