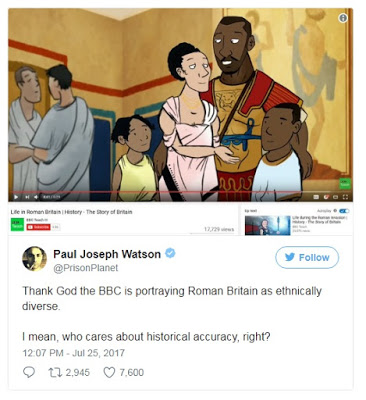 Recent events have made plain the conformism and deceitfulness of much of the British historical establishment.

When I heard earlier this year about an upcoming film about the evacuation of the British Expeditionary Force from Dunkirk in 1940 I automatically assumed that the filmmaker would submit to the current ideological Diktat and give prominent roles to ethnic minority actors regardless of the fact that ethnic minorities did not play any great role in the events in question. By way of example, the 2007 film Atonement, which is also set around the disaster of 1940, features a Black soldier in a British infantry unit. I think most would agree that this was a rarity 77 years ago.

Now, when Dunkirk appeared in the cinemas, the film defied expectations and contained white actors that looked like the predominantly white British and dominion servicemen involved in the debacle in northern France. It was not long, however, before the omission of black minority ethnic roles was noted by the liberal thought police. On 5 August 2017 Ms Jasmin Khan, associate professor of history at Oxford, attacked the film in an article in the beloved New York Times for failing to feature any Indian servicemen1 and, of course, Muslims in particular. The role of the Indians had thus been ignored by the ungrateful and parochial British.

Now, with all due respect to the small number of Indians who were present in northern France in 1940, their contribution simply was not, as she argues, “significant” in the context of the military operation. Failing to feature Indian soldiers in a film about the Burma or North African campaigns would indeed be inaccurate and unfair but the Indian servicemen at Dunkirk were not ignored; they were simply there in extremely small numbers (around 1,000 according to some estimates).2 It looks like Ms Khan is peddling voguish identity politics, fostering grievance culture and seeking to make a name for herself in the US mainstream media.

One fact that Ms Khan fails to mention in her articles3 is that support for Britain in the Indian subcontinent during the Second World War was, understandably, lukewarm and Indians were at times the enemy and not the ignored saviours of Britain. Let us look at just one example. In 1942 the German government and Subhas Chandra Bose,4 an Indian nationalist leader who was courting the Axis powers as part of his struggle against British rule in India, set up the Freies Legion Indien (Free Legion of India). Several thousand Indian POWs and deserters joined the Legion which was intended to pay a key role in the German conquest of India after the defeat of the Soviet Union.

Chandra Bose met Hitler and a conference was held in Berlin to publicise Chandra Bose’s cause. After Germany’s defeat at Stalingrad, the Legion lost its raison d’ȇtre and was stationed in various parts of German occupied Europe.5 Chandra Bose meanwhile left Germany for the Far East where he set up the Indian National Army that fought alongside the Japanese. Numerous statues of Chandra Bose have been erected in India but calls from the left and Antifa for statues of this genuine Nazi collaborator to be torn down are strangely lacking.

A Typical Family In Roman Britain?

Another egregious example of the wilful misrepresentation of historical reality is the now notorious representation of what is supposedly a typical family in Roman Britain in a BBC educational video. The same video features a black Anglo-Norman nobleman at the signing of the Magna Carta in 1215.

Mary Beard, a professor of classics at Cambridge, sprang to the defence of the video on twitter, and in the left-wing Guardian newspaper, with the usual banalities about the multi-ethnicity and diversity of the Roman empire, although she failed to address the question of whether the video contained an accurate depiction of the typical family in Britain – which was the real issue.

Yes, we all know that the Roman Empire consisted of many different ethnic groups and we all know that soldiers from all over the empire were present in Britain but how can it be seriously maintained that this was a typical family of the time? I guess that deep down Ms Beard knows this is not the case; that is why she avoided the question of whether this could be a typical family in Roman Britain. But rather than pursuing historical truth, thinking empirically and writing history, as Thucydides put it “as a permanent legacy and not a showpiece for a single hearing” she preferred to cosy up to the BBC and the Guardian, two leftist institutions wielding great power in terms of granting visibility via articles, interviews and broadcasts and the lucrative fees that go with them.

What we are seeing here is an attempt to turn history into another fake academic subject along the lines of Gender Studies, Post-Colonial Studies and LGBTQ Studies, in other words a subject built around and protected by a political ideology where conformity to an orthodoxy takes precedence over the pursuing the truth and capturing the essence of things. We are now reaping the grim harvest of decades of cultural Marxist domination of the media, the government and the academy.

The 300 Spartans At Thermopylae? Not exactly…

It has become clear that the questions of identity, of nationalism v. cosmopolitanism, of rootedness v. deracination, and of populism v. transnational bureaucracy have shifted to the centre of cultural and political debate. How well is the British historical establishment addressing these great issues? Back in 2015, to their credit, 30 historians called for the UK to leave the EU,6 but in 2016 more than 300 of the UK’s brightest and best entered the public arena, publishing a letter in the Guardian warning their country’s rubes and hobbits not to forsake the inestimable benefits of membership of the Union.7 The publication of the letter was accompanied by a cosy little junket in Downing Street hosted by then Chancellor of the Exchequer and top globalist George Osborne. Let us take a look at some of the signatories in action in other settings. At the Munk debates in Toronto last year Simon Schama, a top dog BBC historian, sought to ridicule his debating opponents Mark Steyn and Nigel Farage for raising the issue of migrant sex attacks in Germany.8

I believe no further comment is required. Meanwhile, Neil “Davos man” Ferguson, sensing perhaps a change in the wind, has admitted he was wrong on Brexit and failed to foresee the events of 2016.9 Perhaps Prof. Ferguson would have been better informed if he had spent more time outside his smart set academic-governmental bubble and sought the views of the blokes down at his local pub.

[2] Franz-Stefan Gady, “No, India’s Army Did Not Play a ‘Significant Role’ at Dunkirk”, The Diplomat, August 8, 2017
[3] She takes a similar line in an article for the BBC from 2015.
[4] Indische Freiwilligen-Legion of the Wehrmacht, For Free India — The Free Indian Legion
[5] For more details of the Indian Legion see Hans Franzen, Im Wandel des Zeitgeistes, Munich, 1992, pp. 98-111; and Rudolf Hartog, Im Zeichen des Tigers, Herford, 1991
[6] Celebrity historians launch campaign for EU referendum and claim there is no “European Demos”, City A.M., February 26, 2015
[7] “Vote to leave EU would ‘condemn Britain to irrelevance’, say historians”, The Guardian, May 25, 2016
[8] The Munk debate: Mark Steyn responds to Simon Schama | Global Refugee Crisis
[9] Niall Ferguson, “I was wrong on Brexit”