Jagmeet Singh And The Rise Of Identity Politics In Canada 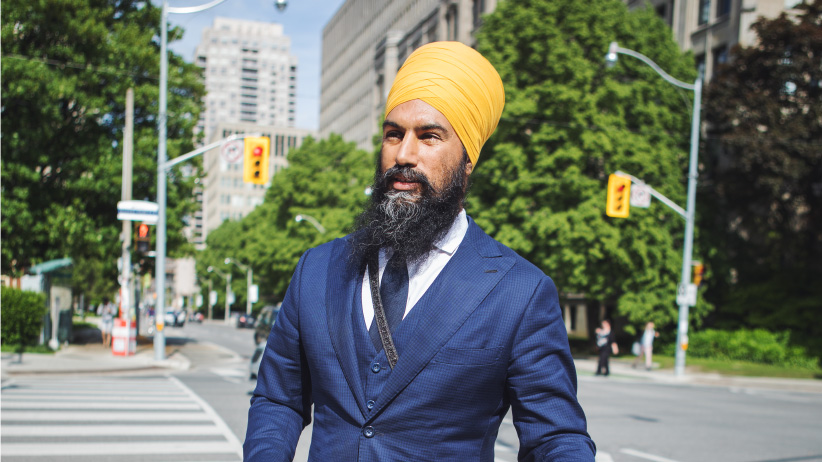 Every social movement has its heroes. Within the spectrum of Canadian political correctness, this role is currently fulfilled by Liberal Prime Minister Justin Trudeau. His incessant promotion of all-things multicultural — in particular a fervent dedication to our Islamic and LGBT communities — has advanced a globalist agenda to the extent that to even question its motives draws the wrath of social justice warriors from coast to coast.

Yet, being a most insatiable collective of hyper-aggressive globalists, this social dynamic is incomplete. What is required, of course, is a leader to emerge from one of Canada’s coveted Third World communities.

This is not Justin Trudeau, but it is NDP leadership candidate Jagmeet Singh. Clad in slick suits and designer turbans, Mr. Singh recently became official poster-boy for Canada’s diversity industry. It is indeed a privileged position, as the standards held for “traditional” Canadian politicians do not apply to “multicultural” politicians such as Mr. Singh.

Recently, a protestor interrupted an NDP event in Brampton, Ontario. A woman got onstage and began to aggressively question Mr. Singh regarding his position on issues relating to Islam, and Sharia law in particular. Granted, the approach was ill-advised, as the spontaneity of her inquiry was not a proper platform in which to address sensitive issues of this nature.

Within a democratic political environment, however, a candidate running for office is required to address the concerns of their constituents. Jagmeet Singh did nothing of the sort. Rather, he waxed philosophical regarding the need for all Canadians to “love each other.” A noble thought, yet one which entirely evades the issues. Recently, Mr. Singh released a public statement that he opposes a motion put forth by the provincial government of Quebec requiring public servants to reveal their face when administering services to clients. After months of inquiry, our protestor wanted answers — yet none ever arrived.

The result of her interruption of the meeting was universal condemnation. Media attacked her. Liberal politicians vilified her. All of a sudden, Singh was catapulted to a position not unlike that of globalist messiah. He had single-handedly defeated the bad, bad racist. Victory was assured, and Mr. Singh was declared a hero.

Canadian “identity” politics have changed the nature of political discourse in Canada, and not for the better. Time was when the main issue within politics were issues — for example addressing public concern, as well as one’s duty to constituents. Times have changed. Today, after a forty year program of diversity indoctrination, the main issue is the identity of a politician.

Within contemporary society, Third World political figures are depicted as vital and brimming with benevolence. Conversely, Anglo-Canadians politicians — save Justin Trudeau — are old and tired. At present they are something of a political dinosaur. On the other hand, Singh and others like him are rendered untouchable. If one dares speak against them, prepare to be branded a racist.

What privilege! Protected by a teflon-coating of political correctness, identity politicians are accountable to no one but their own particular community. As for the Anglophone minority in Mr. Singh’s riding of Brampton, Ontario — a riding where over 90% of constituents are of Third World origin — these people have no choice but to grin and bear it. Any dissent amongst the ranks will bring the inevitable accusations of bigotry, and the rest. Talk about being placed in social straight jacket.

Since gaining office, Justin Trudeau has been a pin-up poster boy of culture-eroding globalism. Naturally, this is not good enough. For Canada’s diversity-bandits, nothing ever is. What is required is the real deal. A non-Anglophone, Third World Canadian leader of the variety we find in Jagmeet Singh — the NDP’s answer to their political failings of the past decade.

Singh is a social justice weapon-in-waiting. It is he the liberal left is placing on a political pedestal as an example to all Anglophone and Francophone Canadians, and the message is: do not mess with us, because we hold the most powerful weapon in modern-day Canadian politics — a “silver bullet” known as the accusation of racism. As for social and political issues, let them go gentle into that good night along with all forms of traditional Canadian identity. Canada now has a globalist messiah in the form of NDP candidate Jagmeet Singh. The post-modern promised land of Justin Trudeau’s “new” Canada awaits.