Chinese Demands: Recognize Us As “Nation Builders of Canada” 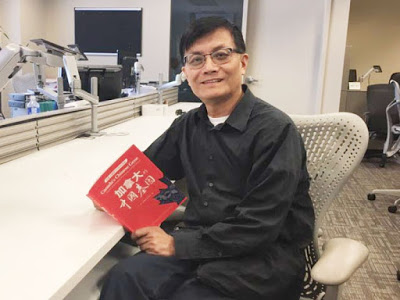 A book with a weird title, Canada’s Chinese Gene, was released this summer claiming that Chinese-Canadians “should be recognized as nation builders, instead of immigrants.” The book was written in the language of its author, Guo Ding, who looks like a prototype member of the Chinese Communist Party.

Guo Ding dedicates himself to the promotion of Chinese culture in Canada as a TV producer for Omni Mandarin. He says that in order for Canadians and Chinese to get along it is very important for everyone to understand that Chinese people have been culturally and genetically an intrinsic component of the Canadian nation throughout history.

Chinese-Canadians were there [in Canada] over 150 years ago and Chinese ancestors played a key role in building the Canadian Pacific Railway, which was the foundation of the federation. They were not just cheap labourers, but nation builders.

Ding says he is a man with good intentions. He wants Canadians learn to view the current arrival of millions of Chinese as a normal continuation of past trends. There is nothing to be worried about the sinicization of cities like Richmond and Markham since Canadians are already genetically Chinese to begin with. Once Euro-Canadians come to understand that they don’t have an identity of their own, Chinese can reciprocate by not building 10,000-square-feet houses on Canadian farmlands.

Chinese-Canadians will develop a deeper connection with Canada once they are recognized as co-equal creators of the nation. They will happily put English signs in their businesses. They may well show some compassion for the Canadians pushed out of the housing market. Ding asks his country men:

Can you share some of the fortunes you made with the vulnerable people in the society? Yes you can, because (Canada) is your home, too.

At OMNI BC Mandarin News, Ding is described as a man of enormous achievements, “one of the most reputable and respected current affairs commentators in the Chinese community,” author of “several books,” expert in history, international affairs, and philosophy, host of a popular call-in TV show about Taiwan, winner of the prestigious Jack Webster Award for Best Chinese Reporting, and recipient of the Queen Elizabeth II Diamond Jubilee medal.

This is how most promoters of diversity are described notwithstanding the vacuity of their arguments. The facts are clear: Chinese immigrants played a microscopic role in Canada’s history. In 1901, 96 percent of the Canadian population was European in origin; there were only 17, 043 Chinese immigrants (born outside Canada) relative to a population of 5.3 million. Vancouver, with the highest Chinese proportion throughout Canada’s history, was virtually a White European city from its beginnings in the 1870s to the 1980s. In the 1950s, when the city had been fully developed into a metropolis, the British accounted for about 75 percent of the population, and other Europeans accounted for about 18 percent, whereas the Asian proportion (Chinese and Japanese combined) accounted for only 3 percent.

Patricia Roy’s Vancouver. An Illustrated History (1980), exhibits a city that was overwhelmingly British in its architectural landscape, notwithstanding its Chinatown and Little Tokyo. All the major landmarks were British: the Post Office, built 1905-1910; Dominion Trust, the Canadian Pacific Railway station; Canadian Bank of Commerce; the Strand Theater and Birks Building, with their sidewalk canopies in 1933; the Tudor revival style homes in Shaughnessy Heights in the 1920s. The sports, the education, the legal system — every institution was British. The Founding Fathers of Vancouver, the Mayors, the magistrates, the school trustees, the chief constables, the physicians, the presidents of the Board of Trade were all British descendents [See Robert McDonald’s Making Vancouver. 1863-1913 (1996), and Alan Morley’s Vancouver. From Milltown to Metropolis (1974)].

Following the logic of the argument that the Chinese were founders of Canada, we could say with greater substance that Whites were the founders of Modern China, Japan, and the entire Third World, since European capital, technology and often engineers built all the railways of the non-European world in the nineteenth and twentieth centuries. In fact, non-Western nations have been able to industrialize thanks to European ingenuity, scientific knowledge and benevolence.

Of course, the same historians in our universities who describe English and French Canadians as mere “immigrants” paint the amazing acts of European generosity across the world as “imperialistic intrusions” while exaggerating and glorying the menial contributions of non-Europeans in European nations. This is the madness we are dealing with. The aim of our enemies is to destroy the historical roots of Euro-Canadians in order to pacify them into accepting their dispossession by masses of immigrants arriving daily.

Canada is yours, don’t let them take your roots from this great land!