I Am A Canadian And This Is My Story 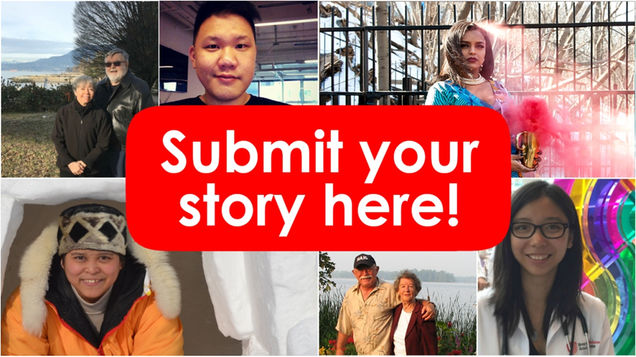 In the run-up to “Canada” Day you may have come across a series of short video vignettes submitted by “Canadians” to the CBC, which had encouraged them to “tell your story.” And so they did, in droves.

But curiously it seemed that only “New” Canadians were so inclined. White home-grown, old-stock Canadians who wreaked of normality, heterosexuality or ‘privilege’ were conspicuous in their absence. I wonder why?

The truth is, the CBC is not interested in ordinary Canadians, but extraordinary Canadians. Poster boys for the first post-national state. That is, they want to showcase the Canadians who cut the politically correct mustard or pass the ideological litmus test. Only tolerant and enlightened Canadians need apply. Friends of the CBC, in other words. They do not want to “reflect” the image of present day Canada as much as to depict the image of the Canada they want to see unfold, the Canada of the future, the Canada they are trying to engineer.

Take a look at a sample of the “Canadians” who made to the CBC hit parade, and you will get a flavour of what I am talking about: “What’s Your Story.”

It is abundantly evident that the CBC was not celebrating “Canada” Day, but Immigrant Day. July 1st is all about the deification of the immigrant, coupled with constant reminders of our shameful treatment of indigenous people, just in case we forgot that we too are immigrants or descendents of immigrants, and as such have no moral authority to restrict further immigration.

The message was clear. Canada is a nation of immigrants. Immigration is what defines this country. Perpetual immigration on a grand scale therefore is necessary to validate that contention. So move over, make way, park your gripes, shut up and smile.

Thus, CBC viewers were subjected to a parade of immigrants “of colour” and an assortment of the fashionably oppressed. Members of almost every certified victim group. They told us of their heroic journey to a wonderful ‘welcoming’ country where they could be free to be themselves. They concluded their tales with the same punch line. “This is my story and this is my Canada.” Indeed it is.

But Canadians of European ancestry have stories to tell too. The CBC just doesn’t want us to hear them. So in the interest of fair play and “inclusion,” I thought I might post the submissions of the excluded, the reputedly bigoted “basket of deplorables” whom the CBC deems unworthy of notice and unfit to speak — the very ones who foot the annual $1 billion bill for the CBC. Stories like these:

My name is Tracy Bennett and I was raped by a Somali taxi cab driver in Edmonton, the city I once knew. After being shafted by diversity, I long to return to the safety of a Canada that is long past. A past that I am told was “White and boring.” If only I could be bored again. If only I could be bored by less congested streets, less gridlock, lower rents, affordable housing, fewer ethnic gangs, unlocked doors and social cohesion. I feel unsafe, insecure and disconnected. This is my story and this is their Canada.

My name is Mike Byers. I grew up in Vancouver, became a journey carpenter and through hard work and dedication, I eventually established my own home construction company. At one point there were 20 people in my crew, all paid at union rates. Then my bids were undercut by Indo-Canadian and Chinese contractors who employed untrained foreign born workers, many of them illegal, at cut-rate wages. My business folded and now I am selling cars in Kamloops. This is my story and this is now their Canada.

My name is Shelly Peterson. I once had a dream that I could raise a family and own my own home here in Greater Vancouver, as my parents did. But even with advanced degrees and well paid professional jobs my partner Mike and I have trouble paying the rent, never mind find the money for a down payment on a small condo unit. Having kids is out of the question. Mass immigration and laundered Chinese money have sent the city’s real estate prices into the stratosphere, and many of the friends I went to school with have fled the city to find a life elsewhere. If they do, they often have to settle for work unrelated to their skills or training. It seems that I will be forced to follow their path. This is my story and this is now their Canada.

My name is Craig Muller. I spent most of my life working in the woods as a logger, and I made some good money back in those days. But after I was injured, and the Workers Compensation Board turned down my claim, I couldn’t put food on table. I lost my livelihood and my marriage. Since then I’ve been living on the streets, most of the time. It’s funny that the government finds money for Syrian refugees but not enough for people like me. They say they are going to build more social housing units but it will be a drop in the bucket. I thought maybe that I could stay at the Welcoming Centre but it seems that I am not welcome. I am not an undocumented immigrant. No one seems to be able to afford housing in this city and when you look around you can see why. Too many people are coming in, and most of them are coming in from you know where. This is my story and this now their Canada.

My name is Barbara Turnbull. Ever since I was a girl, I dreamed of becoming a school teacher. Nothing in life seemed to be so rewarding. So when I entered university, I enrolled in the “Professional Development Program,” and completed my teacher training. I sent in applications to school boards across the province, but I could only find an opening in Vancouver. I found the job more challenging than I ever imagined. It was not that the class sizes were too high — they were — but that there were so many students who could not speak English adequately. I was overwhelmed. Instead of job satisfaction, I experienced frustration, stress and exhaustion. And I am not alone. Many other teachers have suffered the same fate. But whenever we complain to city politicians, they tell us that their hands are tied. The federal government is not providing them with the money and resources to cope with massive numbers of immigrants. They say that they are not in charge of immigration policy. But I notice that none of them lobby to cut immigration intakes. I can’t take it anymore. I am looking for another line of work. This is my story and this is their Canada.

My name is Michael Renwick. I grew up in Richmond B.C. when it was covered with the best farmland in Canada. In my youth, nature was close at hand in every corner of the Lower Mainland. It was a paradise for kids. We built forts in the woods, saw frogs on vacant lots, fished on the river and cycled on the dykes. As an adult I became a passionate bird watcher, hiker and conservationist. However, mass immigration changed everything. Fighting against development, densification, sprawl, and destruction of local habitats was a losing battle. Worst of all, the environmental movement let us down. Instead of targeting the source of the problem — mass immigration-driven population growth — they attacked symptoms. They hacked at the branches of evil rather than cut its root. The Greater Vancouver and Fraser Valley I know and loved is gone, replaced by strip malls, big box stores, high rises, condos and subdivisions. Its population is three times as large as the Healey report of 1997 said was ecologically sustainable. Saddened by what transpired, I left the city to seek a quiet haven in northern BC. Another urban refugee. This is my story and this is their Canada.

My name is Tim Murray. You know my story. And I know that this is not my Canada — nor my CBC.