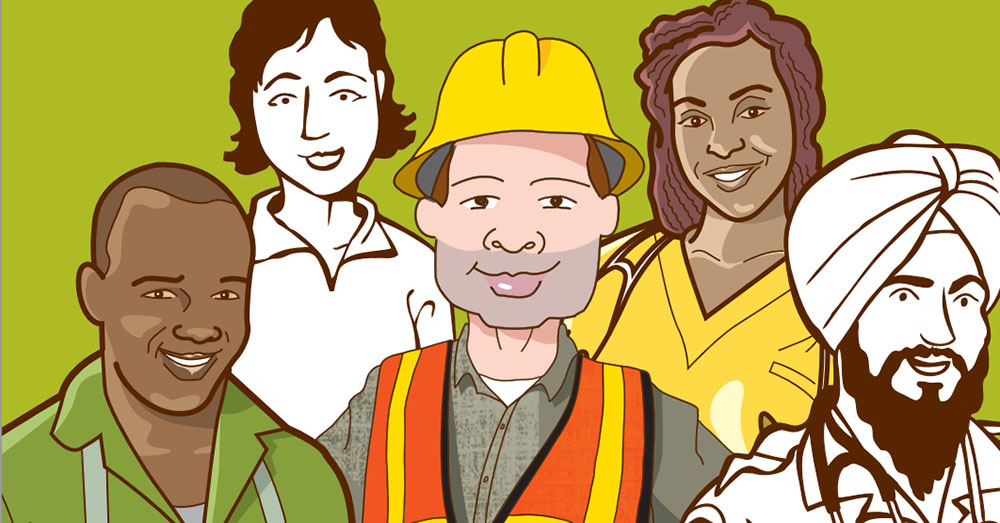 The language of ‘Employment Equity’ (EE), the Canadian equivalent of Affirmative Action, but meant for federal civil servants, is suffused with Orwellian words intended to make White Canadians feel that their replacement is a wonderful undertaking in which everyone gains and no one loses. To make matters worse, the “studies” underpinning the pursuit of employment equity are nothing more than a maze of suppositions, faulty data, and wilful deceptions. But, hey, they are a cash cow for diversity bureaucrats.

Under this grand undertaking for human equity, the government classifies civil servants into four ‘Employment Equity’ groups: Aboriginals, women, people with disabilities and visible minorities. The default category is that of the White male, although that term is never used for fear of ‘triggering.’ The goal is for the civil service to be ‘representative’ of Canadian society as a whole, meaning, for example, that if half the Canadian population is women then half the civil service should be women. This should be concerning because it implies hiring in the civil service works on a quota system, employing people only because of their skin colour, gender or disability.1 In fact, many job opportunities advertised within the civil service explicitly state that members of Employment Equity groups will be preferred.

One important aspect of Employment Equity is that this information is collected on a voluntary basis, which in Newspeak is called ‘self-identification.’ This means that employees must proactively fill out the necessary documents in order to be identified as one of the four groups (or a combination of the four). As a result, the number of people in each group is not only inaccurate, but the government does not even know how inaccurate it is because for obvious reasons they can’t go around to see how many visible minorities chose not to describe themselves as such. Nor is there anything stopping a straight White male from self-identifying as a disabled native woman. So what we have are not only inaccurate statistics, but we don’t even know how inaccurate they are.

So, what to do with inaccurate and unusable data? Use it in a study to show how put upon these EE groups are, of course. For reasons unknown, two such studies were commissioned by the Public Service Commission and have now been carefully hidden away, accessible only to those who know they exist and where to look for them. A rather old press release announces the release of these two studies2 but almost all traces of them have since been scrubbed from the internet. As a former government employee, I can share them with you,3 but don’t worry about reading them4 because they can be easily summarized: blah blah blah inaccurate data, blah blah blah, incomprehensible math, blah blah blah, everyone else has it worse than you. In other words, results aren’t important when you manipulate bad data and obfuscate the results in bureaucratic language. Garbage in, garbage out.

Trust Me, I’m With The Government

It usually goes without saying that when you do a data-based analysis it must be replicable, meaning that if you give the same data to another researcher he should be able to obtain the same or similar results. But the government gets around this inconvenience by not making the data available, claiming ‘confidentiality.’

So what else can you use useless data for? Well, how about another study. This study, however, seems to have reached peak-incomprehensibility; our source tells us that after three years of work it has been indefinitely shelved because it has finally dawned on a few select individuals that taking data that shows women make more than men (in the civil service) and putting it through a mathematical meat grinder so that you can ‘prove’ the opposite may at last be going too far.

Now some of our own math. The last mentioned (unpublished) study took 4 people almost 3 years. At an average salary of $100,000 we are looking at $1 million. The other studies took 3 people about 2 years, so that is another $500,000 for a total of $1.5 million as a conservative estimate. This is just for the salaries; add in a few tens of thousands to friends ‘consultants’ and you still end up at $1.5 million (so it doesn’t really matter, right?). And this is just the cost of three studies by one department (the Public Service Commission), which is only the tip of the iceberg. Read on.

Does It Ever End? The government has created for itself an entire Employment Equity industry. Besides the Public Service Commission, three other departments are involved in this fiasco: Employment and Social Development Canada, the Canadian Human Rights Commission, and the Treasury Board of Canada Secretariat. Those of you with the stomach to do so may peruse the Treasury Board Secretariat’s 24th Annual Report to Parliament on Employment Equity in the Public Service of Canada. Trigger warning: you will be reading bureaucratic Newspeak such as

…fostering an inclusive and respectful workplace…

And learning about committees such as

And what about this bureaucratic gem:

During the 2015 to 2016 fiscal year, the Joint Employment Equity Committee spent time redefining its mandate. Under the redefined mandate, set to be released in the 2016 to 2017 fiscal year, the Committee will focus its work on establishing employment equity and diversity as a cultural cornerstone within the federal public service. The Committee also provided input into the Public Service Employee Survey and on a new direction in staffing, which is the Public Service Commission of Canada’s revised Appointment Delegation and Accountability Instrument. It also diligently worked on developing an Employment Equity Flow Chart, which will map the lay of the land for employment equity in the federal public service.

Remember, these committees are not composed of low level civil servants, but senior executives ($150,000++ salaries). I don’t even want to think about how many millions of dollars are contained within the above paragraph. That “Employment Equity Flow Chart” alone probably cost several hundred thousand dollars. But hey, it’s only your tax dollars, and at least we now have a map of the lay of the land. Or do we? The text only says the Committee “worked on developing” the flow chart, and that it “will” (future tense) map the lay of the land. It didn’t actually say the flow chart was completed and the lay of the land was mapped.

What else have your tax dollars accomplished?

Great! Mission accomplished, we can all go home now, right? Nope, because what would these senior executives do then, when their only ‘talent’ is “redefining [a] mandate” and “diligently” developing a flow chart?

…but more can be done. … [E]mployment equity analysis should go beyond general representation rates to uncover and address gaps in specific areas.

In other words, more studies. Great. And while you’re at it why not throw in a Task Force while you’re shopping with my money?

The decision to create a Joint Union/Management Task Force on Diversity and Inclusion was made in January 2016. This Task Force will:

That’s right dear taxpayer, you will be paying a Task Force to “define diversity and inclusion” and “recommend a framework.” No doubt it will be worth every dollar…

What Can You Do?

Email Scott Brison (scott.brison@parl.gc.ca), President of the Treasury Board, and email your MP. Here is an email that can be copied and pasted:

I was disappointed to read the Treasury Board Secretariat’s 24th Annual Report to Parliament on Employment Equity in the Public Service of Canada.

I believe there should be fewer “Champions and Chairs Committees,” fewer “Joint Union/Management Task Forces on Diversity and Inclusion” and more honest work in our Civil Service.

I believe the size of the civil service should be significantly reduced from its current level of 180,000 and its quality increased.