The Milan March For Open Borders 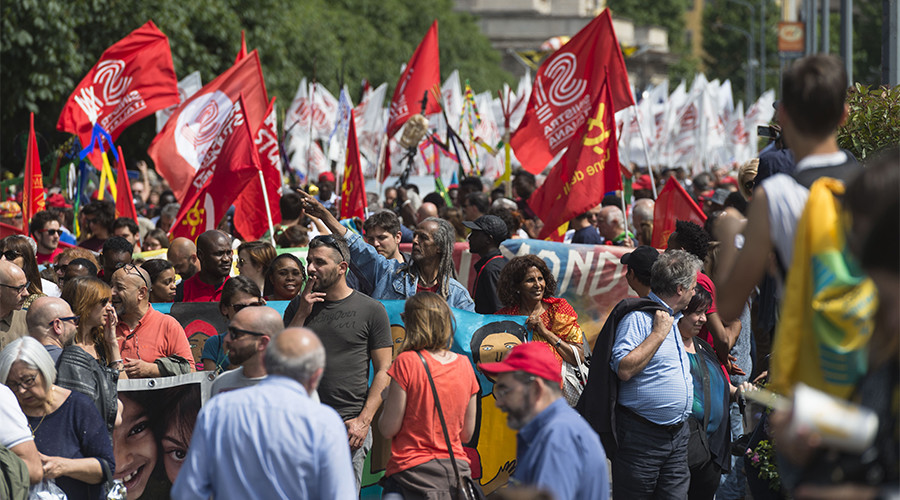 Milan, which is Italy’s financial and economic hub, is now very much like any other major global city: blandly cosmopolitan, deracinated and geared towards nouveau riche tourists. In the December 2016 referendum the affluent Lombard capital was one of the very few places in which a majority voted in favour of the centre-left government’s constitutional reform proposals. Like London and indeed many other cities, Milan seems disconnected from the rest of the country and losing its indigenous character and charm.

It was thus fitting that on May 20 thousands of snobby liberals, carpetbaggers, hypocrites and their third world foot soldiers marched in downtown Milan to demand rights for migrants, social inclusion and a world without walls. A list of the individuals and organisations taking part or backing the event is a veritable rogues’ gallery of Italy’s globalist pro-mass immigration establishment.

Caught between his party’s blue collar voters and its liberal metropolitan wing, Sala initially could not decide whether to attend the march as a private individual or in an official capacity as mayor of Milan. In the end he donned his tricolour sash and showed up as mayor. After all, without cheap migrant labour who else is going to mind the kids of his well-off liberal metro voters and clean their apartments for a pittance? Heaven forbid, with strict immigration controls they would have to pay a couple more Euros more an hour to get an Italian to do it. Interestingly, Partito Democratico leader and former Premier Renzi was apparently in Milan but did not attend the march.

Radical leader and former foreign secretary Emma Bonino went into politics in the 1970’s as a pro-choice activist and images of her apparently performing abortions with a bicycle pump have emerged on the internet. She reportedly admitted conducting thousands of illegal abortions a year until the practice was legalised in 1974. Now she wants Africans to come in replacement for the thousands of Italian babies she aborted. A laudatory article published by the FT in April 2017 fails to mention any of these activities. It will also come as no surprise that Bonino is a member of George Soros’ Global Board of the “Open Society Foundations.” The speculator’s influence on the Italian political class over recent decades is worthy of greater attention than it receives from the mainstream media.

Of Course, A Rich Left-wing Celebrity…

No trendy leftie march is complete without a rich celebrity telling everyone else how to think and this event was no exception. Actor, comedian and sanctimonious loudmouth Claudio Bisio lent his support to demonstrate what a caring progressive he is. Reputed to earn millions of euros a year perhaps he could put up a few asylum seekers in one of his many houses and apartments all over Italy?

Countless NGOs gave their backing to the march: Emergency, OIM, Welcome Refugees, UNICEF, Action Aid along with countless other organisations and groups, including Islamic centres. One suspects that many of those present were from the leftist and Catholic cooperatives that receive state handouts to run refugee centres that cost the Italian taxpayer so dear.

He is a catholic priest who heads Casa della Carità (House of Charity) of Milan who gained notoriety in 2013 for going on hunger strike to demand that a Roma gypsy convicted of street begging with a minor (her daughter) be released from prison and pay a fine rather than serve out her sentence. The leader of the anti-mass immigration party Lega Nord Matteo Salvini commented that Don Colmegna should go on hunger strike for the mothers and grandmothers robbed and attacked every day by gypsies in Milan.

“A Love Unique On The Planet”

Everywhere the left believes it holds the moral high ground on the immigration question but in Italy they really have plunged to new depths of sanctimonious idiocy. The day after the march BresciaOggi, a top daily newspaper in nearby Brescia commented (the translation is mine):

Italians see a Europe which has delegated to us the task of comforting the pain of the universe. And the fact that we do it with courage, competence and at times a love that is unique on the planet does not exempt other Europeans from the obligation to give us a hand rather than praising our loneliness in the Mediterranean.

Outside The Liberal Bubble

Conspicuous by their absence from the march were ordinary Italians. Indeed, even the most cursory glance at images of the march shows a mass of migrants guided and led by their Italian handlers. But why would long suffering ordinary Italians show up to such an event? Just two days before the event terrified commuters passing through Milan Central Station witnessed an ISIS sympathising knifeman attack policeman and soldiers who were conducting ID checks. Two weeks before that dozens of migrants at the station surrounded police officers as a drugged up African tried to seize their weapons.

Milan now also faces gang warfare and crime involving MS13 and 18th Street Gang, which are thought to have thousands of members in Italy. Further, according to a report published last November by Confcommercio (the Confederation of Business and the Self-Employed) crime rates in northern Italy are now higher than in the poverty stricken south. Legal immigrants are twice as likely to offend as Italians and the crime rate amongst illegal immigrants is now above 50%. Public disquiet is palpable but bishops in their palaces, politicos protected by police escorts and rich celebrities in their walled villas do not concern themselves with the whining of ignorant Hickville deplorables.

The march also comes after Italian police made 68 arrests in Calabria, southern Italy, in relation to mafia association, embezzlement and fraud in the supply of public services. The suspects include alleged members of the Arena clan of the ‘Ndrangheta (the Calabrian mafia), the head of the local Roman Catholic Confraternità della Misericordia (Confraternity of Compassion) and a parish priest. Their management of the refugee centre in Isola Capo Rizzuto, the second largest in Europe, reportedly earned them 100 million euros (around 150 million Canadian dollars) of public money over a ten year period. One of the individuals indicted in another mafia corruption case involving migrants in Rome said revealingly:

You earn more on immigrants than drug trafficking.