Century Initiative: Make Canada a “Global Nation” through a Massive Increase in Immigration 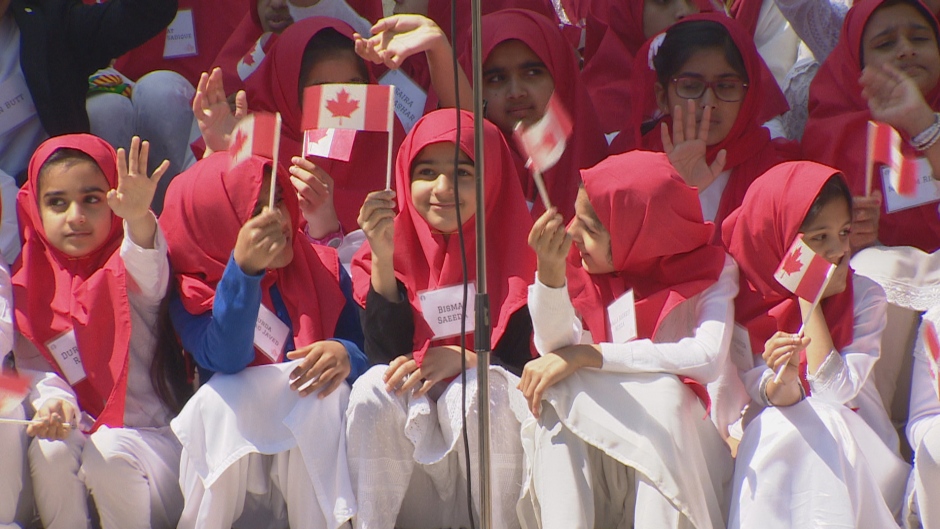 Check this out: in 2016 Century Initiative (CI) was started by a group of corporate managers (with the assistance of academics, journalists, Muslims and feminists) solely for the purpose of bringing about a 50-per-cent hike in immigration to Canada (from the current annual level of 300,000 to 450,000) by 2100. CI is calling for a “permanent” increase until the end of this century with the “goal” of “transforming” Canada into a “global nation” of 100 million inhabitants “unified by diversity and prosperity.”

We must not underestimate the power of CI in pushing through this goal, or at least persuading Canadians that their country must be totally diversified. The founders of CI are members of the global business elite, and their associates are well established in the media, in the three main political parties, and in the conformist academic world, which should not be surprising since CI is merely pushing for the intensification of the already established ideology of immigrant multiculturalism.

In a series of upcoming articles, I will be dissecting and exposing the many unfounded, poorly researched, and deceptive arguments employed by CI to manipulate “ordinary” Canadians into believing that their nation was never good enough and will decline irreversibly if the doors are not totally opened to third world mass immigration.

First, a few words about two of the main characters behind this plan to destroy Canada’s European heritage.

One key founder of CI is Dominic Barton, director of McKinsey & Co, considered “the most prestigious” worldwide management consulting firm. This firm is dedicated to the nullification of national identities to create generic humans with no identity other than the “lifestyles” they purchase in global stores. McKinsey’s alumni have been appointed as CEOs or high-level executives at Google, American Express, IBM, Westinghouse Electric, Sears, AT&T, PepsiCo, and Enron. Rajat Gupta, the first non-American-born partner to be elected as the firm’s managing director, was convicted in 2010 of insider trading.

Barton is best described as a globalist, not a Canadian. He has spent most of his business life outside Canada as McKinsey’s Chairman in Asia from 2004-09, based in Shanghai, and in Korea from 2000-04. Among his titles, he is currently the chair of the Seoul International Business Advisory Council, a trustee of the Brookings Institution, and an adjunct professor at Tsinghua University in Beijing.

We should not confuse globalism with globalization. Globalization is a factual account about the accelerating interactions of nations since the discovery of the New World and the creation of international markets, shipping and railway communications networks. Globalism is an ideology that advocates open borders, mass immigration, and the liquidation of (Western) national identities.

Barton wittingly promotes this confusion from the opening salvo of his justification for permanently high levels of immigration. He says that increasing Canada’s population to 100 million via immigration is the only way “to counteract challenges associated with our aging population.”

If Canada’s population continues to grow at its current rate — 1.2 percent per year — we will see a significant decline in our productivity growth as we have less people participating in the workforce. We will become a nation of about 53 million people by 2100, outside the top 50 countries in the world by population. As our population relative to the rest of the world shrinks, so will our economic prospects and influence in global affairs.

He admits that “the challenges that Japan faces from its aging population are even more dramatic than Canada’s.”

Coupled with Japan’s low birthrate, based on current trends, the size of their workforce will be nearly cut in half in the next fifty years.

Which should lead any reasonable person to ask: Why is Japan’s leadership looking for solutions that do not entail any change in the country’s zero immigration policy? Answer: Japan’s leaders are not interested in destroying the nation of Japan. They are for globalization, not for globalism.

The Japanese leadership is calling for a boost in the birthrate of Japanese women, “by pledging more public support for households raising children and increasing welfare facilities to eliminate instances of family members quitting jobs to care for elderly relatives.”

Why the double standard, Barton, why do you identify Canadians who are against massive immigration as “xenophobic and racist” while praising the Japanese leadership for their pro-Japanese ethnic-oriented plans?

It gets worse than this. CI does call for support for family leave policy, a national daycare system; however, there is nothing in their program about encouraging Canadian women to have more children; rather, the wording is that this is “especially important for new arrivals who may not have the same access to childcare options” as Eurocanadian women. In other words, the aim is to create a national daycare system for immigrants, as a way of encouraging immigrants to have children in Canada!

Another founder of Century Initiative is Goldy Hyder, President and CEO of Hill + Knowlton Strategies. Hyder is a Muslim linked with the Association of Progressive Muslims of Canada. He was the Keynote Speaker at the 20th Annual Parliament Hill Eid-ul-Adha Celebrations in 2014. The basic message of his speech was that the “true Muslim faith is based on the values of peace, equality, respect and understanding — but that is not the message being shared with Canadians.” The “Muslim community are not doing enough to paint a positive picture” of Islam to combat the “distorted image we see on television.”

Hyder never explains why it is “distorted” to inform Canadians that Muslim immigrants have been responsible for almost all the terrorist attacks in Europe. Here is a list of Islamic terror attacks in “non-Muslim” Europe since 9/11. He does not tell us either what’s so distorting about informing Europeans that Muslim migrants have been responsible for a rape epidemic across Europe. The fact is that, contrary to Hyder’s claim, the Canadian media has been suppressing data about the thousands of rapes and hundreds of thousands of crimes committed by Muslim migrants in the last few years across Europe. (See below for more links on Muslim criminality in Europe).

Let it be known that the Association of Progressive Muslims of Canada has interesting ties to big donations from the embassies of Saudi Arabia and Iran.

Hyder, in a rather odd, but very revealing, article published in The Globe and Mail on January 16, 2017, complained against the use of the word “elitist” on the grounds that this word inculcates Canadians

to be inherently distrustful of experts, to presume that a person is less ethical because they have a higher or lower net worth, or to believe that those with global outlooks aren’t patriotic.

The globalist elitist Hyder also complained that this term “risks creating an ‘us versus them'” psychology that discourages ordinary Canadians, get this, from being “inclusive” of global millionaires!

This is the state of pathological thinking that now permeates the left-corporate alliance. Ordinary, lower income, Canadians who suffer from the importation of cheap labour and the degradation of their heritage are now the perpetrators of exclusionary labels.

Speaking of mistrust, in upcoming articles about the Century Initiative, I will make it amply clear why ordinary Canadians should mistrust elitists like Hyder. I will demonstrate that almost all the economic, demographic, historical, and ethical claims made by CI cannot be trusted one bit, but should be seen for what they are: a globalist effort to transform Canada into a mere shopping mall without any national identity that is uniquely Canadian, but simply a place like all the other European nations where the same mass immigration globalist agenda is being pushed without democratic debate but enforced with extremely deceptive, “us versus them” labels about “racists” and “xenophobes” against ordinary indigenous Europeans.

Muslim Sexual Assaults, Terrorism, and Criminality in the West