Islamization of Canada — Without a Counter-Reaction 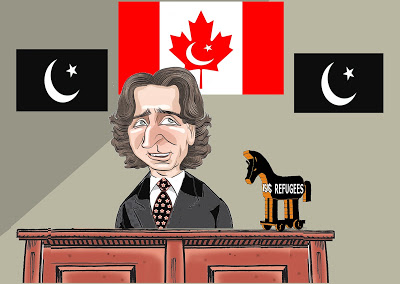 Globalists such as Justin Trudeau would like to fill the West with people who will help to create a vast dictatorship, where the main population consists of uneducated people accustomed to autocracy, and where the dissidents are reduced in numbers, taught to be ashamed of their own culture, and brainwashed into a belief in what is euphemistically called multiculturalism. Ultimately this so-called multiculturalism means a world of no culture at all — a world of no values, no pride, no self-respect, no past, and no future, only obedience.

Tens of thousands of “Syrian refugees” have already been brought into Canada by Trudeau, and many more will be coming. Most do not speak English, most are not employable, and most are Muslim. And why is no Muslim country willing to take these people?

Canada already has serious problems of unemployment and poverty, and our health-care system is rated 30th by the World Health Organization, yet Trudeau spends vast amounts of money on such questionable issues as his so-called humanitarianism — more accurately referred to as “grabbing the ethnic vote.” The total expected cost of bringing in these Syrians is said to be about a billion dollars, though the real figure may be considerably more than that. And of course Syrians are not the only Muslims coming into Canada.

Canada has the world’s highest overall rate of immigration. It also has the world’s fastest growing Muslim population. Yet most of Canada is barren land, not suitable for further growth in population of any sort.

Attacks by Muslims on the inhabitants of Western countries, including Canada, have been frequent and violent for years, and many innocent people have been murdered. The politicians and the news-media obscure the issues by referring to the attackers as “terrorists.” They are not just “terrorists,” they are, quite specifically, Muslims.

It is also highly misleading to say there are “good” Muslims and “bad” Muslims. Muslims have spent 14 centuries trying to conquer the West, as they were ordered to do by their prophet Mohammed. Much of the Koran, the Muslim holy book, is devoted to telling the faithful, in quite violent language, that they must conquer the “infidels.” Muslims are even cruel to one another: every year, about 20,000 Muslim women are victims of “honor killings” — murdered by their own families.

I’ve read the Koran from cover to cover twice over the years. The biggest problem is the boredom factor — how to stay awake through it all. Well, admittedly, and thank God (Allah), it’s quite a short book. But the violence and sheer nastiness of the book is something that people need to know about.

Islam has nearly always been “spread by the sword.” The slave trade, throughout the Middle East and Europe, was very much dominated by Muslims for centuries. Muslim treatment of women has always been atrocious. Individual Muslim empires, such as that of the Ottomans, were famous for their cruelty. And so on.

Disinformation is a fascinating but malignant form of psychological warfare. It is said to have been perfected by the KGB, and it is also commonly used by cultural Marxists. Disinformation, as a political tactic, is now as common as tying one’s shoes. The basic process is to take a genuine fact, and then to tweak (twist) it, just a tiny bit, not too noticeably, but enough to produce the desire effect.

One thing I’ve noticed about most Canadians, unfortunately, is that they’ll talk for hours nonstop about all the ways we should change the world — but as soon as you ask them to do something tangible, they give you a silly grin, then get red-faced and sweaty and tell you they’re going to be rather busy sorting out their socks and underwear.

Forming a political group of an appropriate sort would be a start — a very small start. But it would have to be a group that actually sits down at a real table and drinks real coffee, instead of just sending email back and forth. One catch is that, except in big cities, we’re all so dispersed as Canadians — across 10 million square kilometres. A bigger catch is that Canadians can never agree on anything.

As the darkness descends, the main liveable parts of Canada will be parts of the Prairies, and parts of the Maritimes. My favourite Maritime province is Newfoundland. It’s possible to drive there for hours without seeing another human being. I still might end up there. I may not see many humans, but no Muslims as well. It’s unfortunate I got into a disagreement by email with the owners of a B&B over the entry of Muslims into Newfoundland, so that I might not be welcome anymore in that particular town.

I was shocked when, beginning in 2015, Angela Merkel started letting over a million Muslims into Germany. I had a German woman friend there, an accountant, and she couldn’t understand why Merkel bothered me. I finally realized that my friend was quite excited about the idea of a united (borderless) Europe and all the great business it would bring in. I still have German friends, but I crossed her off my list.

But at least Germany has PEGIDA, the Identitarian Movement and Alternative für Deutschland, in spite of all the strict “anti-Nazi” laws, so I don’t know what to say about my fellow Canadians. Canada may well be the one nation that will welcome the dissolution of its historical identity, coupled with Islamization, without a fight other than grumblings by Eurocanadians about how bad things are getting.