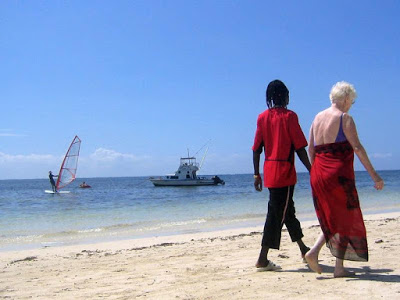 Recently, CBC “Doc Zone” featured a story about female sex tourism in Cuba. An estimated one in four women (a great many Canadian it seems) who travel to Cuba are in the hunt for “the Cuban experience,” and there is a veritable industry of predominately Black and mulatto gigolos in the hunt for them. The racial profile of these predators is interesting because according to the Cuban census, about 65% of Cubans are White, and only about 9% are Black. It seems that Cuban men “of colour” have a superior talent for this kind of work, and an abundance of time to hone their skills as maestros of charm.

The documentary illustrated the issue by focusing on three women and the Cubans who deceived them. One was a wrinkly, blue-eyed, blonde-haired, retired professional from San Diego who persuaded herself that a Cuban Black man 40 years her junior sincerely loved her, and after tasting the fruit through enumerable physical encounters, married him and gave $10,000 US to his mother to renovate her miserable Havana home. The story ended with his coming to America. Who knows. Maybe they were meant for each other. Yeah sure they were.

The second odd couple consisted of a Women’s Studies Professor at the University of Saskatchewan and a younger mulatto with an Afro hair-do named “Andy.” In tandem with testimonies from other women in the documentary, she justified her sexual escapades in Cuba by saying that Cuban men were charming and “uninhibited.” The inference being that White Anglo men are “repressed” and non-attentive. The good professor returned home pregnant, and “Andy” followed. It was obvious that he would find Saskatchewan a little disorientating to say the least. Once again, viewers are left with little confidence in the relationship’s durability. Andy announced that “I will always be a Cuban.”

The third case involved a Quebecois lady “Claire” and a big muscular Black Cuban by the name of “Ricardo.” Ricardo played his cards right by not coming on too strong at first. Claire was taken by his apparent shyness, which she interpreted as respect. Again the relationship followed the standard sequence: Dates –> sex –> simulated romance –> marriage –> emigration. Trouble was, as soon as Ricardo came to Montreal and settled in, he suddenly became “cold,” until one day he was gone and Claire found his note on the table. “Here are the keys.” This story is so common that the government requires that dupes like Claire reimburse taxpayers for the welfare payments that these con men receive while in Canada. An estimated 25% of foreign marriages are fraudulent.

For its part, the Cuban government is doing its best to crack down on the gigolo industry. Cuban men seen to be too intimate with foreign women are asked for ID and arrested if they appear to be predators. Why does the Cuban government do this? Two reasons I think. One reason is that tourist dollars are vital to their economy and they don’t want Cuba to carry this reputation as a trap for stupid and morally depraved foreign women. The other reason is that the Castro regime has boasted that severely curtailing porn, prostitution and gambling was a major achievement of the revolution.

I have long wondered about the apparent attraction that White women, particularly blondes, have for Black men. Is it cultural or genetic? Is there a built-in selective evolutionary advantage in seeking out others with different genes? A recent study concluded that the opposite is true. Opposites do not attract. Couples tend to marry those with similar DNA (cf. journal Proceedings of the National Academy of Sciences). So then we must look for cultural reasons.

One striking feature of ‘progressive’ society these days is that many people make it a point to adopt a non-White child recruited from a foreign land. This despite the fact that there are, according to one estimate, 36,000 children in Canada needing adoption. Is this a classic case of pathological altruism? No doubt. But since political correctness can be defined as status-seeking, I think these people are making a statement. “See, I am so colour-blind, so liberal, so tolerant, so enlightened, that I have adopted a Black/Asian/native child.” The other reason is sheer exhibitionism. They are like the people I saw walking down the streets of Kitsilano with a ferret on leash. “Look at me!”

As for Blacks, according to one poll I read of, 68% of White Cubans think Blacks are “devoid of decency.” A surprising sentiment in a socialist ‘utopia’ where racism is allegedly absent. But it is not about race. It’s about culture, and Black culture comes with a reputation.

Let’s put it this way, when one thinks of sexual “repression,” Blacks and mestizos don’t come to mind. I don’t think John Calvin would have made any inroads in Brazil, Jamaica or Cuba. Carpe diem does not mesh with the Protestant work ethic.

And what about those ‘White’ women? In recent decades, I have seen something that seldom if ever happened in the 50s and 60s, even in Vancouver. Married women in their late 40s and 50s will go off on a tropical vacation together — no family encumbrances. Just the ‘girls’ going off together for a little bit of fun. I will leave it up to your imagination concerning what that ‘fun’ probably entails. Nothing like bringing home a few STDs for the old man, eh?

That’s the beauty of the Sexual Revolution and Women’s Liberation. Women now can be just as degenerate as men — especially in the age of global travel and the Internet. Sex tourism is now an equal opportunity sport where professional women flush with cash can pour off the plane in various Caribbean tourist destinations in pursuit of a sexual adventure and find it in young virile, charismatic men on the prowl, looking for a meal ticket or a visa to the promised land up north.

Of course, the holiday sex trade is not exclusive to North American female tourists and Cuban or West Indian gigolos. British and European women are travelling to Spain, Greece and Africa for hook-ups, and the results are often tragic. As one German observer remarked,

There are a number of names given to the sexual transactions the young local men are engaging in. In Gambia, on the West African coast, the Black gigolos are referred to as “bumsters” and the European females as “White Gold,” a rather unflattering but brutally honest designation. In the Maghreb, female sex tourism is aptly called “bezness,” an Arabic corruption of the term “business.”1

The list of European bezness victims is endless; the largest German self-help forum, 1001 Geschichte (1001 Stories), which recounts the negative experience of duped, mostly female German tourists, ranked at one point among the 6,000 most visited websites in Berlin…

Sharing their story of how they were played by African men who treated them as cash-cows or useful idiots for gaining residency in Germany is, even under a pseudonym, often associated with feelings of shame and personal failure for the victims. And they cannot count on the understanding of their liberal compatriots. For do-gooders the women display exactly the kind of closet racism which needs to be weeded out in Western society.

Perhaps then, many female sex tourists should be more pitied than judged. They are victims not only of their libidos but of their stupidity.

[1] In German the term is also interpreted as a portmanteau of Beziehung (relationship) and Business.