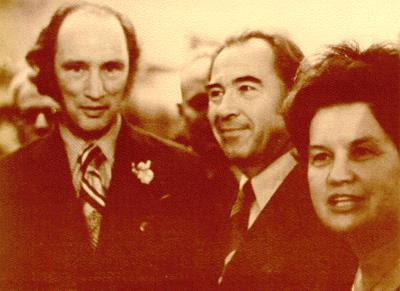 Among current efforts to explain Pierre Trudeau’s adoption of multiculturalism we have the following claims:

What is missing here is Trudeau’s determination to weaken the cultural domination WASP Canadians had over the national identity of Canada. In rejecting the “biculturalism” recommended by the Royal Commission, and announcing in October 1971 that Canada’s official identity was multicultural, Trudeau was rejecting both the French Canadian claim that they had a collective right to a unique nation, and the English Canadian identification of the rest of Canada with “Anglo culture.”

Coming to intellectual maturity in the late 1940s and 1950s, Trudeau absorbed the strong animus in Western societies against the racial nationalism of Germany, and, by extension, against any form of nationalism. In their biography, Trudeau and Our Times, Vol. 1: The Magnificent Obsession (1990), Stephen Clarkson and Christina McCall sum up well his anti-nationalism:

For him, nationalism was historically regressive, a force that was reprehensible for the worst wars in history. It was unacceptable, in his view, to exalt collective political claims at the cost of individual human rights (p. 82).

Clarkson and McCall, however, limit their understanding of Trudeau’s anti-nationalism to his opposition to French-Canadian nationalism. He certainly directed most of his energies against French nationalists because they were the ones agitating during these days for a separate Quebec, but behind it all, Trudeau’s multicultural vision was also meant to undercut the identification of the Canadian nation state with Anglo-Canadians.

For Trudeau, the atrocities of the Second World War were inherent to the very nature of nationalism itself. The “very idea of the nation state is absurd,” he wrote in possibly his best essay, The New Treason of the Intellectuals, published in Cité Libre in 1962. While Trudeau acknowledged that “nationalism was…the child of liberal democracy and the mystique of equality,” he observed that an inescapable reality in the creation of nation states was the identification of the nation with an ethnic majority to the exclusion of other ethnic groups. This identification resulted in a situation in which minorities would always be striving to carve out their own states against the majority, and indeed against other minorities within their own lands, leading to constant tension and divisions.

Moreover, history had also shown that once nation-states were created, the ideals of freedom and equality tended to be pushed to the side by a state authority claiming to be the sovereign agent in charge of the interests of the nation. In this situation, it was only natural for those leaders with strong nations “to seek to rule over weaker peoples,” in the name of their people.

For Trudeau, this history was apparent in the English conquest of Quebec, and the way the English, “the most nationalist of nationalists,” imposed their “Anglo-Saxon language and customs” on the Quebecois, expecting them to assimilate, treating them with condescension, inventing “all kinds of stratagems by which democracy was made to mean government by the minority” in French speaking lands. Then, as the English grew in numbers, and the rest of Canada became populated with English speakers through immigration laws that “favour[ed] immigrants from the British Isles over those from France,” the English “took to hiding their intolerance behind acts of majority rule,” suppressing “bilingualism in the Manitoba legislature, violating “rights acquired by separate schools in various provinces,” and “savagely” imposing conscription in 1917, and much more.

This aggressive Anglo-Canadian cultural nationalism was responsible for the emergence of French-Canadian nationalism.

Canadians had to make up their minds, according to Trudeau, either accept a Canada incessantly divided by Anglo and French nationalisms, or reject both these two parochial choices and strive instead to make Canada into a “multi-national state.” Much as he understood the historical roots of Quebecois anger against Anglo cultural arrogance, Trudeau condemned French-Canadian nationalism as another form of cultural arrogance bedevilled by similar flaws as Anglo nationalism, “an emotional and prejudiced” movement that would closed-off Quebec from other nationalities, privileged the Quebecois above other ethnic minorities within, and destroy the chance of creating the first democratic “polyethnic” state in Canada.

The conclusion Trudeau reached was that Canadian leaders “must separate once and for all the concepts of state and nation.” The meaning of this statement cannot be underestimated. He meant that no one ethnic group, neither the Anglo in Canada at large or the Quebecois in Quebec, must lay claim over Canada’s cultural identity. Just as religion was separated from the state, so must culture be separated from the state. Canada must be identified as a “polyethnic society” and in this way Canada will truly become a liberal-democratic society.

Trudeau was very vague as to how this polyethnic society would governed itself, other than to say that within a federal government

different regions within the country must be assured of a wide range of local autonomy, such that each national group, with an increasing background of experience in self-government, may be able to develop the body of laws and institutions essential to the fullest expression and development of their national characteristics.

What exactly does it mean to say that “each national group” in Canada (just French and English, or also Aboriginals and other ethnic nationalities?) “must be assured of a wide range of local autonomy,” jurisdictions where they will be able to develop “laws and institutions” “essential to the fullest expression of their national characteristics”? We will see in future parts that to this day no one knows exactly what multiculturalism entails as far as jurisdictional powers and local autonomy are concerned.

The point I like to highlight here is what Trudeau says about Anglo-Canadians, his expectation that

English Canadians, with their own nationalism, will have to retire gracefully to their proper place, consenting to modify their own precious image of what Canada ought to be. If they care to protect and realize their own special ethnic qualities, they should do it within this framework of regional and local autonomy rather than a pan-Canadian one.

We can see why Trudeau’s vision for Canada was inconsistent with the recommendations of the Royal Commission. These recommendations aimed to defuse French Canadian nationalism within a federal Canada that was multiethnic with all Canadians enjoying the same individual rights, and Trudeau could work with that; but not with the notion that Canada was “bicultural.”

It was not only, as many have argued, that Trudeau view Quebec nationalism as a greater collectivist threat to Canada than the commissioners believed it to be. For him both this nationalism and Anglo nationalism would continue to plague Canada if this nation was identified as a bicultural nation consisting of “two dominant cultures.” Although he did not advocate multiculturalism in the early 1960s, he did say that any nation that prioritizes the ethno-culture of the dominant group, and thereby establishes a nationalism that elevates the interests of this group (the French Canadians in Quebec, or the English and the French in Canada) above the interests of minorities, cannot be truly polyethnic and democratic. As he wrote in New Treason of the Intellectuals,

A truly democratic government cannot be nationalist because it must pursue the interest of all its citizens, without prejudice to ethnic origin.

There is no question that in announcing that Canada was “multicultural,” Trudeau was voicing the views of a “multicultural movement” that was already percolating its ideas into the Canadian political discourse, what Lee Blanding has referred to as a “loosely organized group of activists who pushed the Federal Government to recognize that Canada was ‘multicultural,’ rather than ‘bicultural,’ between 1960 and 1971,” with Ukrainian Canadians acting as “the driving force behind [this] multicultural movement.” While it is difficult to detect a coherent ideology from this movement, it would not be off the mark to say that during the 1960s certain members of the Canadian intellectual elite were of the view that a Canada that privileged the two “founding peoples” was a Canada that saw other ethnic groups as less Canadian, a Canada that underestimated the contributions of other ethnic groups, and a Canada that was no longer accurately describing the multiethnic character of the nation.

Trudeau was voicing these ideas, using the term “polyethnic,” in a more intellectually developed manner already in the early 1960s, and then in a more politically direct way as the Prime Minister in 1971, when he responded to the Royal Commission that “biculturalism does not properly describe our society; multiculturalism is more accurate.” (Hugh Donald Forbes, “Trudeau as the First Theorist of Canadian Multiculturalism,” in Stephen Tierney, Multiculturalism and the Canadian Constitution, UBC Press, 2007, p. 30). In calling Canada a multicultural state, he was saying that the Canadian nation should not be identified with the culture of either the English or the French ethnic group. Beyond the official languages of English and French, Canada should be seen as a nation based on liberal-democratic values, rather than as a nation founded and dominated by the cultural values and traditions of English Canadians and French Canadians.

The contributions of “other ethnic groups” would not just be acknowledged; Canada would henceforth ceased to identify itself as an Anglo nation, and Quebec too would be encouraged to see itself as culturally diverse. Trudeau’s point was not that multiple cultures would compete to claim Canada’s identity or to claim territories within Canada as theirs. It was that individuals would be free to choose their cultural identity; the only expectation on the part of the government would be to ensure that all Canadians learned the official languages and accept the values of multicultural liberalism. There would be two official languages but no official culture and therefore no privileging of the culture of any ethnic group.

Although he never defined the terms, the meanings of ethnic, cultural, and civic nationalism, and to this day no one has adequately drawn any distinctions between these terms in relation to Trudeau’s writings and policies, it can be safely stated that he envisioned a Canada that was based on civic values, not values associated with the culture of a particular people, but political values deemed to be universal and acceptable by all humans regardless of race and religion.

Trudeau thus pushed the spiral beyond a rejection of the ethnic nationalism already rejected in the Immigration Regulations of 1962/67. Not only race (the “White man’s country” of the pre-WWII years) and ethnicity (Canada is a British/Quebecois nation) would be separated from the concept of the political, from the identity of the nation, so would culture (Canada is a nation populated by people with a shared French and Anglo culture).

This constituted a further breakdown in the concept of the political in Canada, since the political hinges fundamentally on a sense of grouping by a people claiming a territorial state as their homeland on grounds of ethnic and cultural ancestry. The only remaining concept of the political was a liberal ideas-based conception. Canada would henceforth be a nation with a core constitutional identity, official languages, coupled with certain holidays, symbols, and institutional procedures.

And yet the spiral would not stop but would gain more momentum in the coming years.