Council of European Canadians Is Not a “White Supremacist” Group 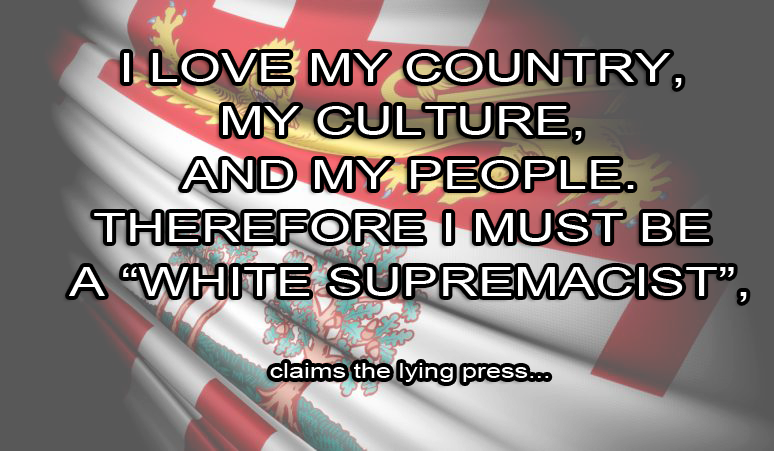 In the last two days, the lying media in Canada, in unison with conservative candidate Michael Chong, and political consultant Warren Kinsella, have referred to the Council of European Canadians as a “white supremacist” group. This is a term increasingly used by the left and right wing establishment to condemn ideas and groups it cannot handle through open debate, empirical use of facts, and logically constructed arguments.

Having diminished the impact of the word “racist” through nauseous overuse, the establishment has now decided to double down with an even more extremist term which they cannot even define.

For the record, the Council of European Canadians is not a “white supremacist” organization, has never called itself as such and does not believe in the supremacy of any racial group over any other. What it does believe is:

This label was first used by Michael Chong in the Conservative leadership debate in Moncton this past Tuesday evening. Speaking of Leitch’s team, Chong said:

They insist that it’s not race-baiting or anti-immigrant, but just yesterday, their campaign was endorsed by a white supremacist group called the Council of European Canadians.

This statement is wrong on all counts; in its designation of CEC as “white supremacist,” in its extremist claim that CEC is “anti-immigrant,” and in its false claim that CEC endorsed Leitch’s candidacy.

Frank Hilliard did write an article for CEC arguing that, however imperfect Leitch may be, she deserved serious attention as a candidate expressing views congenial with the views of some of the CEC writers and many of the readers of our webzine. The things Hilliard found attractive about Leitch are aligned with what millions of Canadians also like about her: she is very qualified to be Prime Minister, certainly far more qualified than Justin; she is “pro-life,” her policies would “screen out Islamist terrorists,” “put a pause on Muslim immigration very similar to the new policy in the United States.”

Althia Raj, in the Huffington Post Canada, placed Chong’s statement with a video at the center of her story and then went further calling Frank Hilliard a “white supremacist” without any evidence. Raj is obviously the quintessential conformist who uses whatever words the establishment requires journalists to use without even knowing what they mean. Had Raj been interested in learning about racial supremacism, she might have told her readers about India, the most racist country in the world with an institutionalized system of apartheid against darker Indians, with whiter Indians who look like Raj, standing at the top of the caste ranking.

The top racist countries in the world are in the Third World. We Eurocanadians have every reason to be wary of million upon millions of immigrants coming from racist countries. This reality is posing an enormous threat to our anti-racist Canadian values, which we at CEC endorse.

Warren Kinsella, who has managed a career out of using extremely juvenile labels against Canadians who think differently from him, and has a blog called “The War Room” which reads as if it were “The Cuck Room,” makes the incredibly stupid statement that the Council of European Canadians believes that non-White immigrants are not human, even though half of our writers are immigrants, and some are not White.

But rather than waste time with a self-absorbed mediocrity who writes in the third person, and always employs labels as substitutes for arguments, referring to CEC in a few lines as “racist,” “far-Right,” “neo-Nazi,” “Stormfront,” “Ku Klux Klan,” let us close here with some empirical polling evidence showing that Canadians do welcome Leitch’s (and Trump’s) immigration proposals, in tandem with the views of the Council of European Canadians:

This is what CEC is all about; evidence, historical accuracy, decency, honor for our forefathers, scholarly debate and expression of liberal democratic values.