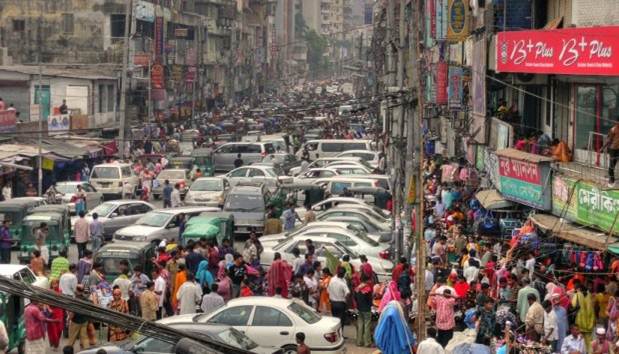 India expects to jump from 1.252 billion to 1.55 billion crammed humans within 34 years. It adds 16 million, net gain, annually. Today, Indians flood into America with chain-migration and added birth rates. Indians do not believe in birth control. As Indian’s population grows, its human misery index explodes off the charts, and ever more Indians migrate to European lands for better living standards. Let’s take a look at what ramifications we face from immigration from India.

India’s major river, the Ganges, which I once rafted, flows into the ocean with the most polluted, toxic and contaminated waters known to humankind. It features trillions of gallons of untreated sewage, industrial waste, hundreds of chemicals and millions of pieces of plastics — that flow into the ocean 24/7. That watery, chemicalized conveyer belt creates a 20,000 square mile dead zone at the mouth of the Ganges. Once it hits the Indian Ocean, those contaminated waters spread all over the planet — poisoning marine life, avian life, reefs, the ocean floor and cause deadly acidification throughout the planet.

Of note, the USA, China and India dump the most plastics into the world’s oceans. Latest estimates show 5.25 trillion pieces of plastic float above and flow under the surface around the world — killing millions of marine creatures annually. As per investigations by marine biologist Julia Whitty, 46,000 pieces of plastic trash float on every square mile of Earth’s oceans. In a word: sickening! Why? Because we’ve known this for 20 years, but no action to stop it by creating incentive-driven deposit-return laws internationally.

Within India, hundreds of millions of people lack a toilet. Therefore, they defecate-urinate on the land daily. In fact, the Indian Express said, “Best experts tell us that 60.4 percent of Indians lack a toilet.” As you can imagine, the stench in the cities, the filth in the streets and the total contamination of soils and rivers by that many people injecting their waste upon the lands and waters 24/7 — cannot be comprehended.

Thus, everyday of the year, 1,000 Indian children under the age of 12 die of dysentery, diarrhea and other waterborne diseases die from drinking contaminated water.

Yet, as India’s population accelerates by 16 million net gain annually, they grow so fast, they cannot solve any of their problems. Disease and squalor top the “human misery index” beyond the concepts of the American people.

You can only imagine that India cannot support jobs, classrooms and housing for that many people added annually. Yet, not one word about population stabilization from India’s leaders. At one point, Indira Gandhi attempted to bring birth control to India when I visited in 1984, but she failed because of religious-cultural norms that overpowered reasoned thinking.

If you look at the beauty of the Taj Mahal, one of the most famous landmarks of India, a short trip to the river next to it shows millions of pieces of plastic clogging its waters. And, the water features endless chemical poisons leaving it unfit for human or animal use.

In the cities, air pollution poisons the lungs of everyone breathing that toxic air 24/7. You see everyone tapping into electrical wires illegally at every juncture. You see filth, trash and stench everywhere. When you see the traffic, it’s a free-for-all that confounds and confuses the Western mind. The National Nutritional Monitoring Bureau estimates that only 15 percent of Indians receive adequate nourishment daily.

As can be imagined, because of adding that 16 million more people annually, India’s wilderness suffers encroachment via roads, housing, mining, lumbering and other development. Animal extinction rates soar in India. The Bengal Tiger and the Snow Leopard will not survive in the wilds within several decades. Elephants face an uncertain future. Birds of all kinds face extinction from loss of habitat. Fish and plants vanish as Indians invade and demolish habitat.

With all the realities facing the people of India, no one will raise a finger to address their population predicament. Even in the face of so much human misery, their leaders live in “cognitive dissonance” also known as “intellectual denial of reality.”

Please realize that I am covering the tip of the iceberg in this series. At any time, we may witness horrific outbreaks of cholera and other diseases that will kill millions in Asia.

But what does it mean for all of us in the USA or other western countries like Canada, Europe and Australia?

To be frank, we face a global mess that will ultimately arrive on a big platter forced down our throats. Today, millions of Indians clamor for visas to move to the USA and Canada. The rich ones buy their way into America. Some Indians discovered how to gain loans to buy all the motels across America. They continue accelerated chain-migration with that niche.

By 2050, a scant 34 years from now, India expects to out-populate China to reach 1.55 billion people. As it stands, they lack the ‘arable land’ to grow enough food. They clearly lack clean water as they dry up their ground water supplies.

If you think the refugee crisis facing Europe last year and continuing this year, you haven’t seen anything yet.

When India starts facing hunger crises via lack of arable land, lack of rainfall, and growing ‘catastrophic climate destabilization’ with its 1.252 billion people — we’re all in trouble. Hordes upon hordes of them will push their way into the West, ransacking everything in sight.

Yet no amount of immigration will solve anything for Indians. No amount of international aid will help them. Why? Because they keep growing human numbers beyond any solutions. Instead, Indians will export their demographic plight to the West, along with millions upon millions of Africans thirsting for European lands.