Reclaiming the English Language from the CBC 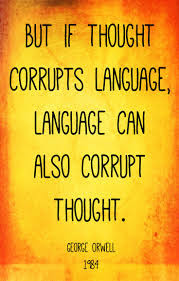 By that token, bilingual or multilingual people have broader vision. It is not what we look at — poverty, injustice, overpopulation, environmental degradation — that is paramount. Rather, it is the linguistic construction built in to filter that reality, to bring it into sharp focus, or make us blind to it.

The question becomes then, whose lens are we wearing? What filter are we looking through? How do we remove it?

In 1984 George Orwell revealed that the purpose of Newspeak, the language of his fictional totalitarian regime, was to rid old English (Oldspeak) of all adjectives and unnecessary words so that people would be not be able to feel or think. If one could not describe sadness, one could not feel it, and if there was no word for democracy or justice one couldn’t complain about the government. By eliminating words, Newspeak would eliminate the range of thoughts.

Lancaster University’s Professor Tony McEnery concluded that computer games and MP3 players have accomplished much the same thing in teenagers. (“Technology Isolation Syndrome”). His 2006 study of speech, blogs and questionnaires found that teenagers used half the average words of 25-34 year olds and that 20 words accounted for a third of their speech. Perfect fodder for Indoctrination University. Pimply students are already dumbed-down before they get there.

It looked for a time that a subtle totalitarian language would emerge from the Human Potential Movement in California in the 1970s. As R. D. Rosen dubbed it, “Psychobabble” was a mode of confession “that confessed nothing” and in its attempt to escape the confining vocabulary of Freudianism it substituted a jargon that had no theoretical roots. But it gave way to a puritanical tsunami that swept over every major institution in the English speaking world. “Political correctness.” It’s objectives are classically Orwellian. The notion is that if we don’t label people or things by conventionally harmful terms, then people will desist from thinking of them in those terms. And if politically acceptable euphemisms are substituted and repeated ad nauseam, the ideological brain-transplant will be completed.

Whilst dangerous, some politically correct neologisms can be quite funny. For example, the homeless can now be termed the “involuntarily undomiciled.” And a drunk can be “a person of differing sobriety,” while a junkie is merely someone with pressing pharmacological preferences. Someone who is untrustworthy is just “ethically disoriented” while a lazy man is only “motivationally deficient.” Someone chronically late is “temporally challenged” and a prostitute is not a streetwalker or hooker but a “sex care provider” presenting themselves as a commodity allotment with a business doctrine. A shoplifter can now be regarded as an “alternative shopper.” As a White man, I am in truth a member of a “mutant albino genetic-recessive global minority,” and the diction I practice is in reality just the style and writing imposed upon the world by “patriarchal white lexicographers.” Standard English is “capitalistic patriarchal hegemonic discourse.” Each vested interest and lobby now seems to have its own “politically correct” euphemisms. The Pentagon were groundbreakers in this respect. A “clean” bomb was a nuclear device or neutron bomb that kills people but leaves infrastructure intact. Civilian deaths could be disguised as “collateral damage.” Assassination is “wet work,” bombs that hit civilians can be described “incontinent ordinance.” Dead soldiers are just “non-operative personnel” or “terminally inconvenienced” or “non-viable.” Bombing an unintended target like a hospital could be dismissed as an “accidental delivery of ordinance equipment.” And military failure, like President Carter’s ill-fated Iranian desert raid, could be termed as an “incomplete success.”

Ministers of Labour, meanwhile, call their union-busting legislation “right to work” laws, and the scabs that are used to break strikes are accorded a more morally sanitized name, “replacement workers.” Trade union officials who haven’t the guts or honesty to tell their membership that they are calling for amnesty for ‘illegal’ workers instead say they wish to “regularize” them. And they are not illegal, they are ‘undocumented’, even though they used forged documents to get into the country. Finance Ministers call the stock market crash “an equity retreat” and warn that we may experience “negative economic growth.” They couldn’t use the word “contraction” if it killed them. Conservation officials call the mass slaughter of wild animals “game management” and the Environment Ministry describes the explosive destruction of a nuclear reactor core like Chernobyl’s as a “core management event.”

The nuclear industry has conducted its own unique detoxification of plain English. An explosion is an “energetic dissembly” and a fire is “rapid oxidation.” Plutonium contamination is “infiltration” and a reactor accident is to be referred to as a “normal aberration.” “Spin” is a new breed of deceit three decades in the making which attempts to effect damage control by the use of euphemisms. And what are euphemisms essentially but a kind of linguistic Demerol to diminish painful truth by re-labeling it. The U.S. Environmental Protection Agency is gifted in that department. They once decided to sanitize their lexicon by banishing the “hazard” because it allegedly triggered panic in the American public. Health “hazards” were not to be mentioned and the Office of Hazardous Emergency Response was re-established as the “Office of Emergency and Remedial Action.” And Enforcement Personnel became the more friendly “Compliance Assistance Officers.”

Not to be outdone, the Obama administration demonstrated its mastery of the high art of verbal whitewashing with its meticulous removal of the word “Islamic” in reference to Islamic or Radical Islamic terror. One must only speak of generic terror, unless of course, it is domestic terror committed by anti-abortionists, White supremacists and the Oklahoma bomber.

But it is in Growthism where language makes it most incursive, dangerous and decisive intervention in the determination of what we perceive to be real today. The ideology that economic and population growth is beneficial, necessary and inevitable prevails, to a large extent, because the language which mediates that message has colonized academic forums, radio and television studios and print media.

Consequently the reality of environmental Armageddon is seen by the audience through rose coloured glasses that are worn by the presenters, their guests and researchers and tinted by the vocabulary they use to interpret that reality. The audience therefore never sees or hears that every economic “boom” is an environmental “bust” and only comes to know “growth” via positive connotations.

For example, when Statistics Canada released its Census Report in mid March of 2007, those localities like British Columbia and Alberta which gained people from the previous census, were anointed census “winners” by the media as if a prize was going to be awarded for more pollution, GHG emissions, congestion, farmland and habitat loss.

Prince Rupert, BC and Saskatchewan, on the other hand, were designated as census “losers” for having fewer people than five years before. Newscasters consistently report that Canada “enjoyed” record growth or that the Maritimes “suffered” a “stagnant” economy with “sluggish” housing starts. The concept that Canadians might “enjoy” a steady state economy that didn’t cover arable land and habitat with subdivisions is foreign to news script writers.

The word “growth” itself has undergone many makeovers in recent years to make it palatable to those of us who wouldn’t swallow it otherwise. Growth has become “managed growth,” “deflected growth,” “smart growth,” and the ultimate oxymoron, “sustainable growth.” It seems that urban planners concoct a new label for the same snake oil every year.

To preserve all those wonderful green spaces that we love, planners propose to cram more and more of us into smaller and smaller urban compartments. After all, Canadian urbanites must move over and squeeze tighter and tighter to make room for all the refugees and Chinese billionaires this country needs to make it more ‘diverse’ and ‘vibrant’. We must remain a “Welcoming” country, the “Home to the World,” and to seal the deal, designate our bulging metropolises as “sanctuary” cities for illegal — oops — ‘undocumented’ visitors. Houdini, aka Vancouver Mayor Gregor Robertson, even claims that we can shoe-horn half the world into Vancouver and make it the world’s “greenest” city at the same time. I am waiting for the euphemism that will best sugar-coat that dystopian feat.

The trouble is, most residents don’t buy into Robertson’s ‘vision’ (pun intended). They don’t like the idea of having to live in sardine cans or cargo containers. They don’t like sprawl, but they like density even less. So Greater Vancouver planners tried to package it under the name of “compaction,” ”as if homeowners were to compressed into a dumpster. When ratepayers wouldn’t buy into that garbage, planners re-marketed it under the label “Coreplan.” No dice. Now it’s back as “Eco-density.” Density with green paint over it. The one name you won’t ever hear from planners though is “growth-control.” That is outside their frame of reference. The idea that we can solve the housing crisis by limiting demand rather than increasing supply is off the table. I mean, that would mean slashing our immigration intake and such a proposal would run counter to one of Justin Trudeau’s “Canadian core values.” Heresy!

Our culture abounds with so many sweet-sounding buzzwords like “green,” “sustainable,” “livable,” “affordable,” “diverse,” “vibrant,” “inclusive,” “pro-active,” “choice” — the vocabulary of deceit. Attach these adjectives to anything you want to sell or run past the planning objectors — any self-serving development scam for example — and you can jam it through as easily as candy down a baby’s hatch.

The filter of growthist language in Anglophone societies is combined with the filter of multiculturalism — a smokescreen of left-wing tolerance that cloaks the right wing development agenda. Cultural diversity is much like a leaky air mattress that can only be kept afloat by constant pumping, the air being people from abroad. The language of diversity and tolerance is thus recruited to rationalize the policy of mass immigration and economic growth, always couched in the most positive terms. Growthism and Multiculturalism are a lexical duopoly.

How then do we remove their lens? The first answer is to substitute it with our lens. Ecological economists are attempting to do just that by developing indices of real economic performance, as if the planet mattered. We have to continually challenge media terminology and offer our own.

When the CBC boasts that the country is diverse we must counter by saying that it is culturally fragmented and without a moral compass. When the CBC says that immigration is the solution we have to demand that they prove that there is a problem. When the CBC states that the population of Newfoundland has stagnated we must declare that it has stabilized. And when they concede that the stratospheric rise of Vancouver property values and the consequent lack of affordable housing is driven by “offshore” buyers, we must insist that they call a spade a spade. It’s Chinese buyers, Mother Corp.

We must, in other words, reclaim the English language. Standard, plain English that is, the one with the clear lens. Not CBC-Speak.

PS In case you didn’t know it, Mayor Robertson is a member of Vancouver’s “Vision” party, which dominates City Council. A more appropriate name would perhaps be “Hallucination” party, funded by developers and supported by the growth lobby.