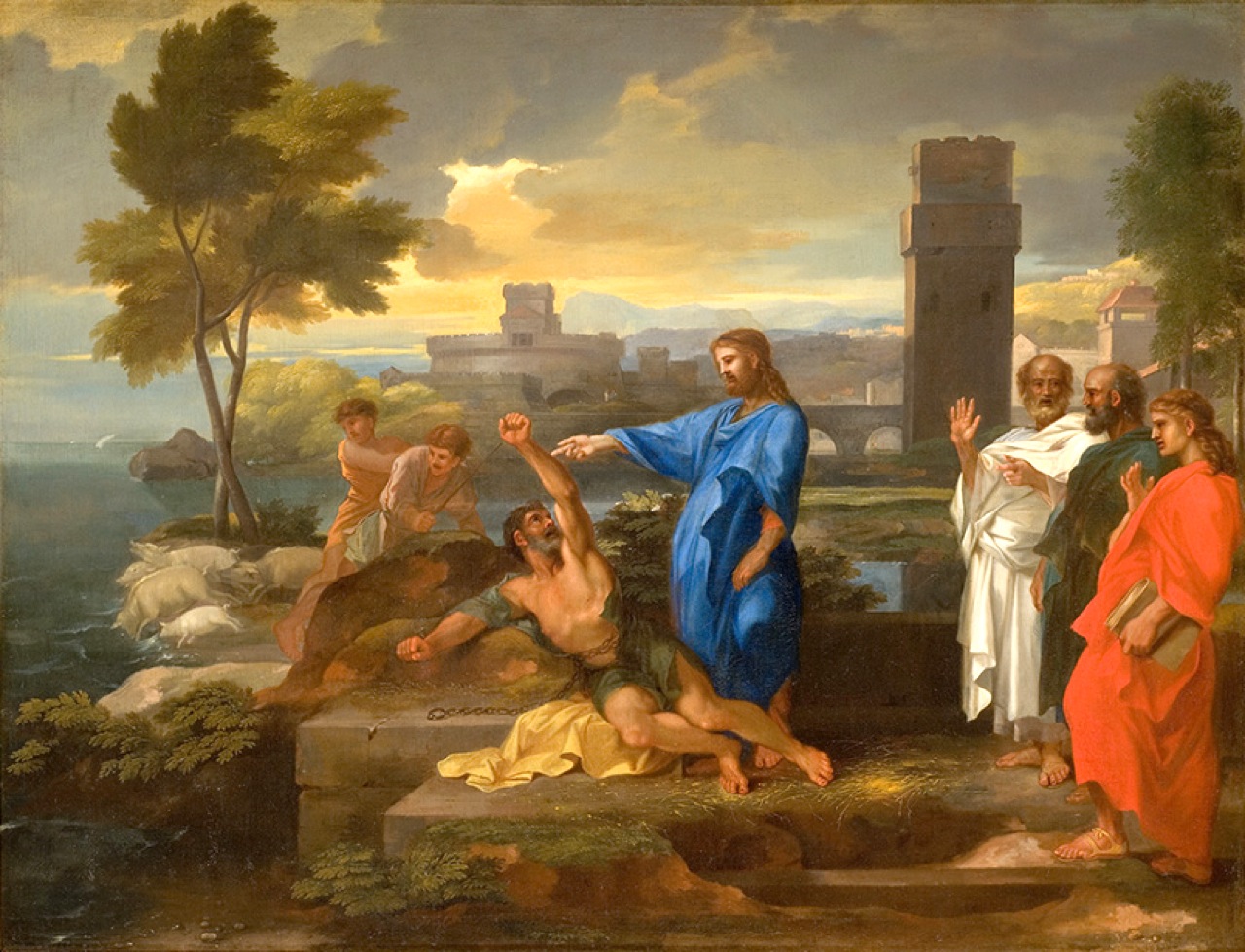 In the fifth chapter of the Gospel of St. Mark we encounter, from the very beginning, a tragic and bizarre story of a man possessed “with an unclean spirit,” who had his “dwelling among the tombs.” It is said that he was “always” wandering about naked, “night and day,” among the “mountains and the tombs, crying and cutting himself with stones,” and where “no man could bind him” nor “could any man tame him.”

And “when he saw Jesus from afar off, he ran and worshipped him, and cried with a loud voice, and said What have I to do with thee, Jesus, thou Son of the most high God? I adjure thee by God that thou torment me not.” And the reason given that the man adjured Jesus not to torment him, was because Jesus had “said unto him, Come out of the man thou unclean spirit.” Moreover, when Jesus asked the man his name he answered “My name is Legion: for we are many.” Accordingly, the man “besought him much that he (Jesus) would not send them (the many) away out of the country.”

At this point in the narrative, we come to learn that there was “nigh unto the mountains a great herd of swine feeding” and that the “devils besought him (Jesus), saying, Send us into the swine that we may enter into them. And forthwith Jesus gave them leave. And the unclean spirits went out, and entered into the swine: and the herd violently ran down a steep place into the sea, (there were about two thousand) and were chocked in the sea.”

Multiculturalism as MPD — A Brief Exegetical and Comparative Analysis

As an ordained Christian minister and research theologian, my area of specialization is theology for psychology and/or psychiatry. Of course, one of the tasks involved in this area of study is the task of integrating Christian theology (or more specifically Biblical psychology) with the rational-empirical psychology of natural science.

In looking at this particular case, found in Mark’s gospel, of a man “who was possessed with the devil and had the legion,” modern day psychiatry would, most likely, diagnose this individual, today, as suffering from Dissociative Identity Disorder (DID) or what was previously classified as Multiple Personality Disorder (MPD).

From a Christian-psychological point of view, there are a number of points of contact between the symptomatic or demonized state of this man from Gadara (or Gerasene Demoniac) and the symptomatic or demonized state of a multicultural society. That is, a multicultural society as the personification or embodiment of a national (and demonized) self, possessed by a legion of spirits.

In doing a very basic, exegetical, as well as comparative, analysis, on this specific Marcan text, one of the first things that strikes you is the different movements between the singular and plural. That is, between the use of “spirit” and “spirits” or “devil” and “devils.” We know from the overall context that Jesus addressed and/or dealt with both the “unclean spirit” as well as the “unclean spirits.” The question then becomes one of intended use and harmonization.

A second (and final) observation, which one encounters in this text, is the Gerasene Demoniac’s interchangeable use of the terms “my” and “we.” When Jesus asked the man what his name was, he answered “My name is Legion: for we are many.” Thus, the demonized man had clearly come to understand himself, or rather his individual identity, as an altogether different, confused and tormented plurality — a confused and tormented plurality of mind that, in turn, caused him to inflict harm upon himself.

And so, or likewise, a multicultural society, as the personification or embodiment of a national (and demonized) self, possessed by a legion of multicultural spirits, can only and ultimately understand itself as an altogether different, confused and tormented plurality as well — a confused and tormented plurality of (a national) mind that, in turn, causes it to inflict harm upon itself.

Fortunately, the biblical story does not end there, but rather it ends with the man, “that had been possessed with the devil,” or with the “unclean spirit,” “sitting, and clothed, and in his right mind,” conversing with Jesus, the “son of the most high God.”

And likewise, our story does not need to end tragically as well, but rather it also can end with our national self (a self that had been possessed by a multicultural “devil” or with an “unclean,” multicultural “spirit”) sitting and clothed, and in our right (national) mind, conversing, once again, as a “people” of “the most high God” with Jesus the “son of the most high God”:

13 For my people have committed two evils; they have forsaken me the fountain of living waters, and hewed them out cisterns, broken cisterns, that can hold no water.

14 If my people, which are called by my name, shall humble themselves, and pray, and seek my face, and turn from their wicked ways; then will I hear from heaven, and will forgive their sin, and will heal their land.