Uniformity in the Guise of Diversity: The Sham Debates on CBC Discussion Panels 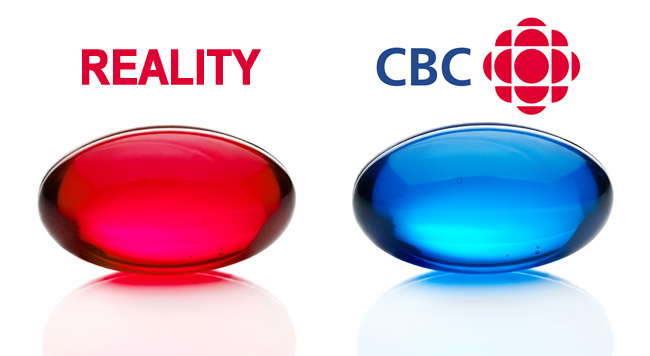 Leftist John Grierson, the first Commissioner of the National Film Board of Canada — later dismissed for his communist sympathies — once said something to the effect that successful manipulation of public opinion largely consists not in slanting the news, but choosing it. The real power of a news outlet lies in its ability to determine what is and what is not newsworthy. Thus, the public is not so much victimized by the “lying press” as by what patriotic Germans have recently dubbed the “Lückenpresse” — the “gaps” press. Leaving out crucially relevant information is as effective as misrepresenting it. The silent lie is as potent — and morally reprehensible — as the uttered lie.

Of course, this technique is not confined to the print media, but to television and radio as well. None employ it better than CBC Pravda, Canada’s state broadcaster, which may be described as the conversion of conscripted taxpayer money into thinly veiled ideologically partisan bullshit. Its apparent mandate is to manufacture consent by using journalism as a mechanism of social engineering. For the “Friends of the CBC,” the CBC is the appointed gatekeeper of information that can be trusted not to let inconvenient truths to slip by and red-pill the public. The objective is not to just keep disturbing ideas out, but to keep the masses in. Inside the CBC matrix. Canadians must not be let out of their sheep pen, or radical campus feminists would put it, their ‘safe zone’.

As I have long said, the CBC is an infallible guide as to what is not happening in the world. Perhaps then CBC “Pravda” is not an appropriate appellation, for “Pravda” is the Russian word for “truth.” A more apt description of the CBC and its mission would be “The Omission of Truth.”

There are several ways that Mother Corp pulls this off. One, the standard way, is to simply neglect to mention inconvenient facts and events — or acknowledge them only after competing media have forced their hand. If, for example, a TV viewer wanted to know anything about the Rotherham scandal, or the sexual harassment and assault of women in Cologne by swarms of largely male Muslim migrants, he wouldn’t turn to CBC National News. Not unless he wanted to wait until the story was cold.

Therein lies the irony. The broadcaster that is blatantly aligned to political forces whose clarion call is “inclusion” is noteworthy for its exclusion. When the CBC says that it has an “exclusive,” one’s instinctive reaction might be, “This is news?” The CBC is consistently exclusive of ‘hate’ facts, that is, facts that the political class and its flock hate to hear. The other classic CBC technique of news omission is the presentation of a discussion panel which implies that a full range of perspectives will be brought to bear on the topic in question. Typically, there is a panellist who is thought to be on the Left, and one thought to be on the Right — as the CBC defines it — and another with his or her feet planted on both sides of the issue. In truth however, all three are more or less on the same page. All are mired in the muck of the centre-left moral consensus. If you lie outside that consensus, you are not of the Right, but the “far Right,” a moral leper beyond the pale of acceptable discourse.

The funny thing is that this “far Right” upon closer scrutiny looks a lot like the Old Left looked like. A cause that favours job protection for indigenous workers, opposes unfettered free trade, globalism, and austerity and upholds the welfare state by defending it from the crippling claims made upon it by cheap imported labour and an endless stream of refugees. Oh, and like the Old Left, the new Right, the “alt-Right, or the “far” Right as they are variously called are dedicated to the preservation of freedom of expression. How quaint.

CBC panel discussions go essentially like this, “Hands up. Which panellist here believes that the official policy of Multiculturalism has been a disaster for this country? No hands? Then are there any panellists here who believe that the federal government should substantially reduce immigration intakes? No one? Then I thereby declare mass immigration and multiculturalism is the winner by acclamation and good for the country.”

The tag team of Mesley and Mansbridge cannot be likened to referees trying to break up two adversaries locked in mortal verbal combat, but to moderators of a pantomime, a mock duel between puppets who argue over various nuances of a common world view. The debates may be spirited, but they are not markedly polarized. In fact, when voices become strident, it is usually a reflection of trivial differences. It’s what Freud called the narcissism of small differences. People who resent each others’ similarity go to great pains to seize on trivial points of departure and inflate them so as to stake out what they believe is their distinctive identity.

That is what characterizes campaign rhetoric in Canada. Political parties do their best to magnify their differences in order to foster the illusion that they offer starkly different pathways, an illusion dispelled when the opposition forms the government. They campaign on the Left and govern from the Right — or vice versa. Eventually some voters get wise. They come to understand that there is no Left or Right, but merely the “ins” and the “outs.” Most however, never learn. They can be persuaded to run lemming-like over the cliff on cue in pursuit of the ‘leftwing’ or ‘rightwing’ boogeyman of the day. Meanwhile, the CBC wants to sell tickets to a fight, a real “horse race” with everything allegedly on the line. Everything, that is, except the policies that matter. The bipartisan policies that guide the nation, the policies of mindless immigration-driven population growth and continued cultural fragmentation, dressed up in the trendy jargon of economic development, sustainability and diversity.

The Objective: Simulate Debate to Uphold the Status Quo

But that is all as it should be for a state broadcaster whose mission is to manage dissent by limiting it to its handpicked ‘dissenters’. As the maestro of media propaganda, Joseph Goebbels, observed,

Noam Chomsky said much the same thing in his book, The Common Good:

The smart way to keep people passive and obedient is to strictly limit the spectrum of acceptable opinion, but allow very lively debate within that spectrum – even encourage the more critical and dissident views. This gives people the sense that there’s free thinking going on, while all the time the presuppositions of the system are being reinforced by the limits put on the range of debate.