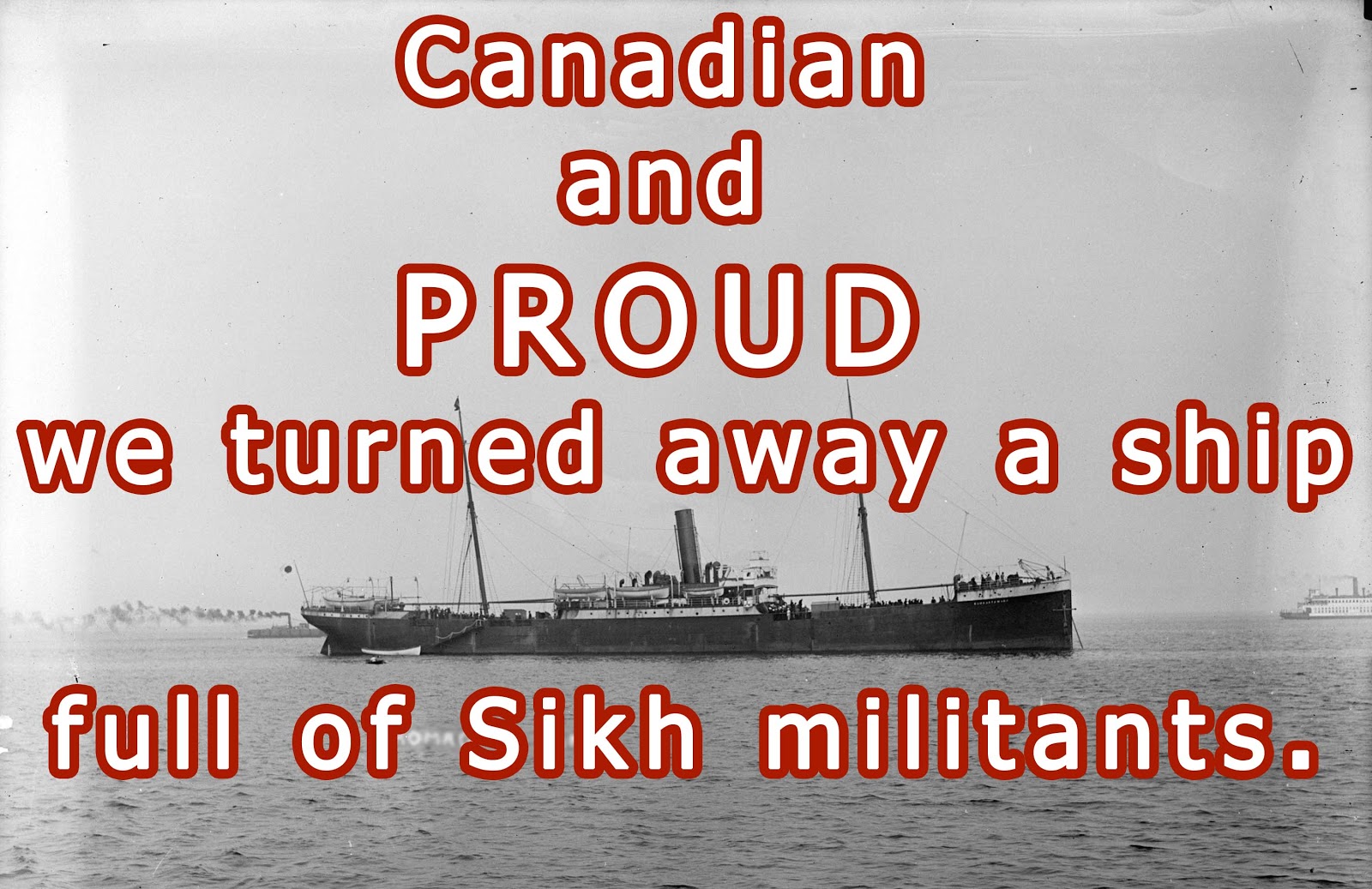 Canada’s relative economic performance may have markedly declined since it opened up its borders to the Third World, but at least this has been made up by the near-industrial output of apologies our leaders have been pouring on our ethnic deadweight.1 Consider the latest case: A full century ago, on 18 May 1914, an immigrant ship called the Komagata Maru came to Vancouver without official permission but with a number of militants onboard. It wasn’t allowed to stay, nor were its Indian passengers, the majority of whom were Sikh. British Columbia premier Richard McBride and Vancouver MP Henry Herbert Stevens did the right thing and called for the intruding vessel to be sent away. An example of good judgment from the good old days when Canada’s politicians still had a sense of responsibility for their constituency, one might think.

But these days our multicultural education system has put a big, anti-Canadian spin on this and other incidences of immigration restriction. The city of Vancouver built a monument condemning BC and Canada for not letting the passengers enter our country. In 2008 the legislature of BC gave an official apology and so did that same year former Prime Minister Stephen Harper. This past May 18th, there was yet another apology by our current PM, Justin Trudeau, but this time it was read in parliament.

Economic Reasons to Turn Away the Ship

Are all these apologies necessary? No, of course not. There were sound political and economic reasons for the Canadian decision to turn away the ship. As Dan Murray explained in Don’t Apologize to the Sikhs!, competition from low-wage workers was a major factor for the hostility towards Asian immigration into Canada and British Columbia especially. As the article suggests, this hostility towards cheap labour also meant opposing the horrid treatment of these low-wage workers by contractors — who were their countrymen — who exploited these people for their own benefit. It was then a lose-lose situation for both native workers and the cheap Asiatic ones. It also didn’t help that Asian migrants frequently committed fraud.

I have heard it said that Canada had to take in the Sikhs and other Indians aboard the Komagata Maru because both were part of the British Empire. However, it is conveniently forgotten that Canada was a self-governing Dominion with control over immigration. Canada was not just some colony with no control over its internal affairs; it had enacted many immigration laws between 1867 and 1914. The 1910 Immigration Act required all prospective immigrants, even if they were British subjects, permission to enter Canada (this act also excluded criminals, people with infectious diseases, mental problems, beggars and even those funded by charities). Moreover, the Komagata Maru wasn’t coming to Canada because of a shared love of Britannia.

Security Reasons to Turn Away the Ship

Gurdit Singh, the leader of the Komagata Maru was a member of the Ghadar terrorist organization which had the explicit aim of challenging British authority. Ghadarite literature was handed out to the passengers on board the ship. These people were nothing but tools for the Ghadar organization. One other famous Ghadarite was Mewa Singh who is apparently something of a hero of Sikhs in Canada. Mewa Singh assassinated British agent W.C. Hopkinson. The journalist Jagdeesh Man seems to be sanctioning Singh’s actions by claiming Hopkinson was being “heavy handed.” Well then, I guess the murder was justified then! Gurdit Singh was well aware that the Canadian government would not tolerate the Komagata Maru but he set off anyways. Why? Not because he wanted to help his fellow countrymen and co-religionists. No this was a purely political act and it was decidedly anti-Canadian and anti-British. The illegals on board were but pawns to Singh and the Ghadarites.

Given the actions of the Sikh community in Canada today one can also understand the concerns regarding assimilability. They have a penchant for glorifying terrorists besides Mewa Singh. Sikhs often depict the Air India flight 182 bombers as “martyrs” and the same is true of other members of Babbar Khalsa and other terrorist organizations. Supporters of these people may be a minority but they are a prominent one and in areas with large Sikh communities like the BC city of Surrey (where they are 30% of the population) are no stranger to seeing positive depictions of terrorists in posters and other visual displays.

In 2007, India lodged a formal diplomatic protest in Canada after a parade in Surrey featured a float portraying slain Babbar Khalsa leader Talwinder Singh Parmar as a “Sikh martyr.” In 2008, the Indian high commission in Ottawa expressed concern about Sikh separatist activism in Canada. If tensions in India pick up again, Vancouver may be a battleground.

While the militant Khalistan liberation movement seems to have died down there are still calls for Khalistani independence, with signs being put up in public places such as universities calling for independence, with some even claiming India has attempted to genocide Sikhs. I have no problem with Khalistan becoming a reality but its not a Canadian issue. We don’t need to be brought into this conflict and we certainly don’t need to entertain silly ideas like terrorists = martyrs.

I’ve found that many Sikhs and other South Asians dislike our monarchy and British heritage. Sadly, that is true of many immigrants but in their case it stems from anger over having been colonized by UK. Just as in 1914, in 2016 Canadians are used as a stand-in for the Raj. Even without Komagata Maru, we would still be attacked and shamed for our roots. Sikh culture has retained its combative trait in the Canadian diaspora:

Overall, Canada has been good to Sikh immigrants. Although they are not particularly prosperous relative to the rest of Canadians, they are not impoverished. Many Sikhs are employed as taxi-drivers and truckers. While most Sikhs just eke out a respectable living, some have achieved great prosperity. There is now a class of Sikh professionals who serve the needs of the community…Upper class whites in British Colombia are, of course, barely on the radar when it comes to crime, but Sikhs do not follow the same trend. Sikh culture is steeped in confrontational, warrior values, and those values are imbibed by young men with their mother’s milk. “Eventually,” says Indo-Canadian Reporter Renu Bakshi, “a young boy will become a young man and step into a community that thrives on bravado — a world where everything is a grudge match, a fight to the finish.” The hierarchy of crime has changed little over the last three years, though both Asians and Sikhs are gaining on the Bikers.

And let us not forget the issue of ‘honor’ killings and sex-select abortions which are also quite common. Thankfully the Sikhs are not as extroverted as Muslims but that does not mean their problems are acceptable here in Canada. Sikh gang violence may generally target fellow Sikhs but others have also suffered and of course everyone has to pay for the greater police presence required to snuff this activity out. As the VDare article cited above notes, these criminals are not generally acting out of a life of poverty, joining gangs out of a perceived necessity to survive. Why import issues that need not exist? The issues surrounding Sikh gang violence and ‘honour’ killings, which aren’t minor problems, or the terrorist sympathies would never have existed if Canada hadn’t been so accepting of multiculturalism and mass migration.

Eurocanadians — Forced to Rob on Their Knees For Ethnic Votes Indeed, Canada has overall been good to Punjabis and other non-Whites. Yet, we are today meant to apologize for every act or supposed act of injustice. Apparently, as this new apology for what happened in 1914 shows, we are meant to apologize more than once.

How many apologies will it take? Euro-Canadians will now be reduced to constantly apologizing for past events but other groups will be more or less free to do as they please. We will have to wallow in self-hatred and shame but they won’t. Sure journalists and others have looked into the problems in the Sikh community but hey at least they aren’t like those evil Euro-Canadians who wouldn’t let a boatload of unauthorised persons land on their shores. The Sikhs will always have victim status.

Big point is to win voters. Note how Trudeau advertised this new apology during the vaisakhi holiday and evidently Punjabi is the third most spoken language in Canada — the more populous Chinese have a wider variety of languages. No doubt the Liberals hope to lockdown the Punjabi vote for years to come. Sad days are these when political parties vie with each other for the votes of foreigners and completely disregard the founding majority. I don’t care if Sikhs or other new Canadians want to hate our institutions and ethnic heritage but they can’t do it here. If our traditions are so oppressive then don’t come here.

As Paul Bradley and myself have both noted, Justin Trudeau has openly stated that “Canada is post-national.” So, in the eyes of our Prime Minister, we essentially stand for nothing. But, as the old adage goes, if you stand for nothing you will fall for anything. Trudeau’s destructivism shows that our country has fallen for something quite sinister: internationalism and self-hate. An endless series of unjustified apologies will be following to keep this new order running unless Eurocanadians learn to speak with their own voice and make their protest heard against the distortion of their history.


[1] In 1971, when Canada was still 96% White and introduced its multicultural state doctrine, its GDP per capita was 6th highest in the world. In 2014, after the share of Eurocanadians had fallen to less than 75% of the population, its GDP per capita had dropped to the 14th position.
Related posts: