The Hurt Feelings Scale for Our Minority Snowflakes 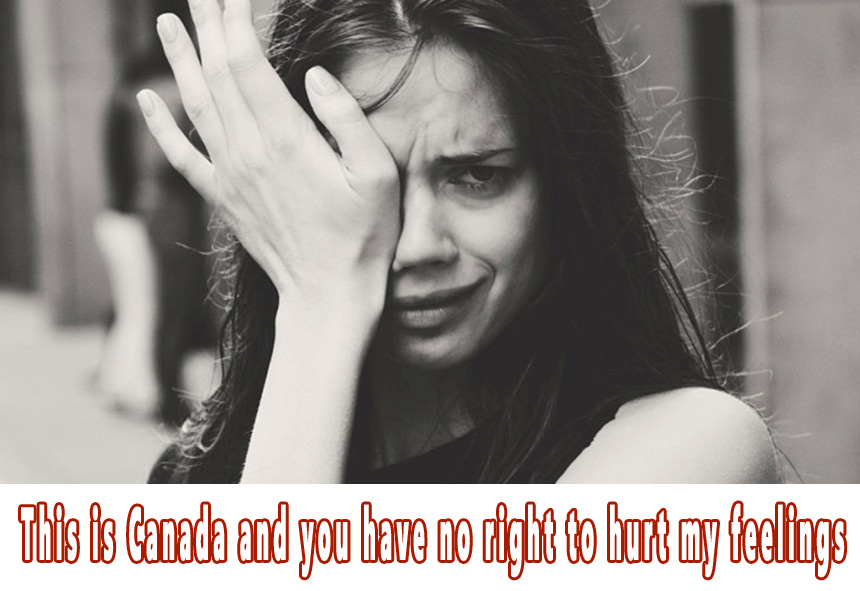 Psychology professor Mark Leary of Duke University achieved notoriety for his construction of various “scales” for the purpose of personality assessment. There is the “Interaction Anxiousness Scale”, the “Brief Fear of Negative Evaluation Scale”, the “Need to Belong Scale”, the “Blushing Propensity Scale”, the “Imposterism Scale”, the “Social Physique Anxiety Scale”, and something that appears to be custom-made for Canadian political culture: The “Hurt Feelings Scale” (see below).

I believe that the “Hurt Feelings Scale” has the potential to become a mainstay of sound government emotional management. Think of the possibilities. A Hurt Feelings Form (HFF) could be handed out to every immigrant the moment he has been sworn in at the Citizenship ceremony. In fact, the government could send out this form to every member of a visible minority or identity group to monitor their feelings so as to determine if other Canadians are as racist, sexist, homophobic, trans-phobic, Islamophobic and micro-aggressive as they say we are.

If Muslims, feminists, indigenous activists, immigrant women of colour and LGTB people continue to report that their feelings are getting hurt, the government will know that “there is much more work to be done” in terms of pandering to hyper-sensitivity, raising diversity awareness and checking our privilege. Grants to grievance groups could be increased, more staff could be hired, and brand new university departments could be funded to improve the metrics of calibrating hurt feelings. Thousands of PhD theses could be written about the appalling scale of hurt feelings in this country.

The government could even issue quarterly reports on the status of hurt feelings in Canada, much in the way that Statistics Canada issues quarterly reports on the state of the economy. Just as the Governor of the Bank of Canada is able to make adjustments to prime interest rates in response to changes in the quarterly inflation and growth indicators, the federal government can, in response to changes in the Hurt Feelings Index (HFI), make appropriate adjustments in the number of official apologies it makes for the alleged past transgressions of an intrinsically and incorrigibly racist people. And it could keep widening the definition of hate speech and bullying to ensure that the grievance economy doesn’t go into a tailspin.

If the hurt feelings indicator has gone up from what it was 3 months before, then governments, universities and companies would be enjoined to redouble their efforts to curb our persistent insensitivity. Speech codes would be made more restrictive and “safe zones” would be expanded. However, if the hurt feelings indicator is down from what it was 3 months ago, then Social Justice Warriors, ethno-cultural group leaders and anti-racism activists would be told to pull up their socks and cultivate yet more hyper-sensitivity, raising the bar of outrage so to speak. They would be officially encouraged to seek out unexplored areas where designated victim group members might have just cause to feel hurt. In other words, they would be told to use their imagination (as if they haven’t already). Surely if they put their minds to it, they can conceivably find a racist, sexist, homophobe, transphobe or Islamophobe under every bed. If the Southern Poverty Law Centre can do it, they can too.

If they can’t do this, if new frontiers of racism, sexism, homophobia, transphobia, Islamophobia and micro-aggression cannot be found, they would be made to understand that the whole grievance industry could come to a grinding halt, with grave economic consequences. If people in victim groups stop feeling hurt, then the grievance industry will lose its raison d’etre, and a whole lot of social workers, community organizers, anti-racist workshop facilitators, Women’s Studies professors, and Multicultural Services workers would be laid off. It would lead to a crisis of catastrophic proportions, one that we likely would never recover from. Amidst the chaos, Canadians might claim their birth right and run amok speaking their minds. Free unfettered discourse and frank discussions might break out across the land. It is a risk that we cannot afford to take.

As ours is still a consumer-driven economy, Canadians need to be reminded that we all depend on the purchasing power that this parasitical layer of professional grievance mongers represents. Without the benefit of their disposable income, we’re toast. Without their conspicuous consumption, without the infusion of their cash, a cascade of layoffs would ensue. The Minister of Finance would not be happy.