Justin Trudeau and the Dismantling of Canadian Identity 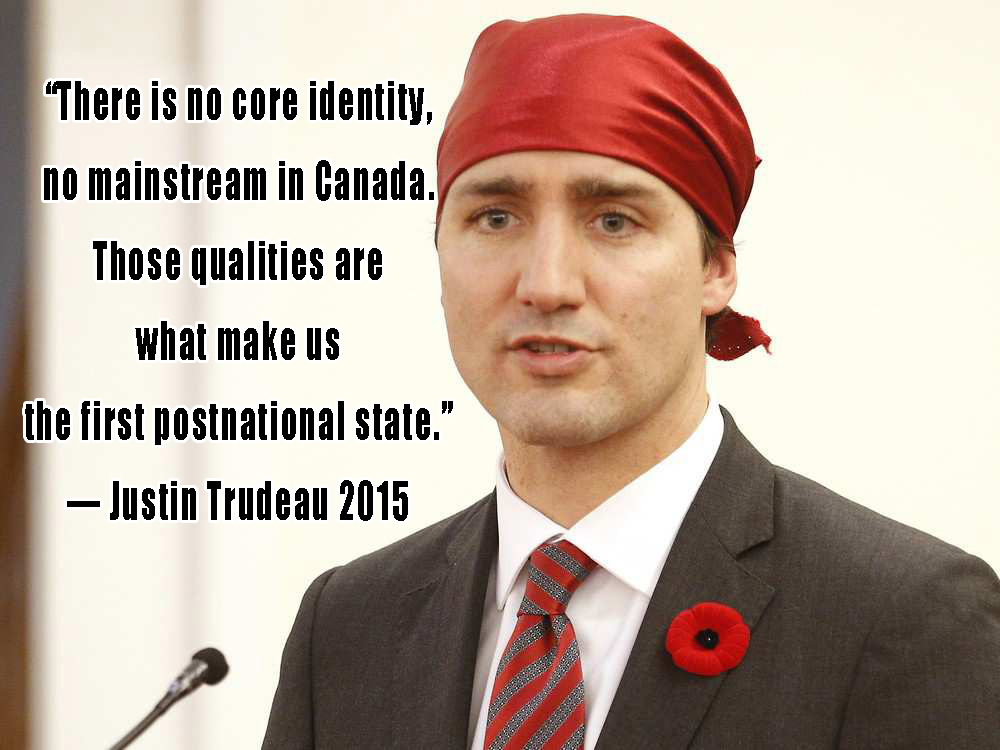 Justin Trudeau, Prime Minister of Canada, is a man with a vision for his country. What remains unknown, however, is whether or not Canadians share this vision.

Thus far in his tenure, Trudeau has been far more explicit about what he does not want for Canada than he has been regarding the kind of nation he envisions for our future.

One thing he does not want, as publicly stated shortly after taking office, is a Canada based upon “national identity.” This bold assertion, in effect, tells us Trudeau does not believe in a Canada defined by a national heritage developed over 148 years of history. From Canada’s early pioneer settlers, to our cultural roots as an English and French Canadian society, through to the struggle for an identity independent of American cultural domination — Justin Trudeau has deemed these symbols of our nationhood to be irrelevant.

Up to this point in our political evolution, it was understood that a primary role for a Canadian prime minister was one of nation-building. As a prototype, we can look to the founding of our country, whereby the fathers of confederation envisioned a federalist nation united coast-to-coast by the Canadian Pacific Railway.

At present, however, we find our current prime minister desirous of negating the foundations of our national heritage. It is prudent to keep in mind that when a decision is made to eradicate a nation’s historical identity, something concrete will be required to serve as a replacement.

Curiously, rather than unveiling a bold new plan for the society we are to become, Trudeau has been rather obtuse about the subject. Stating early in his four year term that nationalism is not part of Liberal government ideology, Trudeau wants our nation to find its identity by way of a concept of “shared values.”

How are Canadians to comprehend this post-modern proclamation? After all, we live in a nation which holds “diversity” to be among its top core values. Indeed, present-day Canada is a composite of some highly divergent communities. For example, it is reasonable to state our LGBT community maintain values largely opposed to those of our fundamentalist religious communities.

How then are we to develop the synergy necessary to create unity among such disparate communities? To employ a biblical allegory, Trudeau’s vision is not unlike tearing down a house built upon rock, and rebuilding it upon sand.

Marcus Garvey once stated, and I paraphrase slightly, that “a nation without history is like a tree without roots.” Even a six-year old understands that when a tree is severed at its roots, it dies. Are Canadians to be believe this concept is beyond the understanding of the prime minister of our country?

Taking into account the demise of our nation cannot possibly be among Trudeau’s intentions, what are we to make of his intangible conception of our identity? Lacking a properly articulated definition from government, Canadians are left to speculate for themselves.

Based upon Trudeau’s curious allegiances and alignments, one really has to wonder. For example, since gaining office in late 2015, the Liberals have been an absolute tear regarding the importation of Middle Eastern refugees. One billion dollars spent, 30,000 refugees and counting brought to Canada. Yet, despite the U.S. government’s declaration that the murder of Christians in the Middle East constitutes an act of genocide, the Trudeau government has excluded these poor souls by way of a program focused exclusively on Muslim refugees.

Is this an example of shared values? If it is, it is unlikely to be shared among the 85% of our nation raised within the Christian faith. How about the fact that our government refuses to officially declare we are at war with ISIS? Do Canadians share this sentiment, as they sit in their homes wondering if the senseless mass murder which took place recently in Brussels will also occur upon Canadian soil?

Through these developments, we begin to gain insight into the true nature of the Liberal agenda. Indeed, beyond the voting process by which he gained office, Justin Trudeau has little, if any, concern for public opinion or the will of the majority.

In reality, his loyalties lie elsewhere — with the United Nations, Ban Ki Moon, Barack Obama, Melinda Gates and other powerful globalist entities. Indeed this is Justin’s “sweet spot” — the area where we find his true ambitions.

History may prove otherwise, however, it is unlikely that Justin Trudeau will amount to much more than the man who put the final nail into our nationalist coffin. It appears Trudeau is simply leading Canadians down a path toward a blank slate of a nation.

What shall occur as a result? Considering the history of nations, the situation has every potential to result in a social power struggle of gargantuan proportions. Traditional versus Multicultural Canada. Progressive versus Conservative Canadians. Secularism versus religious fundamentalism. Foreign money versus domestic need. Indeed, it is all rather “Lord Of The Flies” — and most of us educated within Canada’s public school system know how that story turned out.

Such is the state of our nation under Justin Trudeau — a leader unable or unwilling to envision how Canada will move forward in its quest to become a united and harmonious nation.