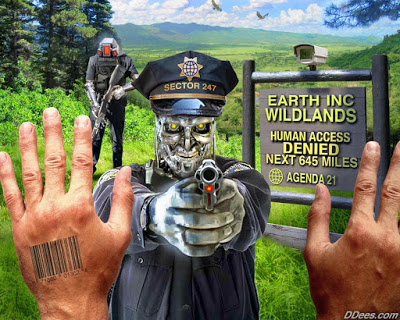 Agenda 21 is a world wide environmental plan produced at the U.N. Conference on Environment and Development in Rio de Janeiro in 1992. The outcome of this so-called “Earth Summit” is a 300-page document divided into 40 chapters that seeks to re-order life on Planet Earth, end the nation state, eliminate private property, reduce human populations and create world government.

I am standing on a corner in the small town of Ashcroft on the Thompson River in British Columbia. Statistics Canada says the population in 2011 was 1,628. It is certainly less now. How do I know this? The town has one grocery store, one school (it used to have two) and one doctor (it used to have a hospital with an emergency department). It also used to have a gas station, but that closed. A town without a gas station.

And yet, there is life here. There are two trans-continental railway lines running through town, CN on the North side of the river, CP on the south, and they are both busy. I counted a 153-car train on the CP line composed of two locomotives in front, one at the 70-car mark and a fourth at the rear. On the other side, CN trains were constant, day and night. Unit coal trains were heading west and container trains were heading east. The global economy is certainly humming on those 130-year old tracks.

To that extent, Ashcroft is unique. Plenty of other small towns and cities across Canada do not even have working railways. They had them, but they are gone along with the industries, jobs, schools, stores, people and all the other bits and pieces of a modern society.

We are told by government that centralized services are more efficient, that regional schools give better education than local ones and that helicopter ambulances will wisk us away to a big city trauma centre after we are triaged at what used to be the local hospital. Most of us accept that argument because we believe in capitalism and efficiency. Our grandparents saw what happened to Canada’s rural economy in the early part of the 20th century when combines took over from threshing machines. And our parents saw the move to the cities accelerate after WWII. This down-sizing of rural and small-town Canada must be part of the same thing we think; collateral damage from the march of progress.

But what if it is not the result, but rather the cause of the changes in question? What if we have misidentified cause and effect?

We know, for example, that groups like the Bilderberg Group of political and economic elites have private conferences at which they discuss such things as globalism, the environment and trade. Discussing Agenda 21 fits right in:

In 2001, Denis Healey, a Bilderberg group founder and, a steering committee member for 30 years, said: “To say we were striving for a one-world government is exaggerated, but not wholly unfair. Those of us in Bilderberg felt we couldn’t go on forever fighting one another for nothing and killing people and rendering millions homeless. So we felt that a single community throughout the world would be a good thing.”

There are other similar organizations, notably the World Economic Forum which is based in Geneva and typically hosts 2,500 top business leaders, international political leaders, selected intellectuals, and journalists to discuss the most pressing issues facing the world. Its latest themes were:

There is a thread running through these meetings, no matter the theme; it is that business and government leaders get together to discuss the very same issues laid out in Agenda 21. They do so largely in private. Why is that? And what, precisely, do they decide to do after chewing over their Kobi beef and washing it down with Champaign?

Let us view all this through the lens of Agenda 21. Let us say they really do want to de-populate rural North America. How would they do that? One way would be to encourage the development of corporate farms. If they buy out local families, those families will stop shopping at local towns and the towns will, eventually, go bust. If they promote the growth of bio-fuel, productive farmland will be taken over for the growing of corn for ethanol. If they encourage seasonal workers, guest workers and illegal aliens to work the corporate farms, they will destroy the economic basis even for tenant farmers.

Supermarket chains and retail petroleum companies can do the same; “rationalizing” their retail operations by closing “inefficient” stores and stations.

As the tax base withers away, local municipalities fall behind in road maintenance, water and sewer services, policing, building inspections and animal control. Eventually, they too are amalgamated. And in the end, the town is unincorporated, everyone moves away and we are left with a modern version of a gold rush ghost town. All of this, everything I have just mentioned, is in line with the proposals of Agenda 21.

But there is more. The key result of the drive for free trade, such as the Trans Pacific Partnership (TPP), is to increase the transfer of manufacturing from North America to Asia and its replacement by a consumer society based on debt. As more people lose their jobs, they also lose the ability to pay for the maintenance and upkeep of their cars. They sell their cars and homes and move into lower cost condos and apartments. They concentrate, rich and poor, in the major cities.

Cities help this process along by allowing residential prices to rise (Vancouver homes now cost more than $1-Million) while promoting high rise condominiums, public transit and bicycle lanes. Indeed, in Vancouver, car drivers now pay a tax that goes straight to the buses that clog the roadways in front of them. Soon, sooner than anyone realizes, governments everywhere are going to move to taxation based on mileage. Car computers will be downloaded automatically by road sensors and the cost of your trip will come out of your bank account.

When that happens, nearly everyone will stop driving and will hunker down in their apartments in front of their TV screens. To go to the “country” you will need a rental car, park access permission, and God knows what else. Agenda 21 will be in charge.

This may sound like a distopyan fantasy, but now, clearly it is seeping through the cracks in our lives, coming from almost every angle. When you started reading this posting you probably said to yourself you were glad you were not living in Ashcroft with its declining services.

I have news for you. We are ALL living in Ashcroft, and soon we will be living in The Hunger Games; destitute, impoverished, enslaved and enthralled to the most pervasive and pernicious social-engineering idea since Communism.

The Wikipedia entry on Agenda 21 has been sanitized, but there is plenty on YouTube to make your hair stand on end. But put that aside. Start looking around. Ask your friends. Take a drive in the (largely deserted) countryside. Decide for yourself. Is not all this social and economic decay just a titch too perfect?