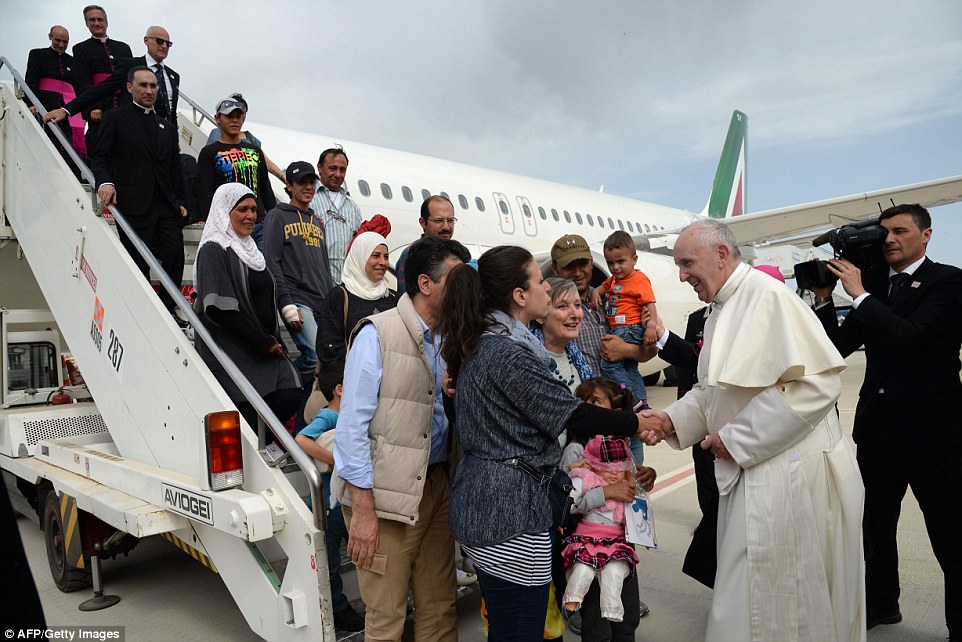 Love doesn’t have much to do with it.

Pope Francis had a choice to take in Syrian Christian refugees from Lesbos, but he chose Muslims only.

At first I thought this guy was an idiot and a fool. Now I know it for sure.

And its all to show how ‘tolerant’ and indiscriminate his Christian ‘compassion’ is. Methinks the Pope is fully beguiled by this craze for “interfaith dialogue”. He thinks you can bring a poisonous snake to your bosom and tame it with love. His need to believe in the inherent “goodness” of those whose aim is destroy him and the civilization that nurtured him trumps all reason and evidence. His agenda is to see all borders removed and a welcome mat put on for the hundreds of millions of poor migrants who want to move to Europe or North America. If he had been King of Troy the Greeks wouldn’t have needed to construct a wooden horse to gain entry to the city. “King” Francis would have opened the gates and embraced them.

My Lab retriever “Barney” is like that. He never met an intruder that he didn’t welcome with a wagging tail. But I doubt that he would be dumb enough to allow Muslims into the house. Why would he? They wouldn’t allow him in their house.

Yet here we have a homo ‘sapiens’ in the Vatican who doesn’t understand Barney’s basic concept of reciprocity. If Christians are not welcome in Muslim lands, why should Muslims be welcomed into Christian lands? A wolf wouldn’t allow a sheep to enter his den, so would it not be phenomenally stupid for a sheep to welcome a wolf into his pen? Does this Pope really believe that if the ascendant Muslim diaspora within our gates continues to grow exponentially these transplanted Muslims and their children, once in the driver’s seat, will somehow do what Muslim nations fail to do? Does he believe in a pluralist Muslim state where citizens of every faith are treated equally? Does he think that his brand of Christian “love” will be requited? Does he think that Christians will be safe in a European Caliphate? If he does, he truly does believe in miracles.

Personally, I have an easier time believing that Jesus Christ walked on water and rose to heaven on Easter Sunday than I would believing in the emergence of a durable Muslim-dominated democracy where mosque and state are separate and non-Muslim minorities accorded equal status.

One question. Since open borders is every big corporation’s wet dream, I wonder if the Vatican Inc. has shares in them? OK, silly question. Nevertheless, it would be interesting to examine their stock portfolio and see how many of the biggest and the ‘baddest’ are in it. How much equity does this Church have in evil?

It is a symbiotic relationship. The Vatican feeds off corporate profits, and the corporations get more cheap imported labour to earn it — under the cover of “compassion” and human rights. That is, ‘migrant’ rights. The rights of indigenous labour not to see their wages depressed or their jobs displaced by these migrants — sorry — “refugees”, is evidently not a concern to this Pope or the Social Justice Crusaders in his coalition. Muslim Lives Matter. But not the lives of Europeans. Even Syrian Christians apparently have to get to the back of the bus if there are Muslims boarding it.

That raises the possibility that this Pope is actually smarter than he seems. Maybe I have it completely wrong. Maybe he is driven by another agenda $$. If so, then he is a consummate deceiver. He plays the fool to conceal his mercenary mission. While progressives are heaping praise on him, the Vatican is quietly counting the money.

Kind of reminds me of Tina Turner’s hit song “What’s Love Got to Do With It”. In this case, not much.