Will Kymlicka, Part II: Canada as the “Prototype” Nation to Destroy European Identity Across the World 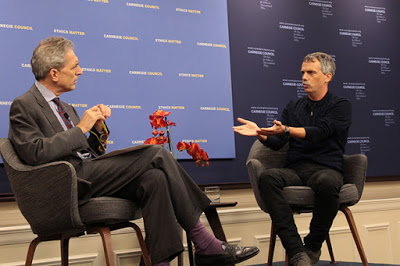 Will Kymlicka believes that the promotion of diversity is “necessary to sustain a well-functioning democracy”. He is not referring to the diverse minorities that have lived in Canada for centuries. He means that the democratic character of Western nations obliges them to diversify their culture against the majority Anglo (and broadly European) roots of the nation. European nations cannot be called “liberal democracies” unless they have policies that encourage mass immigration and create thoroughly race-mixed cultures. This is why Kymlicka uses the term “immigrant multiculturalism” rather than just “multiculturalism”, for he is not speaking about Canada’s historical diversity, about the minorities that co-existed with the Anglo-Quebecois before Third World immigration accelerated after official multiculturalism was introduced in 1971. He is saying, point blank, that Canada must forego its European heritage, become a racially diverse nation, if it is to be a “well functioning democracy”.

Since he began his career, which has allowed him to join the top one percent income earners of Canada, and live in all-exclusive White enclaves, Kymlicka has been pushing this idea that Canada “must never be allowed to remain white again”.

He tells unsuspecting Canadians that their nation is unique in having embraced immigrant multiculturalism. Yet he has spent most of his teaching career in Europe promoting the “unique model of Canadian multiculturalism” because he believes that this “unique” model has to be extended into Europe so as to make that continent “unique” as well. The current leaders of Germany, France, England, Sweden etc. are now telling their aboriginal populations that they are unique in their acceptance of immigrant diversity.

Much as Kymlicka pretends he has developed a theory of multicultural citizenship to reflect Canada’s historical uniqueness, what he has really developed is an ideological program to rationalize mass immigration across the West in order to eradicate, not reflect, the European identities of the entire Western world.

…for various European national minorities, which provided both universal and individual rights and certain group-specific rights regarding education, local autonomy, and language.2

Kymlicka wants to create the impression that his theory of group rights is a natural continuation of past trends in the liberal tradition. However, while such liberal nationalists as Camillo di Cavour (1810-1861) and John Stuart Mill (1806-1873) did emphasize a form of nationalism compatible with liberal values, they were firm supporters of national identities at a time when a “non-xenophobic nationalism” was meant to acknowledge the presence of age-old European ethnic minorities within European nations. These classical liberals were not calling for minority rights for the purpose of integrating masses of immigrants from non-European cultures. They were advocating civic rights for their own people including minorities already established inside the nations of Europe.

An Experiment of Major Proportions

Therefore, the concept of “multicultural citizenship” is best described as an ideological programme to bring a radically new ethnic and cultural reality within the West. Kymlicka’s theory can be seen as a theoretical formulation of Pierre Trudeau’s vision of Canada as a model for humanity in its ability to have multiple cultures with no one culture laying claim over the nation.

Some have argued that Kymlicka’s group rights theory is inconsistent with Trudeau’s well-known affirmation of individual rights against collective identities. There is some truth to this; at the same time, however, Kymlicka has worded his theory of groups as a temporary measure intended to facilitate the assimilation of immigrants and ensuring that they don’t suffer discrimination at the hands of the majority culture. The ultimate goal, he has said, is to have everyone, including immigrants, assimilate to a non-discriminatory majority culture that is heavily into individual rights, backed by a socialistic communitarian background.

This is why Kymlicka has been called a “liberal multiculturalist” rather than a “communitarian multiculturalist”. Charles Taylor is a communitarian multiculturalist in that he advocates ethnic groups rights for minorities without time limitations or expectations that they will embrace the Western model of individual rights. But, in truth, the reality of mass immigration, bringing hundreds of thousands of new immigrants every year, with a strong sense of their own ethnic identity, into Canada, has created a situation that is closer to the arguments of Charles Taylor than to any liberalism that stresses individual rights. In fact, while in principle Kymlicka offers a liberal multiculturalism, a temporary system of group rights, the reality is that today, decades after he formulated his theory, he is still advocating group rights for immigrants.

The fact that Kymlicka has never offered any time-limits on immigrant group rights is inseparable from the more pertinent fact that he has never offered any limits on the number of immigrants or the number of years that Canada should have open borders, except to say that “Canada must never again be White”. We need to understand that the ideological imperative energizing Kymlicka’s argument is not cultural rights as such, or liberal multiculturalism; it is, rather, the racial diversification of Canada’s population as an end in itself.  Be it noted that the promoters of diversity, with Kymlicka as their main ideological supporter, are calling for ever higher immigration levels, 500 thousand per year. Globe and Mail journalist Doug Saunders thinks that Canada’s population should be increased from 31 to 100 million within a few years, and that this is the best way to finally nail the coffin on the White majority in Canada.

It can be safely argued, then, that Kymlicka is wilfully deceiving Canadians when he says that groups rights are meant to be temporary and that the intention is to make everyone “integrate” into the majority culture of Canada, and that he is a liberal. No, he is a hard-core cultural Marxist.

In-between the lines of his major book, Multicultural Citizenship, one can detect the mind of someone intent on destroying Canada’s Christian European heritage. He muses over the fact that “many state symbols such as flags, anthems, and mottoes reflect a particular ethnic or religious background” and that it would only be fair for other ethnic groups to demand “that their identity be given the same recognition as the original Anglo-Saxon settlers”.4

As a possible solution he proposes “redesigning public holidays, uniforms, and state symbols. It is “easy”, he says, to “replace religious oaths with secular ones, and so we should.” It would be “more difficult but perhaps not impossible, to replace existing public holidays and work-weeks with more neutral schedules for schools and government offices”. In other words, he is anticipating a point in Canada’s history when the entire “societal culture” will be neutered and neutralized away from any Eurocentric characteristic. In this vein, he endorses as well the rewriting of Canada’s history in order to give an equal voice to diverse ethnicities in the making of Canada and hide away any foundational role assigned to Anglo-French Europeans.

Kymlicka explicitly says in his major book that immigrant multiculturalism is a process in which Eurocanadians will be “a constantly shrinking minority”. This is the plan.

What distinguishes ‘civic’ from ‘ethnic’ nations is the fact that anyone can integrate into the common culture, regardless of race or colour.5

But the historical record on the origins of liberal nations does not support this view. Western liberal nations were not founded in the absence of an existing ethnic collectivity, and certainly not for the purpose of mixing all the races of the world within one state. When modern states emerged in Europe in the nineteenth century, they did so as liberal states within ethnolinguistic boundaries and majority identities.

The widespread claim that Western nations were meant to be civic only was popularized by anointed by Eric Hobsbawm in Nations and Nationalism since 1780: Programme, Myth, Reality (1989), and by Benedict Anderson in Imagined Communities: Reflections on the Origin and Spread of Nationalism (1983) and by Ernest Gellner in Nations and Nationalism (1983). These authors exerted an enormous influence in academia, erroneously arguing that the nation states that emerged in nineteenth century Europe were not created by a people sharing a common history, a sense of territorial belonging and habitation, similar dialects, folkways and physical appearances. The nation-states of Europe were “socially constructed” entities, “invented traditions”, “imagined” by people perceiving themselves as part of a “mythological” group in an unknown past.

Thus was born our current non-ethnic conception of national membership: the “civic” or “propositional” nationalism Western elites across the ideological spectrum now endorse. This nationalism defines the nation as an intellectual association of people with equal rights. It tries to give the impression that Western nations have always been blank slates open to immigrants from time immemorial. It further stipulates that Western nations without open borders are violating their liberal ideals.

The concept of civic nationalism has been seriously challenged. The nationalist ideologies of nineteenth century Europe were not based on imaginary beliefs, but driven by human passions nurtured by common myths, historical memories, ethnic attachments, and indigenous ancestries.

Promoters of civic nationalism keep insisting that civic nationalism is inclusive and tolerant; whereas ethnic nationalism is supposedly exclusive in excluding mass immigration. But, again, the historical record shows that those states possessing a high degree of ethnic homogeneity, where ancestors had lived for generations — England, France, Italy, Belgium, Holland, Sweden, Norway, Finland, and Denmark — were the ones with the strongest liberal traits, constitutions and institutions. That is why minority rights became a legitimate component of these liberal nations. By contrast, those states (or empires like the Austro-Hungarian Empire) composed of multiple ethnic groups were the ones enraptured by illiberal forms of ethnic nationalism and intense rivalries over identities and political boundaries.

This should not surprise us: a state divided among many ethnic groups will find it far more difficult to develop a sense of common national identity and therefore inspire a sense of citizenship and self-sacrifice in the nation’s members. John Stuart Mill said as much:

It is in general a necessary condition of free institutions that the boundaries of governments should coincide in the main with those of nationalities.

More recently, Jerry Muller has argued in Us and Them:

Liberal democracy and ethnic homogeneity are not only compatible; they can be complementary.

Even the influential commentator David Goodhart, once a supporter of open borders in England, has now admitted that the extensive welfare programmes that socialists cherish require high levels of ethnic solidarity — the very cohesion he has seen seriously eroded in Britain with the frenzied promotion of immigration. Finally, the multicultural ideology that is being promoted in civic nations is premised on the suppression of ethnic nationalism among Europeans. Critics of immigration feel and know what this climate of intolerance is all about, in our inability to speak openly, use our names when we write, feel threatened in our jobs and businesses. Only edgy critical thinkers like Kymlicka can rack up hundreds of thousands of dollars.