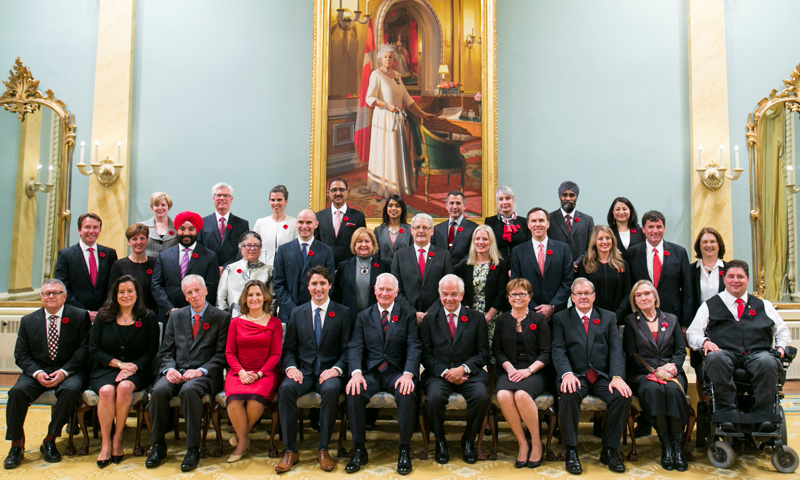 One of the most profound social implications of Justin Trudeau and the Liberal Party victory in the recent Canadian election can be summarized in a single word — diversity.

The ramifications of this unprecedented political development are not to be overlooked. Within this scenario, the most topical issue is the establishment of “gender quality” in government, whereby our freshly minted Prime Minister created his cabinet based upon an equal representation of men and women. This in itself, however, does not reveal the full picture.

Much fanfare has also been made of the placement of a handful of so-called minority Canadians within Trudeau’s cabinet, as well as much ethnic community excitement regarding the addition of Sikh, Moslem and Aboriginal candidates to Parliament.

As can be expected, Canada’s mainstream media has been responsible for much of the hoopla, filling our major news publications with the virtues of these accomplishments, as well as informing readers of how the situation best exemplifies democratic tradition within our nation.

Is this really the case? Are Canadians really best served by these post-modern standards as introduced by Justin and company? As with most issues related to political correctness and multiculturalism in Canada, the closer one looks, the more things are not as they appear.

Democracy is not an indestructible form of government. As with any political system or ideology, it must be maintained, and even protected, from contrary or opposing political developments. In order to maintain democracy, a certain degree of vigilance is required. Historically speaking, the world has witnessed many cases of governments and nations transitioning from one particular brand of leadership to another. Most often, these changes begin with a tiny step, or seed, which serves as a catalyst for future political transition.

Could Prime Minister Trudeau’s diversity initiative be such a catalyst? At this early stage, we do not know. However, one fact which cannot be denied is that the decision alters the nature of democratic process in Canada in its purest form. Yes, the cabinet consists of parliamentarians who won their ridings based on receiving a majority of votes. However, is it truthful to proclaim Trudeau’s cabinet has been created based solely upon the principle of choosing the best man or woman for the job?

Will the diversity issue be limited to gender? If visible minorities too are engineered into office, then Euro-Canadian politicians are going to be engineered out of office.

In addition, who is to say the diversity issue will be limited to gender come the 2019 federal election? Given that mass immigration continues to dramatically alter the demographic make-up of our country, the chances of the “diversity quota” applying not only to gender, but also to ethnic minority advancement within government, appears to be an inevitability.

In typical fashion, Canada’s multicultural advocates are licking their chops at the thought of this scenario. Basing their claim on the idea that government bodies should reflect the ethnic demographics of the country, Canada’s pro-immigration and multicultural pundits believe they have found a magic bullet to shift the power structure within our society. They omit, however, the fact that our nation’s immigration and multicultural policies were never endorsed or approved by the Canadian people. This means, in effect, that the most socially transformative policies in our nation’s history are non-democratic in nature.

Even more suspect, however, is the thought that this form of social engineering will result in members of one identifiable community being engineered out of government. Here, we are speaking of Canadians of European heritage. After all, there are a finite number of seats in Parliament — 338 at present. Therefore, logically speaking, if “ethnic” politicians are engineered into office, then “non-ethnic” politicians are going to be engineered out of office.

Is this the model of diversity which the founder of multiculturalism, former Prime Minister Pierre Trudeau, envisioned when he introduced the concept to Canada in the early 1970’s? Don’t think so. Besides, the truth is, multiculturalism is not and has never been an equitable policy for all Canadians. How could it be, when just under one billion dollars a year are taken from a heterogenous tax base and handed on a platter to our largest, wealthiest, and best politically organized ethnic communities. Furthermore, after three decades of mass third world immigration, these communities are no longer true minorities. Indeed, upwards of forty ridings, and possibly more, out of a total 338, are minority Caucasian ridings.

Still, the diversity propaganda continues to run roughshod over the collective consciousness of our nation. Has no one noticed the transformation of our major urban centres and suburban communities? Yes, in terms of the entire national population, White Canadians are still a majority, however Statistics Canada informs us that by 2031, Whites will be minorities in both Toronto and Vancouver. Yet, if the status quo remains, the Chinese, Islamic, and Sikh communities will continue to receive billions of dollars for promoting the cultures of the nations from which they came, while our pending European-Canadian minority receives next to nothing. Fair? Equitable? Not a chance.

The fact is, third world immigration to Canada has become an industry unto itself (see here and here). And not your average industry, but a privileged industry on the receiving end of approximately 90 million dollars a month for the purposes of importing the third world into Canada. Not exactly in line with the minority “victimhood” belief system which has permeated Canadian society via media and government.

Canadians need to smarten up. Historically oppressed minorities are nothing of the sort today. Is the present residential real estate fiasco in Vancouver — now proven to be a result of foreign money — a sign of prejudice against an “identifiable” community? If it is, that group could only be Canadian-born residents, who can no longer afford to by homes in the city in which they were raised.

Diversity is a dangerous game. If left unchecked, our nation will continue along a path to a full societal inversion, whereby the only community sanctioned to be marginalized — as well as publicly condemned — will be the European-Canadian community. With the establishment of diversity in government, we may well be witnessing the first steps along a path of political and social transformation unimaginable a generation ago.