Douglas Saunders: Muslim Immigration Is Good for the West 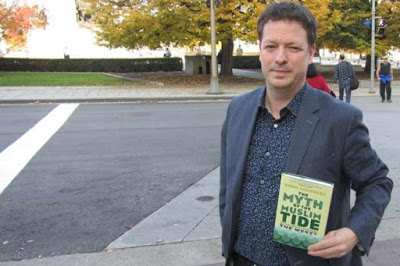 Islamic immigration is an issue of grave importance to all European nations including those beyond the borders of continental Europe such as Canada. Currently this is more of an issue for Western Europe as sadly this region has a growing Muslim minority which is already making its presence felt in terrible ways. Even worse is how the media does little to discuss the negatives of Islamic immigration — or mass immigration in general. Many journalists are staunch supporters of Islamic immigration. One such example is Douglas Saunders.

His twitter feed is filled with arrogant liberal signalling; attempts to show just how much of a social justice supporter he is. He believes Western values should no longer be called “Western” because apparently that makes them harder to implement in non-Western countries like China. Evidently the truth will not set you free! The Chinese communist party is hardly likely to give into demands for democracy if we were to call it a “human value” as opposed to a Western one. He is especially sure to show off his unreserved support for immigration, even going so far as to call for the US to accept Spanish as an official language. One of his favourite topics is Islamic immigration and he has written several articles on the subject and one book entitled The Myth of the Muslim Tide.

Back in 2013 Saunders went so far as to say that England’s ethnic problem lay with its indigenous populace. Of course he fails to note how White children are being left behind in favour of foreigners, or the mass rapes of White girls by Pakistanis in a whole host of municipalities but most notably Rotherham. He also does not mention how more non-Whites feel British than natives, most likely due to the fact that the government is favouring foreigners to natives. There is also no mention of how the 2011 England riots were started by blacks after the death of an Afro-Caribbean criminal in London and nor is there any mention of how the north of England has undergone serious economic hardships since the 1970s and no government has truly attempted to solve this issue; instead they all focus on the financial centre of London. To round things off, he ignores the crippling economic effect of immigration. In true ignorant leftist fashion he compares the libertarian UKIP to a violent racist organization.

Since then he has written some equally ridiculous posts concerning Islam. In one he went so far as to blame the Black Hand terrorist organization for ISIS. The Black Hand were a Serbian nationalist group who wanted to create a ‘Greater Serbia’ and felt the assassination of the heir to the Austro-Hungarian throne, Franz Ferdinand, would be conducive to such a cause. As we all know this assassination was successful and caused Europe to descend into the suicidal First World War. For all its faults the Black Hand did not enslave, rape, douse enemies in gasoline and set them on fire, or otherwise mutilate people as ISIS has done. ISIS is a strict Islamist organization, and it and fellow travelers are not descendants of the Black Hand. Saunders unfounded comparison is typical of White liberals who are disgusted more in their heritage than in the atrocities committed by Muslims. And like any good self-hating White internationalist in his article about the Black Hand, Saunders compares nationalism to a disease and he uses the phrase “imaginary nation” to refer to homogenous nation-states, a term invented by academics dedicated to the destruction of European ethnic and national identity. Saunders praises the ability of Muslims to integrate into Western society and like many on the left he has even tried to compare the current movement of Muslims into the West to the movement of Catholics into Protestant countries like Canada and the United States in previous centuries. Many on the left try to shoo away the Muslim issue with such false deductions based on a limited understanding of human history and diversity of cultures.

One thing I have noticed as a young man who has actually grown up amongst Western-born Muslims (unlike many of the liberal “experts” discussing the Muslim issue) is that Muslims pick and choose how they integrate. They often have the same accents, often wear Western clothing, drink, smoke, swear and generally look and act very unreligious. However that does not dampen their commitment to their cultural traditions including Islam. I got into several arguments about how secularism included all religions and Islam should not somehow be treated better than other faiths; including our native Christianity. I also knew of Muslim men who viewed women who didn’t wear hijabs as whores. I knew several who seemed like your average bleeding-heart SJW but the causes they cared most about were ones involving Muslims as victims and non-Muslims as victimizers (Palestine, Kashmir, etc.) but never ones where Muslims were in both positions (Kurdistan, etc.) or where Muslims were abusing non-Muslims (Assyrians, West Papua, etc.).

Sadly far worse things have been said and done by Western born Muslims. The Rotherham scandal is but one of many incidences of Muslim (in the case of Britain primarily Pakistani) men targeting vulnerable White girls. In the case of Rotherham there was at least one father denigrated by the police for trying to defend his daughter. Brutality used by Muslims rape gangs to keep victims quiet in Rotherham, Telford and countless other places included threatening their families and torturing the poor girls; in one case a girl had her tongue nailed to a table. The vast majority are 2nd or 3rd generation. They may be more likely to adopt trappings of Western culture but that doesn’t mean they refuse to stop dogmatically following old cultural ways; they only appear to be integrated.

Yet Saunders has the sickening mentality to excuse these rapes on the grounds that Protestants and Catholics committed crimes 500 years ago!

Muslims continue to promote acid attacks and honour killing and these issues aren’t addressed, even when indigenous Whites are targeted. Not that we should be surprised the elites wouldn’t care about Whites given how persistent they are in attacking White people and heritage. Whites are the only indigenous people to Europe and yet the decolonization and indigenous rights crowds are silent on the issue of population replacement in Europe due to high immigration and birth rates of Muslim women vs. stagnant birth rates of Whites.

Most journalists are left leaning and most come from well-to-do families: champagne socialists who care only for themselves and others in their position. As such journalists have proven to be a leading force in the lack of knowledge concerning Muslims in the West. Any criticism no matter how minor is met with charges of “Islamophobia.” Politicians and supposed human rights activists are just as willing to sink to such depths. Scott Shane of the New York Times tried to convince readers that right-wing (i.e White) Americans are a greater threat to national security. However he forgot to mention that he had to discount 9/11 and not to mention that Muslims are a minority so attacks by them are actually greater (0.9% has killed 26 people since 9/11 while 63% has killed 48). Soon after that article was published this happened. Yeah, liberty loving White Americans with right-of-centre views are the real threat to American society. Whenever a Muslim attack occurs such as the Paris attacks, Chattanooga or 7/7, Madrid train bombings, murder of Lee Rigby, or even the Charlie Hebdo shooting when fellow leftists were targeted, the left does its best to convince us that these are random events which aren’t done by real Muslims. After the Sydney siege the left totally changed the issue from one of Islamic extremism to an imagined backlash of Australians.

Censorship about immigration and Islamic immigration is official in Sweden and is going that way throughout the rest of Greater Europe, including Canada. Fact is mass immigration is a hindrance and no one cares to do anything about it. Muslims are particularly aggressive not just in the physical sense of raping women, but also in how they are increasingly bold in pushing their faith and customs. Many parts of Europe — like the UK, France, and Sweden — have no-go areas where Whites are met with violence and other forms of intimidation. The local police and Christian clergy are met with threats. Even racial fellows who aren’t Muslim are treated terribly.

Homophobic attitudes, a rejection of religious pluralism, democracy and human rights are all far higher amongst Muslims. Is that what Saunders really wants? Is that what the left really wants? These people have their heads firmly in the sand. The media is dominated by affluent limousine leftists and this trend does not seem to be letting up. In fact it seems that our situation becomes worse and worse as the media becomes more and more extreme in its cultural Marxism and anti-Western outlook. People like Saunders care not that they are getting heavy criticism for their masochism. They claim to be about democracy and free speech but then go out of their way to curb these things when it doesn’t work to their favour. This is perhaps the most heinous aspect of the left. Multiculturalism and third world immigration were both imposed upon us completely unilaterally. And it is obvious that a great number of Europeans are concerned with the impact of Islam. For example a majority of Germans feel threatened by Islam, while in Britain a petition to ban the building of mosques has already gained more than 9,000 signatures, and most have stated they do not want Muslim migrants from Syria entering Britain.

Like so many on the left Saunders has supported an influx of Muslim refugees, but of course he totally refuses to mention this or this or this or this. He attempts to wave off such issues by comparing the current crisis to earlier crises. The problem is that there are plenty of incidences involving legal Muslim migrants that one is left wondering why poor refugees would be any different. He also ignores the fact that most “refugees” now are young men, and the Kurdi family had been living safely in Turkey for three years. His comparisons with former crises are different considering these involved far smaller numbers of largely non-Muslim individuals; and the fact that we have let communists settle here is not something to be proud of. Yet another attempt at using sentimentalism and faux-morality to force Canadians to accept something they neither need nor want.

Leftists and especially those in the media in good cultural Marxist fashion, they feel no connections to their Western heritage. They also feel no compassion for their own people nor care what their views are on the subjects of immigration, multiculturalism and Islam. Of course their status means they will never have to experience the horrors mentioned above. Instead they go out of their way to browbeat the rest of us into submission with false comparisons and sentimentalist nonsense. Too bad Saunders and his like don’t have to experience the effects of immigration first-hand as perhaps that would wake them up to the dangers most ordinary Europeans are aware of.