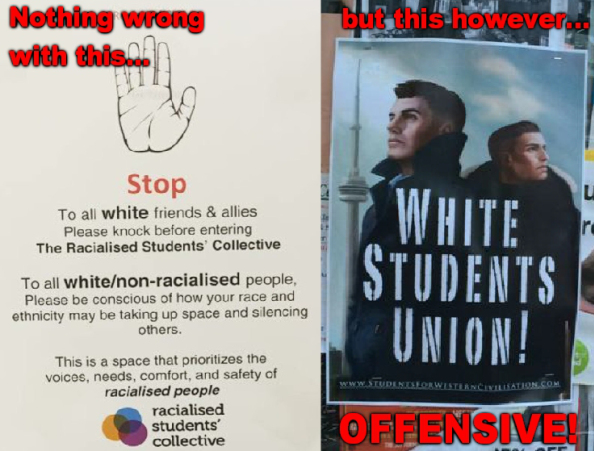 Canada was the first country in the world to enact an official policy of multiculturalism, and for many Canadians, that policy is a source of identity and national pride. We were the first in the world to make the sacrifices and take the risks of attempting this social experiment and many feel that it is a just and noble endeavour.

“White supremacy” is the complete antithesis of multiculturalism. When the typical Canadian hears the term “White supremacy” he or she thinks of a totalitarian regime like Nazi Germany where soldiers in jack-boots march through the streets and non-White people are systematically persecuted.

This is why it is so insulting that academics at our government funded universities are teaching that multicultural Canada is actually a “White supremacist” country. To the vast majority of Canadians, such an assertion is absurd. After all, since it was enacted, Canada’s multicultural immigration policy has reduced the White population from 96% to 70%, and it is predicted to reduce us to a minority in the coming years. That would be some horribly incompetent policy-making if the aim were “White supremacy”.

How could anyone possibly advance such a ridiculous position?

In order to make this claim work, academics have had to completely redefine the term “White supremacy” in a way that makes it unrecognisable to most people. In calling Canada a “White supremacist” country, academics don’t mean that Canada is a country like Nazi Germany; what they mean is that, within Canada, White culture is “supreme”, “systemic”, and “institutionalized”. That is, Western Civilisation is interwoven into the very fabric of what Canada is: our two official languages are European languages; we have a European legal system which is built on European philosophies of life and government; we have European architecture, European technology, European Holidays/Festivals, and not to mention, there are White people everywhere — in business, education, government, media etc. And this, according to the dominant ideology in our universities, is a problem. It is in this sense that academics call your multicultural Canada a “White supremacist” state.

What they are effectively saying is that the mere presence and existence of European/Western Civilisation is White supremacy. As White people/Europeans, our cultural and political existence is, in and of itself, a form of racism, and therefore, a moral wrong.

Instead of “White supremacy” sometimes Western Civilisation is referred to as “White hegemony” or “Whiteness”, but the conclusion is always the same: the West must be destroyed by way of “deconstruction”, “dismantling” or “decolonization”.

On its own, the fact that weird, extreme or apparently crazy perspectives find expression in our universities is nothing new or inherently outrageous. The very purpose of a university is to function as society’s laboratory for the testing of novel ideas and the retesting of old assumptions. However, what is the cause for outrage is the fact that this mandate is not being fulfilled. When it comes to the study of culture and ethnicity, this narrative of “White supremacy” goes unchallenged, because dissenting perspectives are categorically and systematically oppressed.

Case in point: Students for Western Civilisation was formed at York University in 2014 as a platform for White/European students to challenge those arguments about the inherent illegitimacy of our civilisation’s existence. Our first attempt to spark the discussion was in the form of an article we sent to York’s official student newspaper, Excalibur. Without explanation they refused to publish it. Our second attempt was on September 14th of this year when we conducted a poster campaign at Toronto’s three major universities York, Ryerson and the University of Toronto. The posters stated “White Students Union!” and the name of our website “StudentsForWesternCivilisation.com”.

All of our posters were immediately taken down by the school administrations.

Ryerson’s spokesman Michael Forbes said about us, “I can confirm they’re not a sanctioned club. We don’t condone this sort of thing.” By “this sort of thing” Forbes was certainly not referring to clubs based on ethnic or racial origin, because all three universities have such clubs. Ryerson, the university that Forbes represents, has the

Ryerson even has an anti-White, Everyone-But-White-People Union called the Racialized Students Collective which made news in March for banning White students from its gatherings. And yet Forbes says that the idea of a group for White students is “offensive”.

Forbes said that if we had applied for formal group status on campus we “would have been rejected”.

The poster campaign and its response that followed made headlines throughout Canada. The vast majority of reader comments supported us, but, within the universities and the media, many condemned and attacked us with arguments built on this new narrative in which “White supremacy” is understood as the mere existence of Western Civilisation.

The York Federation of Students released a statement saying that:

Academia and our post-secondary institutions are filled with institutional racism, white supremacy and misogyny that continue to reproduce as marginalized students learn to navigate through campuses that weren’t built for them in the first place…What now is being termed “western civilization” is nothing more than colonialism.

The posters were calling for a system of oppression [Western Civilisation] to perpetuate. We’re constantly pushing against white-centric voices just to be heard… If you look at our governing council at the University of Toronto, you’ll mostly see older white men. Their voice is being heard enough.

University of Toronto’s Student paper quoted Khan as saying that a White students’ union is an “inherently racist concept”:

In Toronto, racism doesn’t only just look like overt name-calling, harassment, and discrimination. What racialized folks often have to further navigate through are the subtle expressions of racism, dominance and White supremacy that we encounter on a daily basis.

Khan added that, at University of Toronto, it is predominantly White people who occupy positions of authority and that conversations about the ramifications of this power structure need to be held accountable. She said:

[This power structure] thrives off of upholding practises of white culture, while isolating students who choose to resist conforming to standards and practices of performative whiteness.

[This] conversation of subtle racism, dominance and white supremacy is incredibly necessary at the very least.

CanIndia quoted a Toronto student who regurgitated the lessons of her professors:

Putting up white student union posters is just a way to remind white people about their supremacy or dominance over other ethnic groups.

Racism is what Canada and America were intrinsically built on. But, perhaps the only hilarious thing about the existence of racism is the fact that the people who created it and who benefit from it the most, want to convince us all that they are truly the biggest victims in a society that systemized their supremacy, coddles their fragility and enforces their privilege.

It has become en vogue for prejudiced White people to embrace persecution, even when Whiteness thoroughly permeates every aspect of our society.

For those of us who believe in social equity, the real challenge is in spotting the subtle, mundane expressions of white supremacy and dominance that are all around us. In fact, I would go as far as to call it an indisputable historical fact that Western civilization is built on a foundation of slavery and exploitation.

Our organization is called Students for Western Civilisation, but the Gateway’s Kassidy Auld mockingly referred to us as “Students for White Supremacy”, because, of course, in the environment in which she was indoctrinated, they are one and the same thing.

The response that we received was entirely what we expected. Indeed, our organization was founded because of our awareness that such enmity towards White/European peoples exists and because genuine discussion of this fact is so heavily oppressed. The response from the media and the universities only further underscores the assumptions upon which our organization stands, and therefore, vindicates our existence.

Students for Western Civilisation will continue to challenge the abuse of our university system by those who see it as a platform to incite hatred towards European Canadians and we will continue to give a voice to a perspective which, though it represents the majority of Canadians, is heavily oppressed and silenced by a dogmatic minority that fears free speech and open debate.