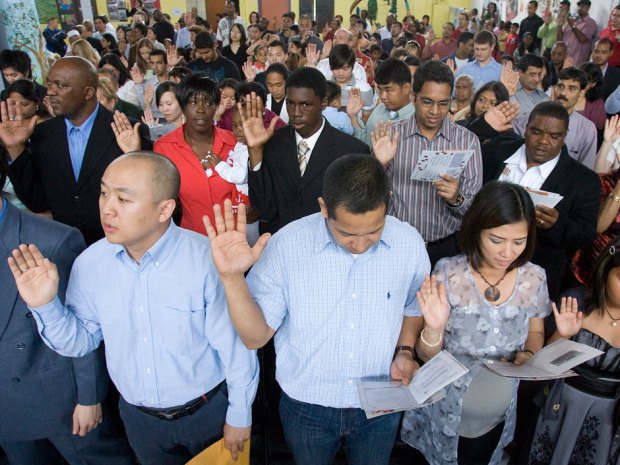 On October 19th Canadians will be voting in our next federal election. In accordance with our established tradition the party that wins the most seats in the House of Commons will be asked to form Her Majesty’s next government and its leader will become our next Prime Minister. Several issues have been raised in the unusually long election campaign but, as in all previous elections of the last several decades, there is one issue that has not been raised despite its being of paramount importance.

That issue is immigration. It is not an election issue for the same reason it has not been an election issue in previous elections — no party dares raise the issue for fear of being labelled racist. The fear is a well-founded one because ever since the Liberal Party introduced our present system of immigration in the 1960s our public broadcaster, the CBC, and the private media companies that, thanks to broadcast regulation agency, the CRTC, are more echo chambers of the CBC than its competitors, have all levelled that accusation against anyone and everyone who dares point out the flaws in that system.

The Pseudo-Debate on Refugees and Absence of Immigration Caps

Wait a moment, you might be saying, hasn’t immigration become an election issue through the Syrian refugee crisis and the death of Alan Kurdi.

No, it has not. The leaders of all the parties have tried to turn Kurdi’s death into political capital by promising to resettle large numbers of Syrian refugees here or by accusing the present government of heartlessness and a lack of compassion in its response to the crisis, but nobody has raised the question of the flaws in our refugee policy which is itself only a part of our immigration and refugee system as a whole. Indeed, most accusations that have been made against the present government’s refugee policy condemn its strengths rather than its weaknesses. Our government is responsible, first and foremost, for the good of our own country and viewed from that light, the present government’s policy of giving precedence to refugee applications from groups that have been targeted by ISIS for persecution over the co-religionists of ISIS is basic sense. Only a deranged crackpot would think that it is more important for the government not to discriminate in its processing of refugee applications than for it to attempt to ensure that those it lets in are not agents of the group that is turning people into refugees overseas.

Thirteen years ago Daniel Stoffman addressed the real problems with the way we take in refugees in the seventh chapter of his book Who Gets In.1 He pointed out that there are two kinds of refugees whose applications we approve — those we find in refugee camps overseas, and those who show up here claiming to be refugees. The latter outnumber the former by far and, despite the fact that only a small percentage of this kind are really fleeing for their lives and of these most have arrived at a safe place already before coming here, we approve the vast majority of these applications. The absurdity of this can be seen in all those we have accepted as “refugees” who return to the country where their lives are supposedly at risk for visits and vacations. Stoffman explained the problem by saying that the Immigration and Refugee Board has a preference for those who come here to claim refugee status over those we find in refugee camps because the former are the bread and butter of immigration lawyers, consultants, and the IRB itself. The really ugly side of this is that most of the funds allocated to help refugees each year do not go to actual refugees. After the annual target became required, for about ten years it varied yearly in accordance with the economic conditions in Canada. Then, in 1986, the Mulroney government raised the target to the unprecedented high number of 250,000. It remained that high for the duration of Mulroney’s premiership, no longer tied to our fluctuating economic conditions and needs. When Chretien came to power he jacked the target up even higher to one percent of Canada’s population which would have been just over 300,000.2 The target for this year is between 260,000 and 285,000 people.

At no point did any of these governments go to the electorate and ask for a popular mandate for setting immigration levels so high. They would not have received one had they done so. Opinion polls have fairly consistently shown that most Canadians think immigration levels are too high, that the government needs to do a better job of policing who gets in, and that immigration should not be allowed to radically alter the country’s demographics.

Now just to be clear on this point, it is not always wrong for a government to go against the wishes of the majority. Contra modern democratic ideology, it is to accomplish the common good and not the will of the people that governments are established. As an old-fashioned Tory I would insist that where the common good and the will of the people are in conflict the government should seek the former and ignore the latter. There is a rather obvious reason, however, why this does not apply in this case. Since the end of the post-World War II baby boom, fertility in Canada as in other Western countries have dropped below the level required for population replenishment and has remained low since. While this is part of the reason the Mulroney, Chretien, and Harper governments have kept immigration high — to keep the numbers of the taxpaying workforce up for economic and fiscal reasons — the combination of low fertility and high immigration over an extended period adds up to a policy of population replacement. Left-wing German poet-playwright Bertolt Brecht, in his poem The Solution, a commentary on the East German government’s use of force to crush an uprising in 1953, wrote:

Would it not be easier
In that case for the government
To dissolve the people
And elect another?

This is what a policy of using immigration to make up for low fertility does. Which is why such a policy ought to be brought before the electorate. While the modern idea of the will of the people is a deadly and dangerous “armed doctrine” the people certainly have a right to be consulted about their own replacement and when elected officials and bureaucrats seek to replace Her Majesty’s freeborn subjects without their consent they are working against, not for, the common good.

To dissolve the old people and elect a new one was clearly the intention of the Liberal governments that comprehensively overhauled our immigration system in the 1960s and ’70s. When, in 1967, the Pearson government passed the Immigration Act that introduced the present system in which those applying to immigrate to Canada are awarded points towards their acceptance based upon such things as their education and ability to speak English or French, they and their supporters in the media and academia declared it to be a “fair” system. The older immigration policy that had prevailed since Confederation under Conservative and Liberal governments alike, of encouraging immigration when needed but only such immigration as would not radically alter the ethnic and cultural composition of the country, they declared to be racist. Their own policy, however, was not as race-neutral as they made it appear to be on paper.

At the time, prospective immigrants were required to apply from outside Canada. Their applications would be processed by our visa officers stationed in our consulates and High Commissions. After Pierre Trudeau succeeded Lester Pearson as leader of the Liberal Party and Prime Minister of Canada in 1968, he “began the quiet transfer of visa offices from traditional source countries to the Third World”.3 In 1976 the Trudeau government passed an Immigration Act that came into effect in 1978 and which created different classes of immigrants, allowing those sponsored by relatives already in Canada to bypass the points system. Since Third World families tend to be much larger than those in traditional source countries the combined effect of Trudeau’s actions has been a radical transformation of the ethnic composition of Canada’s large cities where most of the immigrants settle.

There is no way this result could have been anything other than intentional. Furthermore, it is far more indefensibly racist than our original immigration policy was. In a sane day and age, a government would not be required to justify a policy aimed at keeping its country’s ethnic makeup the same. It is the government that seeks to change it that should be made to give account for its actions. To deliberately set out to change your country’s ethnic composition is to commit a form of aggression against your own people.

The only way this matter will ever be brought to a vote is if one of the parties breaks with the consensus of the others and makes it an election issue. Despite there being plenty of reasons for the Conservative, New Democrat, and Green parties to do so, none seem to possess courage enough to weather the accusations of racism that would come their way if they did, and so immigration remains the election issue that wasn’t.

[1] Daniel Stoffman, Who Gets In: What’s Wrong with Canada’s Immigration Program — And How to Fix It (Macfarlane Walter & Ross, 2002): 151-174
[2] The Liberals claimed in their 1993 Red Book that the target had already been one percent of the population for the previous decade. Charles M. Campbell demonstrated this to be untrue in Betrayal & Deceit: The Politics of Canadian Immigration (Jasmine Books, 2000): 13-14
[3] Ibid. 7