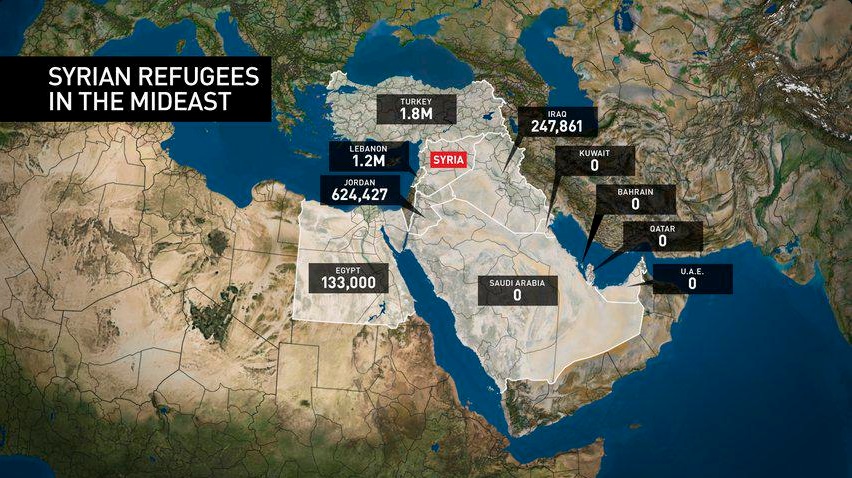 There is, however, little doubt that many within our society are at odds with this statement. They argue Canada is by and large a “compassionate” country, and that it is therefore reasonable to expect Canadians to support a substantial intake of those affected by the war in Syria.

What is less reasonable, however, is the current perception that Canada is somehow responsible for the crisis — or if not directly responsible, at least culpable by way of a modest refugee intake quota. In particular, it should be expected that our politically correct, pro-multicultural contingents would adhere to this belief system. A prime example among these minions is “No One Is Illegal”, an organization which espouses the idea that Canada should be an “open border” nation, whereby anyone can enter our country — thus rendering the concept of citizenship meaningless. Minister of Multiculturalism Jason Kenney, commenting on the organization and its leader Harsh Walia, recently referred to the group as “Trotsky-ite”. Clearly, even this staunch promoter of mass immigration to Canada is not a fan.

As it happens, the aunt of the young refugee child who tragically perished as a result of the conflict resides in Canada. Quoted in dozens of Canadian publications was her statement that “the world is responsible”. While her grief is understandable, and may have resulted in a statement based on pure emotion, international responsibility for the crisis is a controversial and provocative topic. No, the world is not responsible, and neither is Canada. Blaming our government, our Prime Minister, or our citizens is misguided. When assigning blame, it should be directed toward the perpetrators of the crisis — the nation of Syria, its President and most of all, Islamic State, or ISIS, as it is commonly known.

The oil-rich Arab countries and Iran refuse to accept the Syrian refugees their sectarian proxy war has displaced. Then why should Canada which is not responsible for their plight take in scores of them?
Simply put, the refugee debacle is a Middle Eastern problem — therefore it should be dealt with first and foremost by Middle Eastern nations. On this topic, it is most interesting to note the various responses from these nations. How many refugees have the Gulf States taken in? In fact, so-called “brethren nations” of Syria: Saudi Arabia, Kuwait, Quatar and others have not accepted a single refugee. What gives? Why aren’t these oil rich, co-religionist nations helping their suffering brothers-in-arms?

The main reason is — they do not have to. It turns out that none of the Gulf Nations signed a document called the “1951 U.N. Refugee Convention” — therefore they are exempt from accepting refugees into their nations. How fortunate for them. Consider this: These Sunnite oil sheikdoms are actively fuelling the conflict with weapons, matériel and fighters worth billions of petro dollars, yet they decline to accept the stream of refugees their proxy war with Shiite rival Iran has been creating. Not even a single refugee. Is this how the burden should be shared internationally?

How have Canadians responded to the fact that these neighbouring Islamic nations are refusing to accept these pour souls? The answer is: they haven’t responded at all because they have no knowledge of this essential component of the equation. Reason being, our mainstream media sources have yet to reveal these facts. What has been revealed, however, is a plethora of commentary criticizing and condemning our country, Prime Minister Harper, and Minister of Immigration Chris Alexander, implying these entities are somehow responsible for the death of the young refugee child.

What about the reaction from other neighbouring Islamic nations — for example, Iran, which has long been secretly sending combat troops to support its ally Assad, thus fanning the flames of the sectarian conflict? President Hassan Rouhani of Iran is very concerned — so concerned that he has the nerve to say that European countries have a “humanitarian and historic duty” to take in the refugees! Meanwhile, Iran continues to decline to accept Syrian refugees herself. The moral double-standard is blatant.

In light of the bigoted reaction from Middle Eastern nations, several thought-provoking questions are in order. Are Western nations being hoodwinked by militant Islam? Is this situation, in fact, a strategy to disseminate followers of Islam throughout the democratic, and mainly Christian, nations of the world? Considering the extremity of militant Islamic ideology, this idea is not of out the question.

In the meantime, all skepticism within our nation has been washed away by a political tide of altruism for those lost in the whirl of the crisis. While admirable in many respects, it is arguable an element of manipulation exists on the part of those indulging in the “blame game” — organizations such as “No One Is Illegal”, and others such as Ontario-based Lifeline Syria.

With a federal election on the horizon, it is fair to suggest that political party opposition leaders and immigration critics are pushing the compassion button in order to secure votes — in particular, the votes within Canada’s twenty six ridings which are today majority “ethnic” communities. Such is the increasing relevance and power of the ethic vote within our country.

Can it be argued that Canadians are taking a superficial, or overly simplistic view of the refugee crisis? If so, it is not their fault. As with all issues related to immigration policy, there is more to the story than meets the eye. At present, what the eyes of Canadians are witnessing is far from a complete picture. The fact is, political correctness, candidate posturing and vote-pandering are playing a pivotal role in the general perception of the refugee crisis.

The refugee situation may well impact the entire world, however this does not mean the entire world is responsible. Until this is properly understood by the Canadian public, the Syrian refugee crisis will function as yet another weapon in the hands of Canada’s politically correct, immigrationist contingent.