Lifeboat Ethics: Why We Must Stop the Refugee Invasion 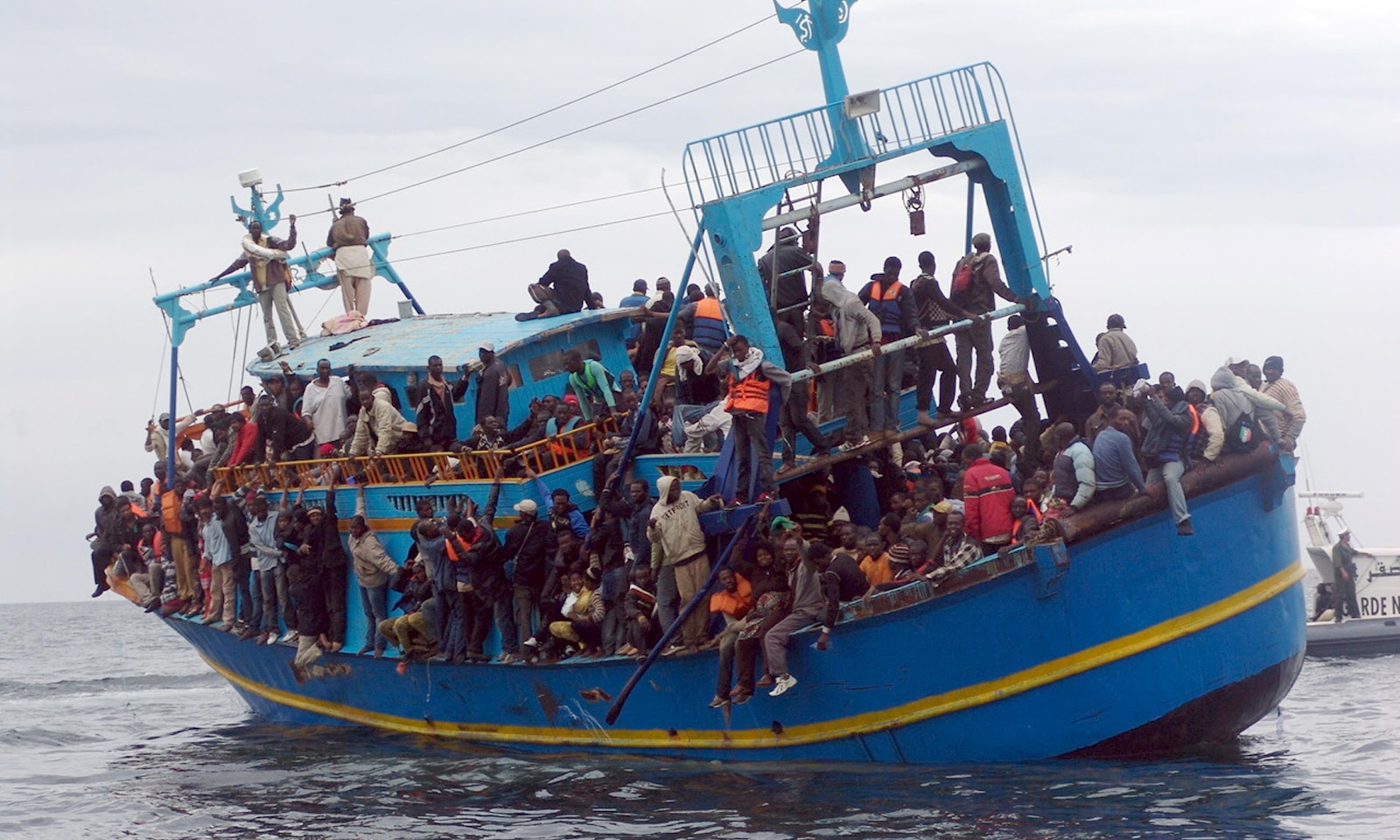 What Western countries need is a break from immigration, but instead our politicians are inundating us with waves of “refugees”. We are doomed if we continue to base our response to the migrant crisis on sentiment and emotion rather than facts and reason.

Imagine that you are on an ocean liner crossing the Atlantic. Your pilot is a historical re-enactment fanatic who, in a moment of drunken insanity, decides that the time is ripe for re-creating the sinking of the Titanic and rams the ship into an iceberg. Like everyone else on board you head to the lifeboats. You wait in line, they put you on board a lifeboat, and when it is full lower it onto the sea.

From the safety of your lifeboat you watch the ship go down and realize, to your horror, that something has gone wrong with the evacuation process. A panic has broken out and in the irrational frenzy of that panic several of the remaining lifeboats have been damaged and rendered useless. There are no longer sufficient lifeboats to carry everyone on the ship and people are jumping into the ocean and desperately swimming towards the ones already afloat, including yours.

You are now faced with a dilemma. You know that your lifeboat has a limited carrying capacity. If you let more people onto the lifeboat you risk running out of the lifeboat’s resources before being rescued or, worse, capsizing the lifeboat. If that happens, you will have not only have failed to save the people you pulled from the ocean, but will have needlessly killed yourselves in the process.

American biologist and ecologist Garrett Hardin first posed this dilemma in an article for the September 1974 edition of Psychology Today entitled “Lifeboat Ethics: The Case Against Helping the Poor”, the awful subtitle of which, added by the editor without the author’s approval, misses the point completely. Wealthy countries, Hardin argued, like lifeboats have limited carrying capacities and therefore taking in masses of immigrants from poorer countries will not solve the problems of poor countries but will only sink our lifeboats, metaphorically speaking.

Hardin’s article is timelier today than when it was first published forty-one years ago. For weeks now the most important international news item has been the horde of migrants evacuating Syria and flooding into Europe claiming to be refugees from the war that has ravaged that country and from the terrorism and tyranny of ISIS. The better informed among us know that this is only part of a much larger wave of migration from Africa and the Middle East into Europe that has been accelerating over the last year or so. The television and newspaper media have manipulated this story in such a way as to make us feel that Western countries are morally obliged to take in these refugees and they have been aided and abetted in this by irresponsible clergymen like the present Pope and by most of our politicians who seem to be competing with each other as to who will sink their country’s lifeboat the fastest. It is as if they were all acting out roles in a script written for them by Jean Raspail forty-two years ago.

In Raspail’s apocalyptic novel, The Camp of the Saints, an armada of one hundred ships carrying a cargo of a million of India’s poorest and most wretched, sets sail from Calcutta en route to the French Riviera. While many in France, including her president, can see the handwriting on the wall and know that if their country and civilization are to survive they must turn these invaders, armed only with their own plight, away, they lack the moral courage to do it, being paralysed by guilt induced by decades of liberalism. With the exception of a small handful of heroes in which the spirit of the old West lingers on, France succumbs to an invasion that is cheered on by her own media, politicians, and church.1

When Hardin first used the lifeboat metaphor his concern was a country’s limited supply of material resources. What Raspail’s novel illustrates is that there are more important things at stake in keeping our lifeboats afloat. Our customs, way of life, beliefs, laws, traditions, history, and our very identity are all more important than physical resources. Indeed, it is these things which make possible the conditions that are attracting all of these migrants from other parts of the world.

Our customs, way of life, beliefs, laws, traditions, history, and our very identity, all these things which made our societies successful and livable, are threatened
Laws which protect and secure our persons and property, a respect for personal liberty that allows us to thrive and prosper balanced with a sense of fairness and justice that demands that we collectively look after the weaker and less successful among us, with recognized, established, and, for the most part respected, civil rights do not just come about on their own. Whether these things draw immigrants for their own sake or for the sake of the abundance of material goods that these make widely available in our countries, we tend to think of them as being based upon universal, abstract, principles available through reason to anyone, anywhere, at any time. This liberal assumption, however, does not bear the scrutiny of history in which these things developed slowly within the context of national cultures that claimed the heritage of classical Greco-Roman antiquity and of Christendom as their own. Should those cultures go down with our lifeboats, there is not the slightest shred of evidence that these things would survive, and there is plenty of evidence that they will not do so in the failed states that were once thriving colonies of European empires.

Make no mistake — the sinking of our national lifeboats, and our entire civilization along with them, is the doom that we choose for ourselves if we continue to base our response to the refugee crisis on sentiment and emotion rather than facts and reason. It is not as if the refugees were pouring into a healthy Europe of countries confident in their traditions and identities. They are pouring into a Europe which has experienced decades of low fertility in which governments have relied upon large scale immigration to keep their population levels up, a pattern encouraged by the European Union that has developed over the same period of time. While a healthy country can take in and absorb a certain number of immigrants without harm to itself, for a country to rely upon large numbers of immigrants to make up for low fertility as a long-term policy is to adopt a policy of population replacement over reproduction which is to embrace its own death as a nation.

After several decades of this, what Western countries need is a break from immigration, but what our politicians are offering us instead is to inundate us yet further with thousands of migrants who claim to be refugees but are clearly behaving more like a mob of invaders. The British government has offered to resettle 20,000 Syrian refugees by 2020, with the opposition party and its supporters complaining that this is not enough. The governments of Germany and Austria have opened their borders wide to any and all claiming asylum. Even here in Canada, an ocean and half a world removed from the Middle East, each of the two largest opposition parties are vying to outdo the other in accusing the present government of culpability in the death of the three year old boy whom the media have been dishonestly presenting as a victim of Western heartlessness and in the tens of thousands of refugees they are promising to resettle should they win the upcoming election.

There are those, of course, who will insist that to think about preserving our national identities, cultures, and ways of life while other people are fleeing persecution and war is to show a lack of perspective and wrong priorities. They might further insist that the idea that we should not think only of ourselves but of others as well is the highest ethical principle of the faith at the heart of our traditional cultures and that to abandon that principle is also, in a sense, to lose who we are. While these objections should not be lightly dismissed, we must distinguish between moral principles themselves and the sentimental way in which some would apply them.

The Golden Rule tells us to “do unto others as you would have them do unto you” but as none of us in our right mind would want another country to take us in if it did so in such numbers that it lost everything that made us want to move there in the first place, this clearly does not contradict the logic of lifeboat ethics, whatever the current pretender to St. Peter’s throne has to say about it. Christianity calls upon us to follow the example of Christ, and that example is one of self-sacrifice for the sake of others, but a cross is something that can only be taken up individually, not collectively. It is one thing to throw yourself in front of a bullet to save another person. It is quite another thing to put your child in the way of the bullet and then later try to claim the laurels of a hero. To insist that out of humanitarianism and compassion we resettle this growing flood of migrants in Western countries is to be like the latter person, not the former.

Worse, as is the whole point of the lifeboat metaphor, it is to be like the man who credits himself for heroism for sacrificing his child but failing to stop the bullet.

Follow our ongoing coverage of the migrant invasion of the West.
[1] English translation of The Camp of the Saints (PDF), free to download