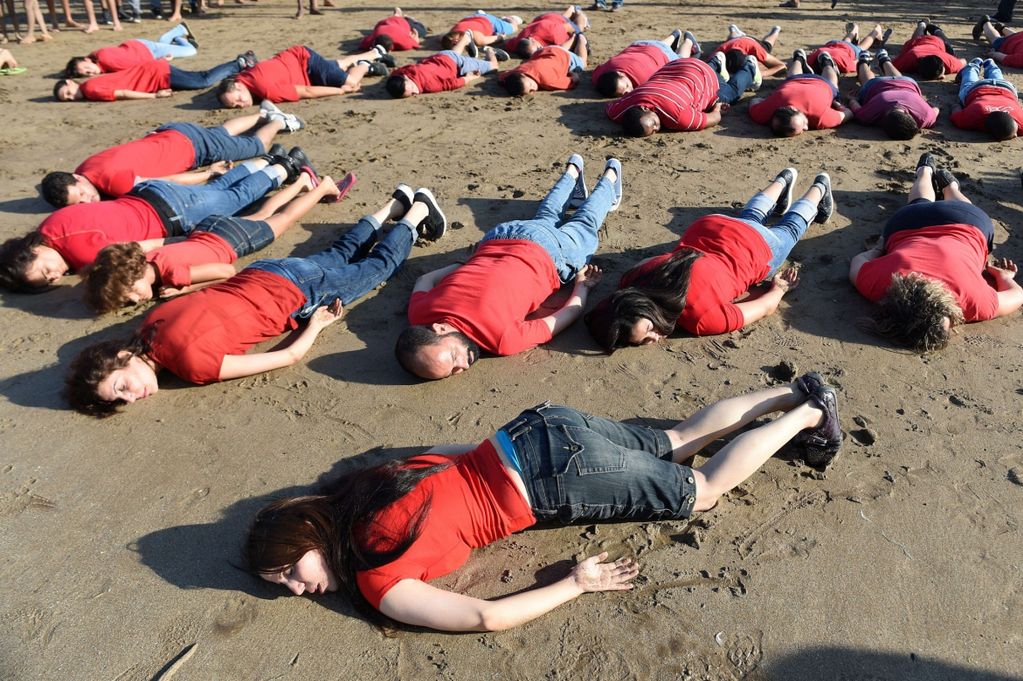 It is said that “a picture is worth a thousand words” and, like most familiar adages, there is much truth in this statement. A single picture is capable of conveying, instantly and powerfully, what it might take a long time and many words to get across verbally. Furthermore, pictures have the ability to speak to the emotions with a voice which drowns out that of the rational argument which speaks only to the intellect.

Pictures, therefore, are dangerous weapons in the wrong hands, for, like words, they can convey falsehoods as well as truths. Moreover, a lie spoken through a picture can have a lasting impact even after it has been exposed and that impact can be stronger than the words through which the truth is revealed.

The media recently treated us to an example of this as they splashed across our television and computer screens and the front pages of our newspapers the image of the body of a drowned, three year old boy, lying dead on a Turkish beach. Virtually every detail of the story that accompanied this image, even down to the name of the boy as initially reported, has subsequently been demonstrated to be at least partially false, yet its emotional impact continues to linger on, exerting a baleful influence on the Western world’s response to the flood of migration from the Middle East and Africa. Due to the sheer numbers involved, the situation calls for realism, cool heads, and long-term thinking, but instead, thanks to this picture, we are getting grandstanding gestures, reeking of sentimentality.

The death of a three year old is a terrible thing, of course, but it is not ordinarily world news, much less world changing news. The purpose of the highlighting of this story by the world media was to present a message, not about the boy himself, but about the wave of migration that is being called a refugee crisis. That message is that thousands of people, displaced by the war in Syria, will die like this young toddler, unless taken in by the countries of the West, as the victims both of the war and of Western heartlessness.

That is the message carried by the first stories that accompanied the image and which, due to the law of first impressions, is the message that endures, regardless of the countless subsequent retractions of the details of the initial reporting. This is a media technique that Professor Bruce Charlton calls “first-strike framing” in his recent book Addicted to Distraction.

There has been plenty the media have had to retract, or at the very least, redact, about this story. Whatever else Alan Kurdi might be a victim of, he is not a victim of either the war in Syria or Western heartlessness. His family had fled ISIS in Syria, yes, but they were already living in safety in Turkey. Nor, as it turns out, had they been turned away by the Canadian Ministry of Immigration, for, contrary to the initial claims of the father and aunt of the boy, the only application that had been filed had been for the boy’s uncle, Mohammed. Yet even if such an application had been filed and rejected, it could scarcely have contributed to the death of the boy, whose destination on this ill-fated boat trip was not Canada, but the Greek island of Kos. Indeed, from the testimony of the other survivors, it is apparent that the responsibility for the boy’s death falls squarely on his father, Abdullah, who has been using the soapbox the world media gave him to point fingers at everyone but himself. According to these other survivors he is a people smuggler and was driving the boat himself when it capsized.

Just as the story about the Kurdi family does not bear up under scrutiny, neither does the larger narrative about the so-called refugee crisis. While undoubtedly many genuine refugees have been created as people have been dispossessed and displaced by the war between the rebels and the Assad government in Syria, especially after the creation of ISIS and the wave of religious persecution that ensued, there is a world of difference between those who have fled to Jordan, Lebanon, and Turkey to escape immediate danger and persecution, and the hundreds of thousands, soon to be millions, flooding into Europe across the Mediterranean. To accept these indiscriminately, as the media, humanitarian organizations, leftist politicians, and bleeding heart clergymen demand, without making the vital distinctions between a true refugee and a migrant, and between a migrant and an invader, could only destroy our own countries. It would also do no good for real refugees as we would be letting in the kind of people they are fleeing from along with them and potentially recreating the conditions from which they are trying to escape in our own countries.

According to statistics gathered by the European Union, only about a fifth of those pouring into Europe are actually from Syria. Even more significantly, almost three quarters of these are men. Whatever their country of origin, it is from safe locations to which they have already arrived that they are flooding into Europe. All the evidence points to the conclusion that, contrary to the media narrative, what we are seeing is not the kind of emergency situation that demands a humanitarian response of immediate and unconditional acceptance of any and all claiming asylum but an invasion that must be repelled if Western civilization is to survive.

If progressives in the West are loathe to accept this conclusion, others elsewhere clearly see this invasion for what it is. How else can we explain Saudi Arabia’s offer to pay for the construction of 200 mosques for the migrants in Germany? Refugees are people forced out of their homes, looking for temporary asylum until it is safe to return. This project tells us that in the eyes of the Saudi Arabians, who have not offered to take in their fellow Muslims themselves, this is something much more permanent.

Those who are unwilling to accept this conclusion, inevitable as it is to those with the proverbial eyes to see, hurl against those who bravely speak the forbidden truth, such words as “racist” and “xenophobic” or “inhumane” and “heartless”. These are among the few words in our language that have a power comparable to that of pictures because they too speak to the emotions in a way that the words of a rational argument cannot. It is a power that is abused every time these words are spoken, for they cannot be used in good faith being accusatory words that pronounce their verdict upon the heart, known only to God, while denying the accused what in our legal and judicial tradition is a basic right, that of the presumption of innocence.

These words are weapons in the arsenal of the invaders for this is not a force armed with horses and bowmen, swords and spears, tanks, aircraft, guns and bombs. No, it has much more effective weapons than all of those. It is an invasion force like that described in Jean Raspail’s prophetic novel The Camp of the Saints, armed with our own liberalism and humanitarianism. Its chief offensive weapons, the swords against which we must quickly develop shields or perish, are our self-accusations of racism, and the picture of a drowned three year old boy.