What Do They Mean by “White Supremacist”? 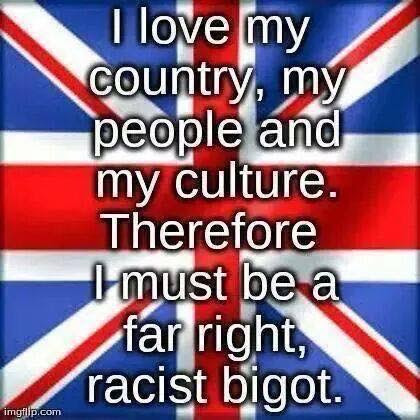 It has become fashionable to label anybody or any website which challenges anti-White racism as “white supremacist”. Of late, it has become among most frequently heard buzzwords — or buzz ‘phrases’ — particularly in the wake of the Charleston shooting.

“White supremacist” is a buzzword brandished as a weapon of fear and intimidation so as to silence opponents and prevent reasoned debates
But what does “white supremacist” actually mean? It used to be defined as the belief that the “white” race is superior to other races. But now it seems that, like so many English words in the history of the language, the meaning has evolved into something else. As it is presently wielded, the phrase conflates the belief in racial superiority with a belief in cultural superiority. Like the word “racist” or “racism”, it is brandished as a weapon of fear and intimidation with the object of silencing opponents. It is a show-stopper, a pre-emptive barb that is designed to prevent reasoned debate before it gets a chance to get out of the starting gate.

One need only say, for example, that a given article or a given speaker is tied to a “white Supremacist” website, and the content of the article or argument is dismissed without being examined or judged on the basis of its merits. One suspects that if anyone connected to such an odious cite made the claim that the sky is blue or that it frequently rains in Vancouver, his argument would be rejected out of hand.

That was certainly the experience of two people who were scheduled to meet with the House of Commons parliamentary committee on immigration to make a presentation. At the very last minute, the MPs on that committee cancelled the meeting because they learned that the presenters were connected to a “white supremacist” site. How shocking. These MPs must have been fragile creatures because, apparently, they couldn’t take the risk that they might encounter a persuasive argument. Besides, a politician must never pass up on an opportunity to play up to the ethnic peanut gallery by being seen to be standing up with sanctimonious outrage to racism incarnate. There are a lot of votes to be had from ethnic anti-White butt-kissing.

Anti-racist crusaders are astounded that anyone in the 21st century could possibly argue that some cultures are not quite up to snuff. In fact, one of the more conspicuous comments of the recently released report from “The Truth and Reconciliation Commission” was the revelation that native children in Residential Schools were taught to regard their own culture as inferior to ours. An unforgivable sin, especially in the era of Multicult. And my goodness, to think that there are still people out there who think that way! People who think that the truth trumps hurt feelings or self-esteem. People like me. Imagine that. I should be put away into a museum together with the Confederate flag. Or at the very least, kept away from children.

I plead guilty as charged. No, I don’t believe that my “race” is superior. But I certainly believe that Western or European culture with all of its warts is the greatest culture in human history. Period. In other words, I am “ethnocentric”. I am not a cultural or moral relativist. Big deal.

There are a lot of non-White people out there who feel the same way about their culture. Are Muslims cultural relativists? Are the Japanese eager to open the door to migrants who would threaten Japanese culture? Are Tibetans happy about the Chinese extermination of theirs? Not in your life. There are too many examples of non-White ethnocentrism to enumerate. The only question that needs answering is why other peoples’ ethnocentrism is kosher, while mine is not.

I do not see myself as a “white supremacist”, I don’t believe that my “race” is superior, but I neither believe that all cultures are created equal. I believe that European culture is the greatest. I am not a cultural relativist, I am ethnocentric.
I don’t believe that all cultures are created equal. Or at least, there are features of one culture that are better or worse than certain features of another. That, I suppose, in the PC lexicon, makes me a “supremacist”. What I find curious is that, typically, the people who hurl that label like a javelin at nearly-dead old white guys like me are quite prepared to anoint the cultures of non-White peoples as superior to mine. Canada’s Green Party leader, Elizabeth May, for example, observed that the Inuit are invested with an innate “wisdom” regarding ecological stewardship that white folks don’t have. That’s sounds pretty racist, don’t you think? Similar things are said about the Chinese. They are ‘smart’, and by implication, we are not-so-smart. Racism by any other name…..

I know how Cultural Marxists and race-baiters regard me. I know that they are incapable of defining their terms, or have any interest in doing so. I know that they employ their epithets because they cannot address my arguments. I accept that. I expect that. And I don’t care.

What is important is how I regard myself.

I do not see myself as a white supremacist. Rather, I prefer to think of myself as a white survivalist. And I use the term “white” in the same way that African-Americans and African-Canadians use the term “black”. It’s shorthand. In my case, it’s shorthand for “People of European origin”. I read the demographic writing on the wall and it says that “Whites” will be a minority in several Canadian cities very soon. So it is not about dominating anyone, but struggling to maintain an equal footing, or at the very least, avoid oblivion by being pushed off the plate entirely — or assimilated into a Third World melting pot. One critic said that he felt sorry for people like me. “The world must be a very scary place for them”, he said, with affected sadness. I hate to ruin his party but the world is a very scary place. And one of the reasons it’s scary is that the culture that gave the world so very much is on the brink of extinction.