Roots of Multiculturalism in America 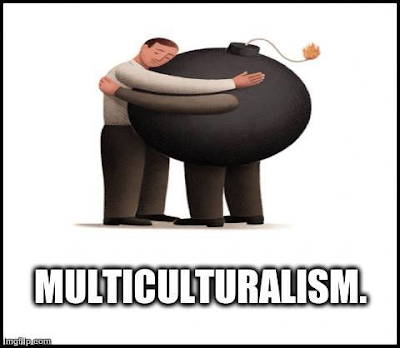 Multiculturalism and its origins form the subject of a tangled tale involving three major religions. But first we must go back a few steps — in fact, many steps. On the international scene, there are lies, deceits, betrayals, and horrendous slaughter, all of it explained by politicians who seem more like lunatics than genuine leaders.

On a slightly smaller scale, nationally, the United States is a society that is cursed by overpopulation, poverty, neo-Stalinist obedience to its leader, and the loss of its sense of identity as a country. Such comments apply not only to the US, of course, but also to Canada and various other nations. What is the long chain of causality between the international scene and the domestic one? What is the source of all this madness?

Let us then consider the fact that the American government persists in denying the obvious, every time a jihadist strikes — somehow the killer is not “really” a jihadist. He is merely a disturbed young man, or he does not represent “real” Islam — or something. What is the point of these denials? What purpose do they serve? Such rationalizations sound rather odd after being used a thousand times. Adding to the absurdity is the fact that US has an annual defense budget of close to a trillion dollars, but claims to have little ability to track down jihadists.

The jihadists and other Muslims are most certainly providing a distraction for whatever is going on behind the scene. What the jihadists are accomplishing is not what the average TV-viewer imagines. Yes, the plot is like a television spy story, or at least it’s as complicated as one, but it’s real, not fictional. In reality, the jihadists willingly participate in the destabilization of their own world.

Over the past few decades, the US has devastated many parts of the Middle East, and the main effect for the US has been the loss of billions of dollars that could have been spent more wisely. The country that has gained the most from all this destruction is Israel, which is now the most powerful country in the Middle East. The main enemy of Islam is Israel, not the US. Israel is determined to expand until it reaches from the Mediterranean to the Jordan River, and with every passing year it comes closer to its goal, although it has no moral or legal basis for taking this land. The US never complains, and in fact the US has virtually never opposed anything done by the state of Israel.

Israel has nuclear weapons, but these have never been put on the agenda of the International Atomic Energy Agency. Iran, on the other hand, has not opposed such inspections, and there is no evidence that it is developing nuclear weapons, but it is constantly treated as a major threat to world peace.

Now let us draw a little closer to the topic of multiculturalism. It is a well known (though rarely mentioned) fact that supporters of Israel control the US Congress and the banks. But they also control the news-media and the related entertainment industry, which means they control public opinion and public attitudes. How often does the (pro-Israeli) entertainment industry depict and even glorify behavior that most psychiatrists would consider deviant and socially harmful? What might be the long-term effect of exposing viewers, especially younger ones, to the portrayal of such behavior? Think of the cardinal virtues of justice, prudence, fortitude, and temperance. Think of the theological virtues of faith, hope, and charity. Is there something missing in the world in which children are now growing up?

The US is in debt for several trillion dollars. To keep itself afloat, the US must do anything to appease China and other countries, in the vain hope that such an insane debt can be kept alive. Yet of the $15 billion spent on US foreign aid every year, $3 billion goes to Israel — again, money that could be far better spent on other things. What has Israel ever done in return for that 3 billion? For example, when have Israeli troops ever fought alongside American troops?

The (US) Immigration Reform Act of 1965, the Canadian Multicultural Act of 1988, and similar acts in other countries, have had two main effects: an enormous increase in the annual immigration rate, and an equally enormous shift towards immigrants from countries that lack histories of freedom and democracy. In general, these new immigrants are from non-European countries. Why have the governments of the US, Canada, and other countries allowed such things to happen, when the obvious effect is the gradual destruction of their own societies?

Very few of these new immigrants even have English as their first language, and they are therefore unlikely to understand the ramifications of their own displacement of Europeans. As a result, these immigrants tend to see the new country as vacant land, not as an established nation with existing laws, customs, and moral values that should be respected.

A large influx of immigrants from impoverished totalitarian countries has several other effects. Employers see these immigrants as a large number of either investors (if rich) or sweat-shop workers (if poor). In either case, the immigrants are also seen as purchasers of American goods and services. In the case of products that are increasingly subject to scarcity (e.g., housing), the immigrants are seen as eager new speculators in the market. In general, politicians see the new immigrants as sources of political support — every party is eager to garner the ethnic vote.

Yet if the US is a democracy, how can we explain the fact that most of the major decisions made by its government are contrary to the wishes of most Americans?

The answer is that government power is now disconnected from democracy. Of the many forms of disinformation in political discourse, one of the worst is the false dichotomy of “left” and “right”. It is a matter of little importance whether the populace is enslaved by a “left-wing” government or a “right-wing” government. What is of far more importance is whether a party espouses totalitarianism, or whether it espouses freedom.

Adding to the absurdity of “left” and “right” is the fact that the dominant parties in the average Western country are now virtually identical. At election time, the slogans of one party are the slogans of the others. As Westerners, we are losing our sense of identity, losing our sense of values, and losing our knowledge of two thousand years of political progress. We are all now learning to live in the one-party state, and enslavement to that state is the future that awaits us unless we take matters into our own hands again.